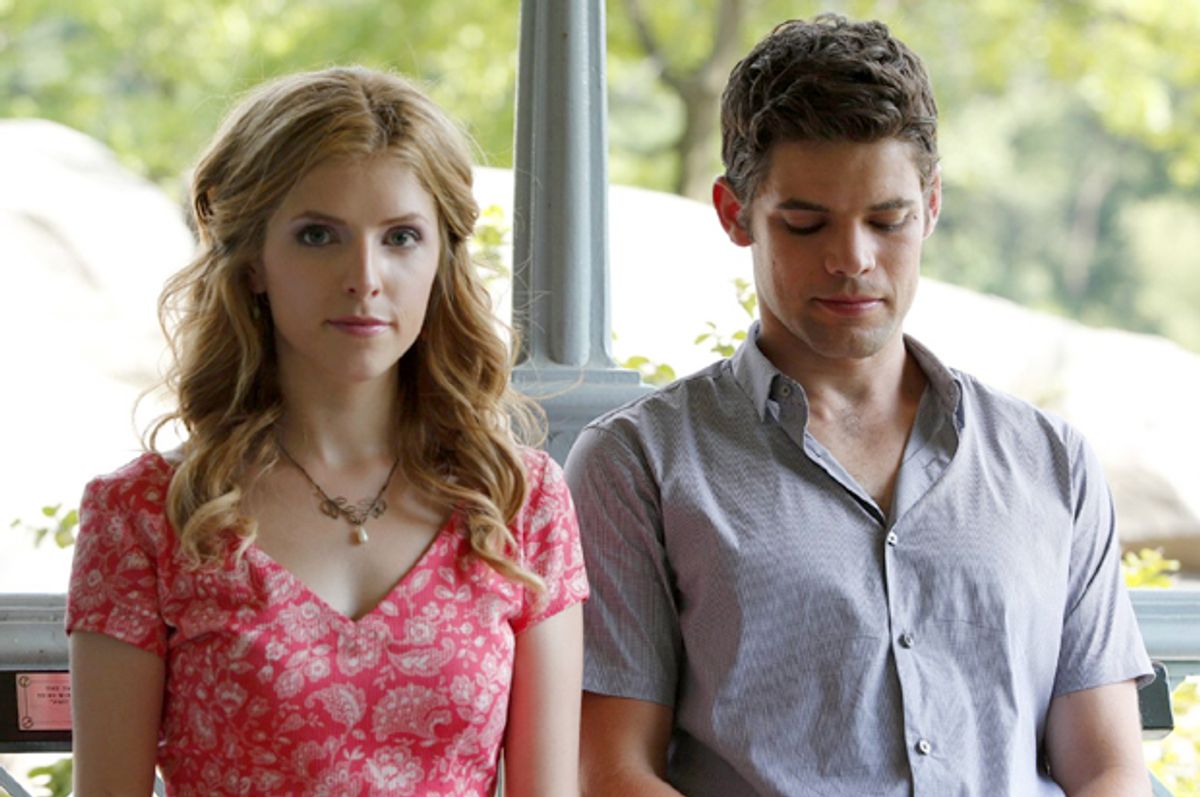 My first serious boyfriend broke up with me on a street corner. It was like living inside a Taylor Swift song, screaming and crying (no kissing) in the rain. But that wasn’t the worst or even the most memorable part. While we were fighting in a cab with the meter running, he told me, “I had never been with a woman as successful as you. And it was weird.” He was 12 years older and about to be laid off. Meanwhile, I had landed my dream job and was on the verge of a promotion. That’s enough to mess with anyone’s ego. Career and romance rarely mix, particularly among ambitious, competitive twenty-somethings.

As I watched Cathy (Anna Kendrick) and Jamie (Jeremy Jordan), an actress and a writer, respectively, singing about their crumbling starter marriage in "The Last Five Years," the new film adaptation of Jason Robert Brown's 2001 musical, a wave of familiar schadenfreude washed over me. You know their relationship is doomed from the start, and not only because of how Brown structured the show — Cathy begins telling her side of the story from the vantage point of the end of their marriage, while Jamie starts at the beginning of their relationship — but because their romantic motives often seem so enmeshed with their careers and ambitions. At the end, Jamie's writing career is flying high, while Cathy's stage ambitions have been dampened, and that's part of what destroys their marriage.

Even though the plot is brutally honest in a way few musicals are, it’s amazing how the culture of romance among career-climbing young people hasn’t changed since Brown started writing the stage musical in 1999 after his own divorce. Director Richard LaGravenese’s screen adaptation pushes this idea to the next level -- he places both characters in every number, unlike in the stage version, which is primarily monologue numbers. For example, while Jamie sings his love-and-career anthem “Moving Too Fast,” there’s a scene between verses showing Cathy being cut from an audition. Foreshadowing!

When Cathy sings “I Can Do Better Than That” at the beginning of her courtship with Jamie, she compares her own dating triumph (he's a hotshot, rising literary star, after all) to that of her knocked-up high school friend. But later, she finds herself in Jamie’s shadow as she attempts to make his success her own, somehow, in “A Part of That.” Jamie makes the decision to take “the next step together” with their relationship after he learns Random House wants to publish his first book, but he only makes a commitment to Cathy once his career is in place — and he’s still worried things are moving too fast.

Cathy pushes back against being his plus-one to yet "another party," and Jamie tells her, “If I didn’t believe in you, I wouldn’t have loved you at all.” This, of course, after he says, “I will not fail so you can be comfortable, Cathy. I will not lose because you can’t win.”

Does he love her, therefore he believes in her? Or did he believe in her and that’s why he fell in love with her, and now that her career is faltering and his is soaring, he’s not so sure? (Spoiler alert: He cheats on her immediately after.)

What would have happened had Cathy achieved her fame first? My experience suggests it's possible Jamie would have left her because of his bruised ego. Would Cathy have left Jamie if he threw himself a pity party of despair, like Cathy does? Their relationship hinges and cracks on career competition. That can be the trouble with artists getting married in their twenties. If you’re looking to become an artistic power couple, you just have no clue if that person will achieve the success you envision for them.

Of course relationships are hard, no matter what. Another charming guy I dated ended things before anything ever even became official because “all relationships end eventually, so why not stop before you even start?” And as Louis C.K. said in the "Louie" pilot, even if you do find your true love and spend your entire lives together, the best-case scenario is “you’re going to lose your best friend, and then just walk home from D’Agostino’s with heavy bags every day, and wait for your turn to be nothing also.” But would this slow, simmering explosion of a divorce have happened if Cathy and Jamie were both accountants? Or if only one of them had an artistic profession and they weren’t constantly comparing their achievements? So much of creative success depends on luck and talent, two factors that are impossible to control and impossible to predict for another person. The Hollywood marriages you never hear about (i.e., the successful ones) are often the pairings where one person isn’t in “the biz.”

But are there any young accountants today who don’t also have a side career as an entrepreneur or a cabaret singer? Doesn’t everyone have a creative passion they're trying to pursue? Millennials have been raised to go after their dreams and not to take “no” for an answer, which makes young people search for perfection -- in career and in love -- that does not exist. Take a date to see "The Last Five Years" on Valentine’s Day, and you’ll really know whether it’s worth keeping them around. Or take a group of single friends and be thankful if the only career you have to worry about is your own.

Suzy Evans is a writer and editor based in New York. Her writing has appeared in The New York Times, The Hollywood Reporter, Billboard, Backstage and American Theatre.