America's founding obsession: What we really talk about when we talk about the founding fathers

Even centuries later, the memory of the American Revolution is abused in the service of political gain. Here's why 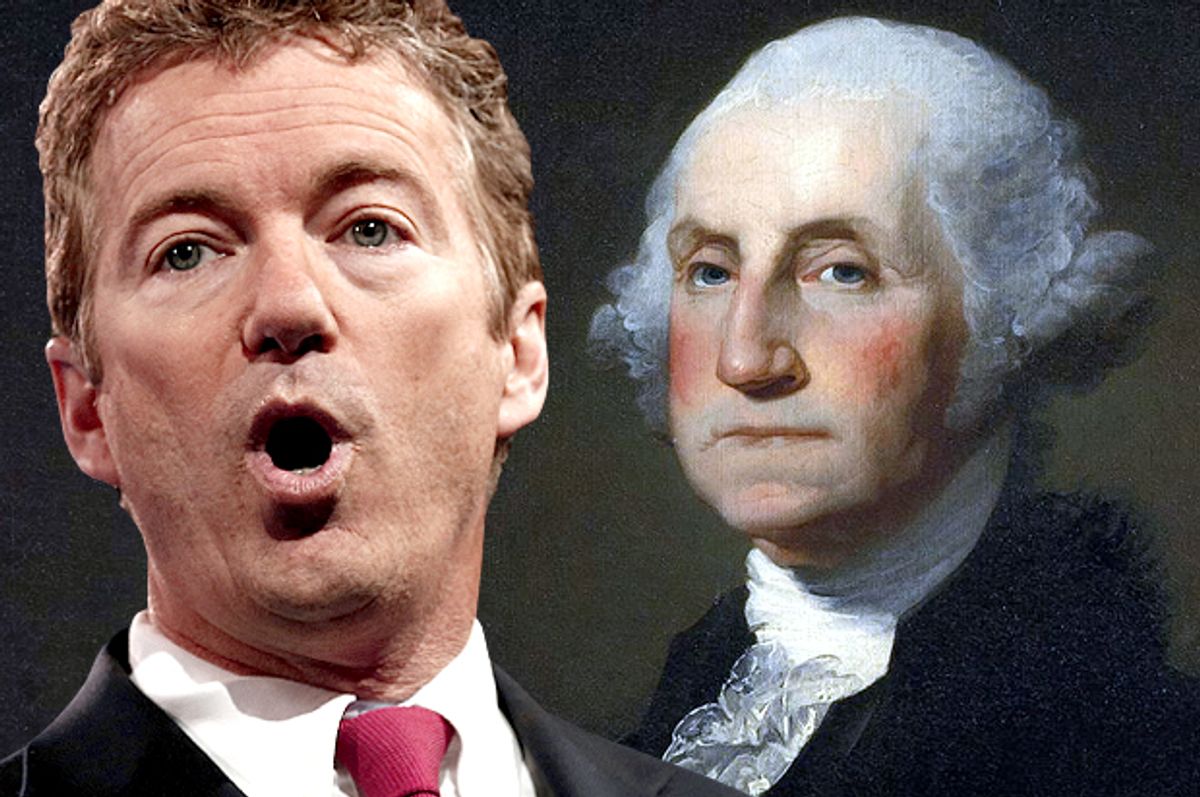 Excerpted from “Fighting over the Founders: How We Remember the American Revolution.”

Many Americans and foreign observers have noted that we seem to be the only country whose citizens want to be in conversation with our founders, as though men dead for two centuries would still have much to tell us. There’s more than a little truth to that charge, to which some Americans reply that the United States is exceptional among nations and that our founders possessed uncanny sagacity that transcends time and space. Both sides are partly right. Neither the United States nor its founders hold a monopoly on wisdom, political or otherwise, and a quick look at a globe shows that there are many democracies no less functional and no more dysfunctional than ours. Furthermore, all countries have their heroes, their exemplars who appear on stamps and money, are the subjects of biographies and movies, get mentioned in political speeches, and become cast in bronze.

The United States is not the only country that engages in what sociologist Robert Bellah called a “civil religion.” Nonetheless, the American Revolution was indeed unusual, as is its relation to the American present. Unlike many other countries, the United States can point to a period of less than two decades as its seminal founding moment. Most other nations have either multiple founding moments or have lived through various evolutions. Unlike the United States, most countries trace their origins to ethnicity and language, rather than to the establishment of a particular political structure. The United States retains its governmental form from the federal constitution that served as the Revolution’s crowning achievement, and so its citizens look to the people who established that form as authorities on it. Most other countries have been through multiple iterations of their national governments. The founding generation of the United States was a particularly articulate bunch, whose vast public and private writings have been preserved, ever at the ready. Few other nations have a single generation of leaders that happen to have left such a wordy legacy, always available for apparent authority and, perhaps, exploitation.

Americans debate that legacy because we perceive a lot is at stake. In any society, ownership of an authoritative past provides a powerful political rhetorical weapon. Ernst Renan, one of the first analysts of nationalism, proposed that a nation is composed of two principles: “One is the possession in common of a rich legacy of memories; the other is present-day consent, the desire to live together, the will to perpetuate the value of the heritage that one has received in an undivided form.” More recently, theorist Benedict Anderson conceived nations as “imagined communities.” Countries are too big for people to know more than those in their local communities. What binds them, then, is a sense of common belonging, and among those things that people in a nation share is a store of memories. In all nations, the ability to claim an authoritative version of crucial national memories makes for powerful ammunition in fundamental debates. Defining memory defines the nation, and defining the nation means the privileging of some values and policies over others. We’ve long sparred over government’s role in economic and civil affairs. Did we have a primarily limited Revolution, dedicated only to independence, or a broader Revolution that was also about equality? The Revolution’s richness as a historical process, its broad cast of characters, and the expansive scope of its contrasting principles offers a great deal for us to latch onto. In speech, poetry, and literature, a “synecdoche” is a part that stands in for the whole. In American civic and cultural life, the Revolution stands as the perfect synecdoche for the nation, specific enough for us to be able to use its words and deeds but distant enough so that the differences in detail between the eighteenth century and today can be glossed over.

Our recent rise in interest with the American Revolution coincides with anxieties concerning nationalism. The phenomenon of Revolution-related best sellers and movies arrived at the cusp of a cultural moment in which Americans increasingly associated patriotism with militarism—a typical reaction of a nation at war, and one that the United States has experienced before. The biggest scare in the headlines during the summer of 2001 was shark attacks, notwithstanding that the probability of shark attacks continued to be far lower than being struck by lightning, even for beachgoers. But after September 11 that year, an unabashed American patriotism combined with a faith in violence to achieve security washed over the airwaves. The rhetoric of fear to be resisted by violence resonated in American news media. The U.S. Department of Defense’s brilliant policy of “embedding” reporters with military units during the U.S. invasion of Iraq led to breathlessly supportive press coverage, especially because the practice lent itself to focusing on human interest stories rather than investigative reporting. Military press conferences held in a quarter-million-dollar TV-network quality briefing room from Qatar further glamorized a war while minimizing its negative consequences. Perhaps there was no better example of governmental media manipulation than the Bush Administration policy of forbidding press photography of American servicemen’s coffins. Lest we think these attempts by the federal government to influence public perceptions during a war were either new or overly partisan on the part of a Republican president, we should remember that the Democratic Roosevelt Administration pioneered similar strategies during World War II. National defense sometimes become conflated with national values. Recent invocations of the American Revolution can serve as bellwethers in the greater cultural debates concerning whether varying opinions and the challenging of leaders weaken the nation or contribute to American vitality.

For the pluralistic nation that is the United States, the tussle over the Revolution has also increasingly become a debate about belonging. As such, the Revolution has served as a roundabout way to debate the merits of multiculturalism, that is, the idea that citizens of an ethnically, racially, ideologically, and religiously diverse nation like the United States should embrace and celebrate its many pasts and presents, rather than cling to one story for everyone. Is our country primarily white, primarily Christian, primarily heterosexual? If so, then we might emphasize the founding fathers; if not, then we might consider many other Revolutionary-era Americans. Opponents of multiculturalism argue that it unnecessarily divides Americans rather than emphasizing their commonalities. In some ways, multiculturalism’s friendly critics have offered more trenchant critiques. They charge that its categories are too rigid or so socially constructed as to be meaningless, that it fails to account for multiethnic people; that it further privileges gendered cultural norms; and that cultural diversity has often been pursued at the expense of class diversity, especially among whites. The engagement with multiculturalism in the academic study of the American Revolution has resulted in the broadening of topics of inquiry and thus broadening understanding, as well as, in some cases, fundamentally altering considerations of what caused the Revolution. The main challenge with the application of a multicultural ethos to interpretations of the American Revolution is that multiculturalism is a social and philosophical sensibility, rather than an explanation of historical process or reality. By the same token, a past that only celebrates the founding fathers is no more representative of the fledgling United States, a nation born with about 2.5 million people, women and men, over a quarter of whom were people of color, and who worshipped in many religious denominations (or chose not to worship at all).

Those battles over the Revolution’s meaning raged even before the ink was dry on what we now consider our sacred founding documents. As early as the 1780s, farmers protesting against raised state taxes and other policies friendly to creditors complained that such policies violated the “Spirit of ’76.” Alexander Hamilton and James Madison, allies in the writing the Federalist Papers to promote the Constitution’s ratification, eventually sparred over the original intention of various clauses. Thomas Jefferson continued calling his enemies “tories” for decades. In the 1820s, wealthy Bostonians began celebrating a hitherto-forgotten local event by calling it a “tea party” so as to downplay the radicalism of the mass destruction of private property. Some abolitionists seized on the Declaration of Independence’s promise that “all men are created equal,” while William Lloyd Garrison blasted the Constitution as “an agreement with hell” for its entrenchment of slavery. Both sides in the Civil War claimed to be acting on the founders’ legacy. Turn-of-the-twentieth-century nativist writers and politicians bemoaned what they perceived as the cultural chasm between the new immigrants and Anglo-Saxon American Revolutionaries. Various ethnic groups countered with founders of their own: Baron Friedrick von Steuben (German), Tadeusz Koscuiszko (Polish), and Haym Solomon (Jewish). Isolationists seized on Washington’s warning against “foreign entanglements” to oppose action against Hitler in the 1930s, while those favoring the allies called it a fight against tyranny no less than the Revolution. The founders were both in favor of and against the Vietnam War and civil rights for African Americans and women. Thomas Jefferson applauded President Ronald Reagan’s attempts to devolve some federal responsibilities to the states but not his exploding of the federal deficit. And Alexander Hamilton, whose extramarital affair with Maria Reynolds was the first sex shocker in U.S. politics, was both sympathetic with and appalled by Bill Clinton during the controversy over his relationship with Monica Lewinsky. We continue today to enlist the founders for our own political battles and to invoke the Revolution in our culture.