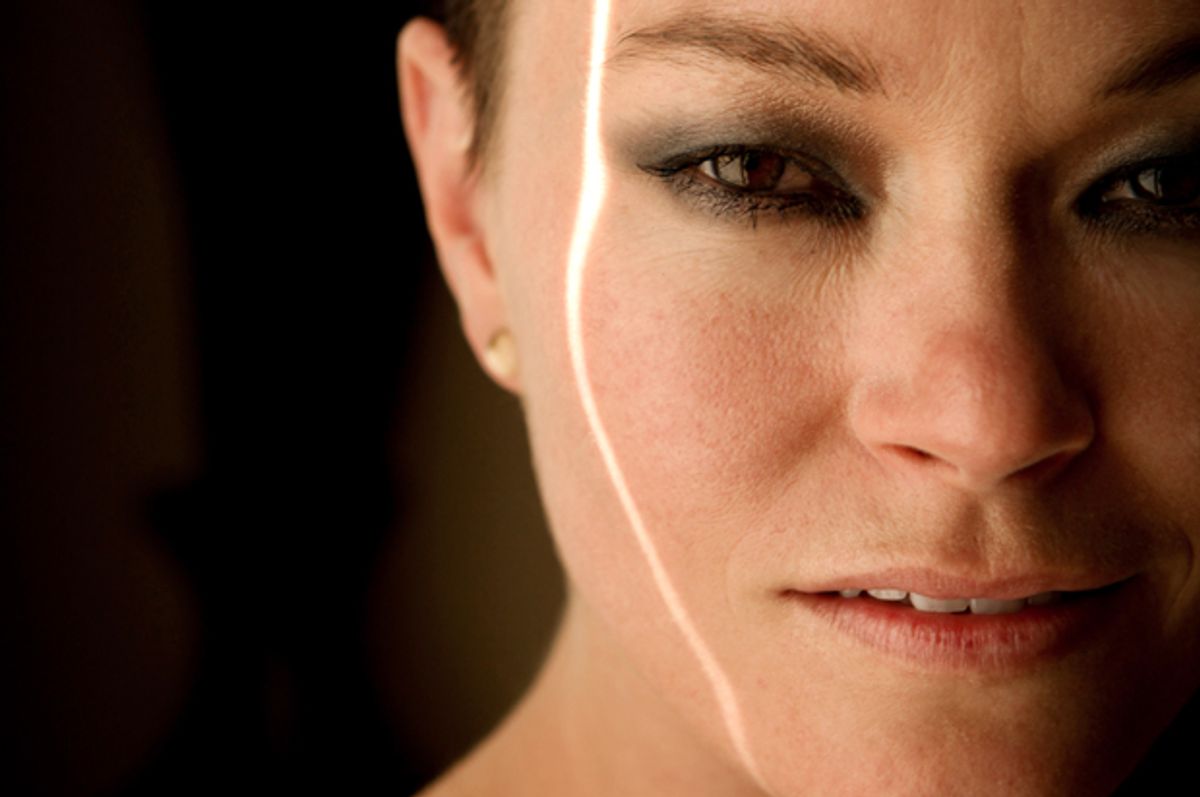 Lee was inspired to create the book by their own coming out to family members in 2010. As porn star Stoya puts it in the book, “Murphy’s Law of Inappropriate Behavior states that if you make a habit of taking your clothes off in public, eventually everyone in your family (including members so distant they share less DNA with you than a chimpanzee does with a cuttlefish) will somehow stumble upon documentation of what you’re up to.” For Stoya, that meant telling her grandmother, “I’m using part of your name as my stage name.” For Lee, it meant giving their born-again Christian mother and grandmother time to digest the news before stumbling across it. Lee considers the process ongoing, calling even the use of their image at Salon “a calculated risk.”

What have you learned about yourself and other performers' lives as you've worked on the book?

I’ve learned that I harbor internalized sexual shame, which I’m working consciously to undo. I’ve also learned to be gentler with myself in the process, and that it’s OK to not come out. I think it's OK to withhold information. Writing for this book was a vulnerable process for a lot of the contributors, myself included.

You write that your coming out process is "far from complete." Do you eventually plan to come out to everyone in your family?

I'd like to one day soon come out to my little brother and sister, and eventually some of the younger members of my family. Eventually it would be nice to be out to my extended family, mostly so that I don't have to feel like I have to avoid the topic at family reunions. However, I'm focusing on healthy conversations with my close family first and foremost.

Most people generally don't have to “come out” as being heterosexual, or come out as not being transgender. For those of us whose lives exist outside of what society considers “normal,” the issue of disclosing information about ourselves can happen daily, and being “outsiders” is a vulnerable and often dangerous position. People are afraid of what they don't know, and most know very little when it comes to sex and gender.

Within the book are stories from queer and trans/genderqueer performers such as James Darling, Cyd St. Vincent, Emma Claire, Chelsea Poe, Tobi Hill-Meyer, Drew DeVeaux, Denali Winter, Papí Coxxx, Courtney Trouble, Lyric Seal and myself. All of them mention links between coming out in terms of their sexuality and gender.

That we are uneducated and incapable of intellectual pursuits. There are assumptions that we don't have boundaries, that we will do anything sexual for money, and that we will not enjoy it. That performers are victims; that we are sex trafficked and forced into pornography. There's also the misconception that we don't have families, partners or children, and that if we have parents, they must be disgusted by us. I hope some of the stories in this book can change these misconceptions

As the Internet has become more prevalent in the past decade, my generation of performers may be the last whose parents are not regularly or recreationally online. It was interesting to read Joanna Angel’s shock at finding her image on a punk music forum mere hours after launching her website, and not understanding how they were able to get a copy of the image.

It can help to create a support base with other performers and friends, should you need someone to vent to, or need a place to stay the night. If you can afford a therapist—and importantly, can find one who is not biased against sex work—it can be helpful for family to discuss their concerns with a third party. Kink-aware professional networks can be a resource.

The stories in the book are anecdotal; it's not meant to be a literal guide, but a collection of personal accounts that other performers, family members, and anyone outside the industry can potentially relate to, and find a shared connection.