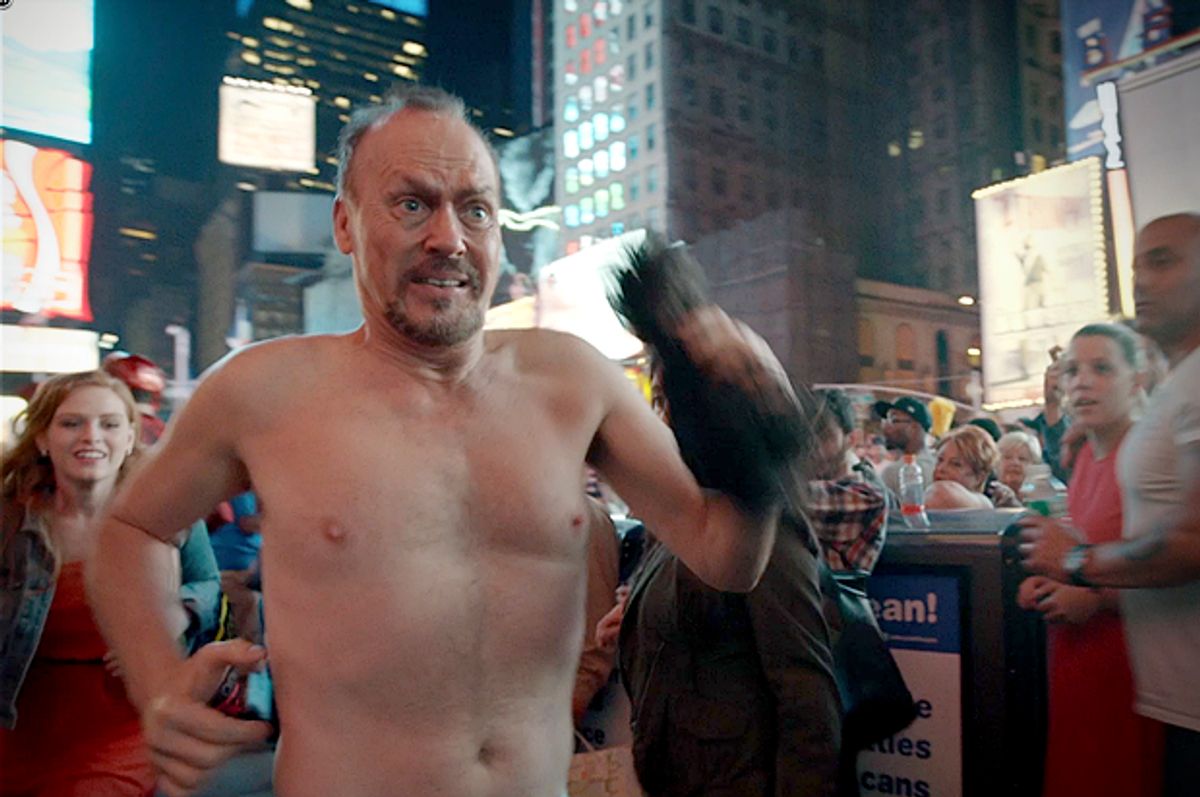 In December, as part of Grantland’s year-end “What We Saw” series, editor Chris Ryan penned an ode to the tracking shot. The technique, he wrote, “just feels so wonderfully cinematic, a unique element of the medium….Deployed judiciously, tracking shots can make you feel like you are experiencing some kind of heightened version of moving life. I like a lot of directors, but the ones I love tend to be able to move their cameras.” Primarily concerned with Cary Fukunaga’s stunning six-minute raid sequence from "True Detective’s" fourth episode, Ryan’s piece also name-checked some of the shot’s most celebrated practitioners, including Martin Scorsese, Orson Welles and Brian De Palma.

Conspicuously absent from that list, however, was Alejandro González Iñárritu. Constructed to look like one continuous shot, Iñárritu’s "Birdman or (The Unexpected Virtue of Ignorance)" has rivaled Richard Linklater’s "Boyhood" as 2014’s awards season darling. Along with taking the top prize at the Directors' Guild of America Awards, Birdman has earned two Golden Globes and garnered nine Academy Award nominations, including best picture, best director and best cinematography for Emmanuel Lubezki. (He won last year for Alfonso Cuarón’s "Gravity," which upped the tracking-shot ante with its own 17-minute opening.) A staple of year-end top-10 lists, the film’s bid for formal virtuosity enthralled even critics underwhelmed by Birdman’s content. “In the end, I’m not sure there’s much there, but who cares?” argued the Atlantic’s Christopher Orr, who named "Birdman" the third-best movie of 2014. “A film this inventive and stylish provides its own rationale.”

There’s indeed not much there. The comeback saga of Riggan Thomson (Michael Keaton), an unhinged, middle-aged white man who Used to Have It All, "Birdman" relies heavily on one-note female characters, “comic” depictions of mental illness, and uninspired jabs at vain actors, superhero franchises and the power of social media. While unimaginative content can be rendered imaginatively (think of Lubezki’s recent work with Terrence Malick), "Birdman" misses the mark. In his eagerness to be crowned tracking-shot king, Iñárritu mishandles the elements that make long takes so thrilling in the first place.

Part of the problem lies in the film’s very conceit: When a movie is structured as one continuous take, its duration no longer surprises us. That’s not to say length isn’t important or impressive (it is, after all, a long take), but a tracking shot’s element of surprise only works when, as Ryan reminds us, they are “deployed judiciously.” From the endless traffic jam in Jean-Luc Godard’s "Weekend" to Clive Oven racing through war-ravaged streets in Cuarón’s "Children of Men," the best long takes step unexpectedly into traditionally edited films and immediately heighten audience anticipation: How much longer could this possibly last? There’s no need to ask that of "Birdman," since every cut has been rendered invisible, every camera move preordained to flow into the next. Iñárritu courts our sense of wonder while leaving us with nothing to wonder about.

Great tracking shots explore not only the limits of duration, but also the limits of space. Consider the famous Copacabana shot in "Goodfellas," when Henry Hill (Ray Liotta) leads his date down a back staircase, through labyrinthine hallways and a bustling kitchen, right to the front of the club, where a table is set up just for them. Or the Dunkirk Beach sequence in Joe Wright’s "Atonement," where the camera weaves among soldiers and civilians as they fight, execute horses, hold each other, smoke, sing. Their frames teeming with characters all living their own ancillary stories, such tracking shots exemplify Ryan’s “heightened version of moving life.”

"Birdman’s" spatial possibilities, on the other hand, are mostly limited: dressing rooms, backstage corridors, the bar down the street where the shrewish theater critic writes her takedowns by hand. Lubezki’s camera is admirably agile within these tight spaces, but mostly it’s called upon to hover during scenes that don’t require or benefit from Iñárritu’s continuous approach. There is one major exception about halfway through the film when Riggan, locked out of the theater during a smoke break, must march around the building in his tighty-whities through Times Square and a throng of camera phones. For the first time, "Birdman’s" form springs to life. Lubezki’s camera finally has a reason to follow.

Of course, "Birdman’s" filmmakers insist their camera always has a reason to follow, even if they can’t quite agree on what that reason is. According to Lubezki, “Life is continuing, and maybe not having cuts was going to help immerse the audience in that kind of emotional rhythm.” (Note that “maybe.”) On "Fresh Air," Edward Norton explained Iñárritu’s thinking to Terry Gross:

[Iñárritu] said right away, look there’s a reason for doing this, which is, I’m telling a story about a person in a spiritual crisis who might actually be losing his mind. He might actually be going crazy. We’re not sure, and I don’t ever want to leave the bubble of his anxiety. I want the audience with him inside the bubble of his mounting panic and all the things that happen to him without any break because I want them to experience life in this seamless way that he’s experiencing it. And I think as soon as he said that, and we realized he’s doing this because he’s trying to create not a showy, you know, presentation but he’s trying to create a really deep emotional sensation that aligns the audience with the main character, it became really exciting.

Other filmmakers and critics have justified potentially showy tracking shots by emphasizing how the technique is rooted in character. Scorsese has explained how the Copacabana shot illustrates the lack of  “separation between [Henry Hill] and the world that he was trying to get into ... The camera just glided through this world. All the doors are open to him.” (Jake LaMotta’s march to the title fight in "Raging Bull" accentuates a similar feeling.) Ryan likewise points out how, on "True Detective," “Fukunaga’s camera functions as a kind of character in the house. It’s Cohle’s perspective, just heightened. The camera pauses to gaze, to wander, to linger on characters.”

Whereas Scorsese and Fukunaga represented their characters’ heightened perspectives, Iñárritu too often reminds us of the people behind the camera. Twice the camera heads to the theater’s roof to watch Emma Stone and Edward Norton’s uneasy flirtation. At one point, the camera stays in Naomi Watts’ dressing room to watch her make out with another actress. We’re no longer seeing things through Riggan’s eyes, but through the eyes of Iñárritu and his three (male) co-writers. That gang includes Armando Bo, who told Creative Screenwriting that the film “works as one shot because it was written for that. It was one of the first ideas Alejandro had, even before the character.” Iñárritu might think he successfully fused his one-shot concept with Riggan’s character, but Watts’ scene makes the arbitrariness of the film’s self-imposed long takes alarmingly clear.

In his review of Gus Van Sant’s shot-by-shot remake of "Psycho," Roger Ebert recounted the story of a child prodigy who flawlessly played Chopin for a famous pianist. The elder musician responded: “You can play the notes. Someday, you may be able to play the music.” There is no doubt that Birdman is a technical feat, yet in their preoccupation with moving their camera, Iñárritu and Lubezki forgot how moving the camera is supposed to move us, too.