The show's latest ploy is to pit city vs. country and head vs. heart 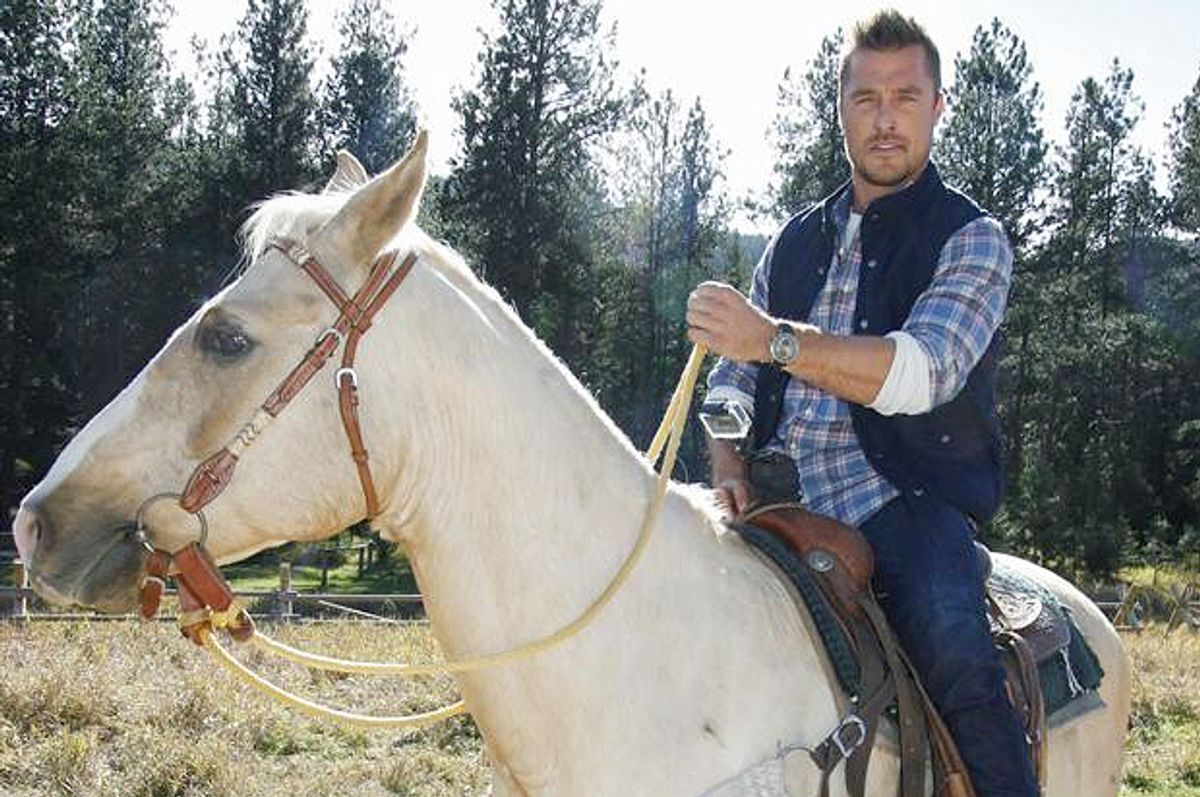 Geography has played a particularly outsized role in this season of “The Bachelor.” Since day one, we have been reminded that Chris Soules, our resident "Prince Farming," is a small-town boy through and through. Eligible Bachelor that he is, his hand in marriage comes along with a pretty big catch: His future wife has to be willing to pack up her life and move to rural Iowa with him.

This weekend, the veil was finally lifted: The ladies visited Chris’ hometown of Arlington, Iowa (population 429), and it was worse than any of them could have anticipated. To clarify, Arlington is not just a small town -- it’s microscopic. The girls need all of about thirty seconds to cruise through downtown, with its boarded-up establishments, deserted streets and total lack of restaurants, bars or stores. Britt, who is a “waitress” in Hollywood, understandably has a freakout, saying she could never imagine living here. (Andi, last season, axed Chris for similar reasons). Later, Chris takes a stunned Jade around and explains how many of the local businesses have shuttered in recent years, and he looks sad as he describes the town’s decline. We feel for him — this is clearly a place deep embedded within him, one that he can’t imagine leaving -- but it’s still not enough to convince me that any of these girls should give up their lives and move here. All through the episode, I was shaking my head in disbelief. Nope. Don’t do it. Run for the hills, ladies.

My visceral reaction was exacerbated by the decision to air the Arlington episode on back-to-back nights with the hometowns episode, wherein Chris visits each of the women in their respective towns and cities. The contrast was most pronounced with Whitney, the clear front-runner in my mind, who lives in Chicago and works as a fertility nurse. We see her office and she shows off her fancy-shmancy insemination techniques, and we are suitably impressed she has a real career. (Remember: this is a show where “sports fishing enthusiast” qualifies as a professional designation.) This show has always subscribed to traditional gender roles -- recall Chris, last season, gently suggesting that Andi be a homemaker when she asked about her opportunities in Iowa -- but the fact that Whitney should be made to move to a town without so much as a coffeeshop, let alone somewhere she can practice the career she has been building for years, seems downright cruel. As much as she’s my favorite to win, I also find myself rooting against her because I don’t want to see her give up her livelihood to be a farmer's housewife (such is the eternal struggle of the feminist "Bachelor" viewer). But as with anything on "The Bachelor", I also constantly have to police my own reaction, because chances are, I’m feeling exactly what the producers want me to feel.

While it’s easy to get swept up in the hypnotizing whir of tears and roses and perfectly-coiffed side ponytails, we mustn't forget that "The Bachelor" is nothing if not an exercise in audience manipulation, an ingeniously-edited spectacle designed to elicit a certain response in its viewers. Sure, Chris’ farm is in Arlington, but Cedar Rapids, a city of 128,000 and the second largest in the state, is only an hour away. Fayette, Iowa is a 16-minute drive and is home to Upper Iowa University. Iowa City, where Hannah Horvath briefly did a stint at the Iowa writer’s workshop, is an hour and forty minutes. There is a hospital in Waterloo, Iowa, an hour away, presumably where Whitney could work as a nurse or Becca could do her chiropracting-assisting. None of these commutes are any worse than driving from Hollywood to Santa Monica in heavy traffic. (Mindless entertainment though "The Bachelor" may be, I sure have learned a lot about Iowan geography).

From the get-go, Chris has been pretty adamant about wanting to stay in his home-state, which is fair enough. That was always the big condition going in, and it's true that this sort of lifestyle change would be an adjustment for anyone. Then again, it’s also a classic example of reality shows playing an elaborate game of intelligence chicken with their audiences, pushing suspension of disbelief as far as they can before we call bullshit. The Arlington episode takes the lie of “The Bachelor” even one step further — how many of these couples ever actually last? — by adding in this bizarre "Fear Factor"-esque stunt: can you survive in town that was already tiny before the recession? In doing so, it taps into our well-documented obsession with rural disaster porn. As Ali Barthwell wrote in her Vulture recap: "The central question of this episode is 'Can you live in Arlington?' Arlington’s slogan is 'Where hills and prairie meet.' Arlington is slightly larger than one square mile. The population is 429. The pastor wears Call of Duty T-shirts and hangs out with his friend on his front porch. The coffee shop is just a guy brewing coffee in an abandoned warehouse. Arlington is a metaphor for the failing middle class and the decline of rural farming communities."

That’s exactly what the show wants you to think, but the truth is likely more complicated. Arlington has always been teeny-tiny, even before the recession — in the 2000 census, its population didn't exactly boom at 490 strong. Detroit it's not, nor has it ever been, and extrapolating a metaphor for the failing middle class from one very small farming community feels like a stretch. And I'd guess that the producers picked the most bumpkin-y of all images to depict a typical day in the town — surely the pastor doesn't generally preach in a video game tee. But reality TV has long had a sick, voyeuristic fascination with rural America and loves to propagate outdated hillbilly stereotypes (it's no surprise that this season has been a veritable parade of dumb farming clichés, from driving tractors on the streets of LA to drinking cow's milk straight from the udder). While "The Bachelor"'s Farmer storyline may not be not as bad as “Honey Boo Boo” or “Buckwild,” it’s part of the same nasty impulse to point and laugh at rural communities, while simultaneously triggering the automatic defensiveness that people in the rural parts of flyover states feel when they're represented (or misrepresented) on mainstream TV.

In the same vein, the much-repeated notion that Chris has to come on "The Bachelor" in order to find a wife because there are no single women in rural Iowa is ridiculous. Sure, he might have fewer options than if he were from New York or Chicago, but I have no doubt that after an hour hitting the bars in Cedar Rapids or Des Moines, Chris could find someone who’d be willing to move to his snazzy rural mansion and make a life with him (no doubt someone much more comfortable with farm life than our current crop of "Bachelor" contestants). Rather, the reason Farmer Chris was picked to be "The Bachelor" is because the producers know that the home vs. heart, city vs. country, love vs. career is a dichotomy they can milk, along with providing a wealth of well-honed prejudices about rural life to which they can appeal.

Last season, when Andi was in the power position, we saw a little more clearly that Chris' hard line isn't quite as hard as it seems. As Chris told her, “There's a lot of opportunities for really smart attorneys in Iowa," suggesting that she could move her legal practice to Cedar Rapids, and expressing his willingness to compromise (as he put it, “these are all negotiable things and things to discuss, and all I can say is I’m willing to make sacrifices"). There's a reason that this sort of conversation hasn’t happened yet this season: Dramatic ultimatums make for better TV. So as much as I don't want Whitney to leave Chicago and her career for the sake of a farmer she met on TV six weeks weeks ago, I'm also wary of falling into the show's traps. To even get upset on some hypothetical wife's behalf, we have to swallow the preposterous lie that they wouldn't be willing to live in, say, Cedar Rapids, where they could both have careers and a Target and a neighborhood Starbucks and still be able to drive down to his folks' for Sunday dinner every week. Arlington, Iowa might be a very small town with barely an amenity in sight, but it's hardly the inescapable pit of despair that the show would like for us to believe.