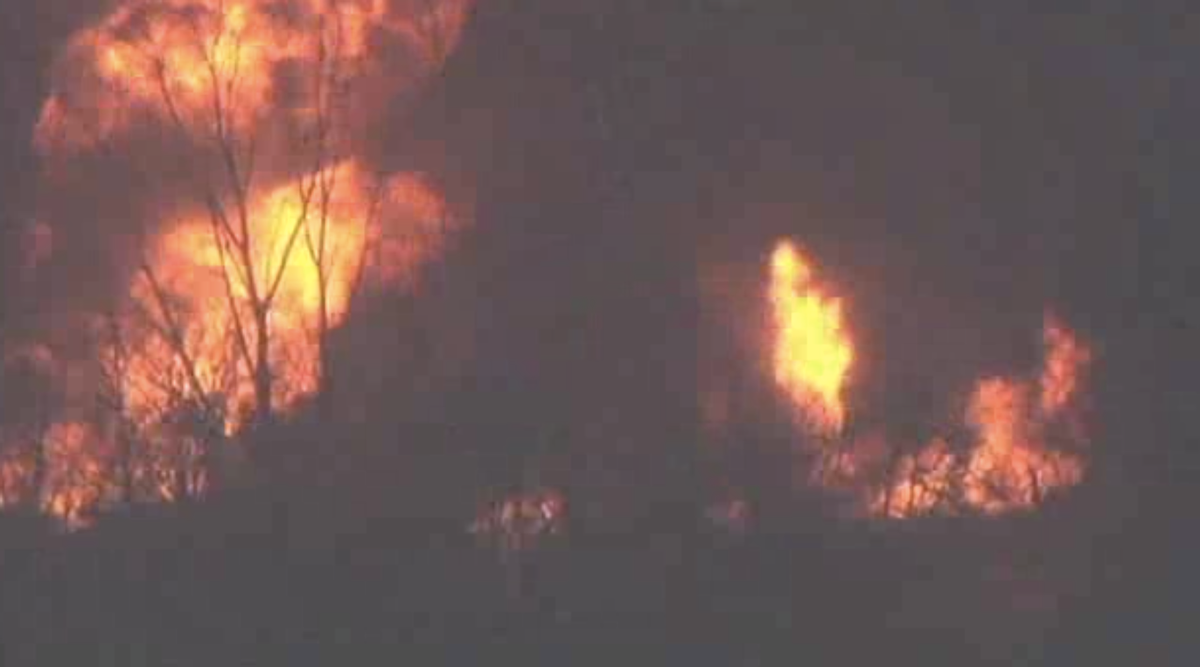 A train carrying more than 100 tankers of crude oil through West Virginia careened off the tracks and burst into flames during a Monday afternoon snowstorm, the Associated Press reports, destroying one house, forcing hundreds of families to evacuate and threatening nearby drinking water.

“It was a little scary," David McClung, who lives a half mile uphill from the crash site, told the AP of the explosions -- one of which reportedly sent a fireball hundreds of feet into the air. "It was like an atomic bomb went off."

Train operator CSX reported no serious injuries, but West Virginia Gov. Earl Ray Tomblin declared a state of emergency, and officials shut down two water treatment plants over concern that the oil may have contaminated a tributary of the Kanawha River.

The AP has this dramatic footage from the scene:

The train was carrying crude oil from North Dakota's Bakken shale, which some believe may be more flammable and explosive than traditional crude. Bakken crude's been involved in a number of fiery rail accidents, including the July 2013 derailment that killed 47 in Quebec.

In light of the "increasing volume of Bakken being shipped by throughout the U.S. and the large distances over which the product is shipped" -- from 9,500 rail carloads in 2008 to 415,000 in 2013, traveling on average over 1,000 miles to coastal refineries -- the U.S. Department of Transportation is currently considering stricter safety regulations for oil by rail. According to Reuters, the CSX train was hauling the newer model tank cars being promoted by U.S. and Canadian authorities, because they are supposedly less prone to puncture than the older models.

Rail, it's worth remembering, isn't the only risky means by which oil is transported throughout the United States: just last month, a pipeline carrying Bakken crude spilled over 50,000 gallons of the oil into Montana's Yellowstone River, causing a complicated clean-up scenario and leaving thousands temporarily without drinking water.