Nudity and "The Bachelor": What a contestant's Playboy past reveals about double standards and sex 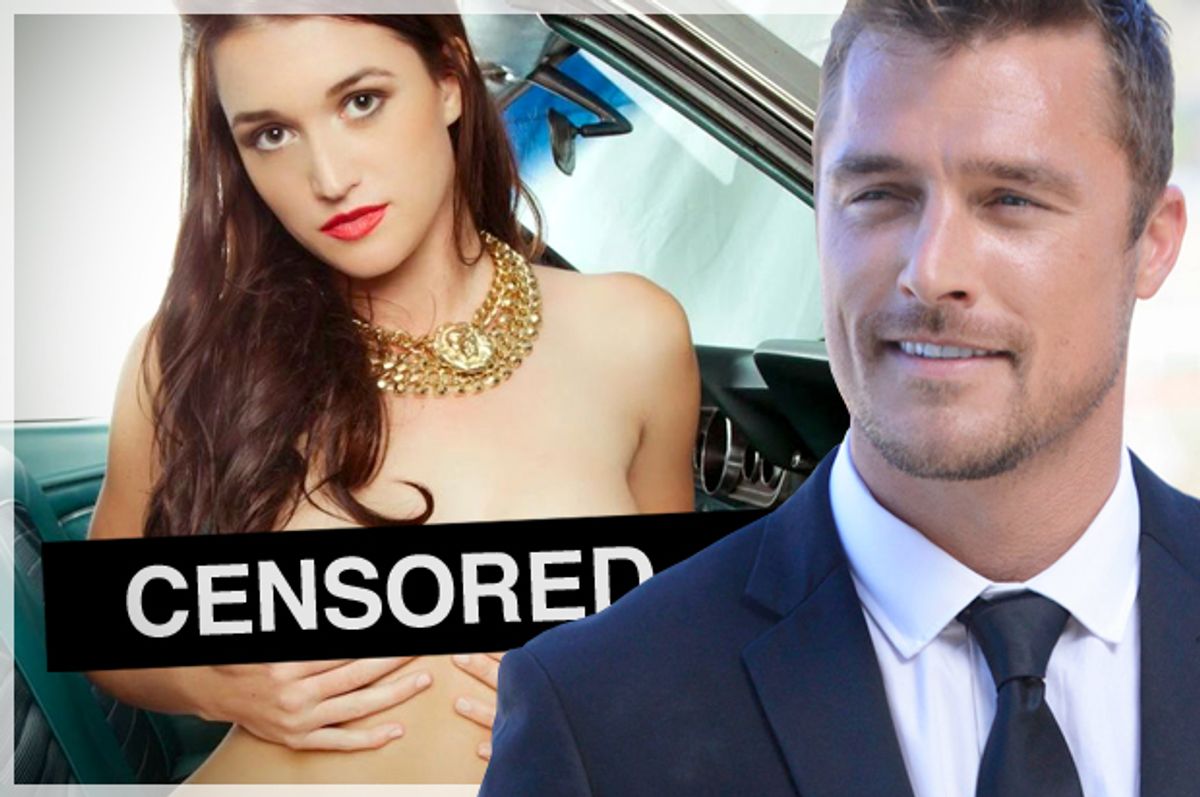 Last night's episode of "The Bachelor" finally delivered on a moment that has long been hyped as the SHOCKING REVELATION of the season: that a member of Chris' reality-TV harem had once posed for Playboy. As I watched Jade visibly squirming while working up the courage to tell Chris that she had posed nude, I shouted something to the effect of, "Relax! It's Playboy, not 'Big Booty Cum-Drinking Teen Sluts IV.'" Of course, that’s coming from a sex writer based in the San Francisco Bay Area, not a farm boy from a microscopic town in Iowa.

Indeed, when Jade finally told Chris, he got a little twitchy and seemed to have some difficulty swallowing. Cut to an interview clip in which he said, ”At this point, I’m very shocked. Jade seemed like a very innocent, somewhat shy girl. I would never have expected something like this to be a part of her past.” (By the way, it's only in the world of "The Bachelor," in which the Internet seems not to exist and dozens of women are dating the same man at the same time, that such a disclosure would take so long. Otherwise, she could reasonably anticipate that he might Google her and see the photos even before the first date.)

Ultimately, though, he showed himself to be a decent enough guy and told her the nude photos were NBD. “I judge you for the person you are and why you’re here, it’s not because of something like that that would ever really make me think any differently of you,” he said in his bumbling way. “Don’t feel bad about that; you are a beautiful woman. It’s not something that I feel would affect our relationship in any way.”

Of course, she was ultimately sent packing at the end of the episode, but he made a point of telling her that it was because their connection hadn’t developed as quickly as with the other women -- this is “The Bachelor’s” version of “it’s me, not you” -- in other words, it wasn’t because of the beaver shots. He also broke down crying as she was ushered off in the limo, and he said in an interview that sending her home might have been the biggest mistake in his life.

In reality -- such as it is in "The Bachelor's" case -- the harshest judgement of Jade's nude photos came from fellow contestant Carly during Sunday night’s episode. When Jade sat her down to reveal her big secret, Carly showed zero restraint and nearly fell out of her chair with shock. Her giddiness at the revelation, which she clearly interpreted as news of Jade being "damaged goods," was uncontainable. As she mocked in an interview, "Like, 'Hey Mom, don't Google my wife!’”

It is kind of incredible to see a show portray nudie pics -- especially naked photos that were consensually published for the world to see -- as shocking drama worthy of hyping throughout the majority of a much-watched TV season. After all, naked photos, and less so sex tapes, are seemingly ubiquitous these days. In fact, I feel like I have mental recall of the areolae of every major female celebrity out there. What’s more, Internet porn has made Playboy pictorials seem rather quaint. What’s a full frontal compared to spread ass-cheeks? A lot has changed since Vanessa Williams was forced to resign in 1983 as Miss America after her nude photos made headlines.

But not that much, fundamentally. Naked photos still have incredible power -- and that’s the thing that remains, even as naked female bodies become ever more accessible: the shame. We live in an age where deranged ex-boyfriends turn to revenge porn, misogynistic hackers release celebrity nudes and the victims of these acts are admonished for being “stupid” enough to take naked snapshots in the first place. That’s what made Jade’s story interesting: The thing being hyped -- the thing that “The Bachelor’s” producers knew would keep viewers tuning in -- wasn’t her intentional foray into nude modeling, it was shame. It was the question of whether her Playboy pictorial had ruined her shot at love.

That question is especially electric for women, who make up the majority of "The Bachelor" audience. We spend our lives walking an impossible tightrope of sexual expectation. As Amanda Marcotte wrote in a 30-year retrospective on Williams' photo scandal, "The incident perfectly crystallized the unfair and impossible expectation that starts getting applied to girls from the moment you hit puberty: You have to be sexy, but not sexual." You see contestants on “The Bachelor” interrogating that line all the time. Should I have kissed him so soon? Did telling him I’m a virgin make him think I’m a prude? As Carly so clearly showed, women are often drawn into harshly critiquing other women’s success at pulling off sexy-but-not-sexual.

"The Bachelor" itself walks that same cultural tightrope, gesturing to sex -- with the incessant makeouts and "fantasy suite" dates -- while rarely explicitly mentioning it. That's how we get this delicious irony of a show that asks a group of women to date and share massive amounts of saliva with a single man engaging in pearl-clutching over a woman's Playboy spread. It's no wonder "The Bachelor" franchise is so beloved: It perfectly embodies our schizophrenia over sex.