Could "Selma" take best picture?: Pulling for the Oscar underdogs in these 8 critical races

Even in categories with clear front-runners, there are bound to be some surprises 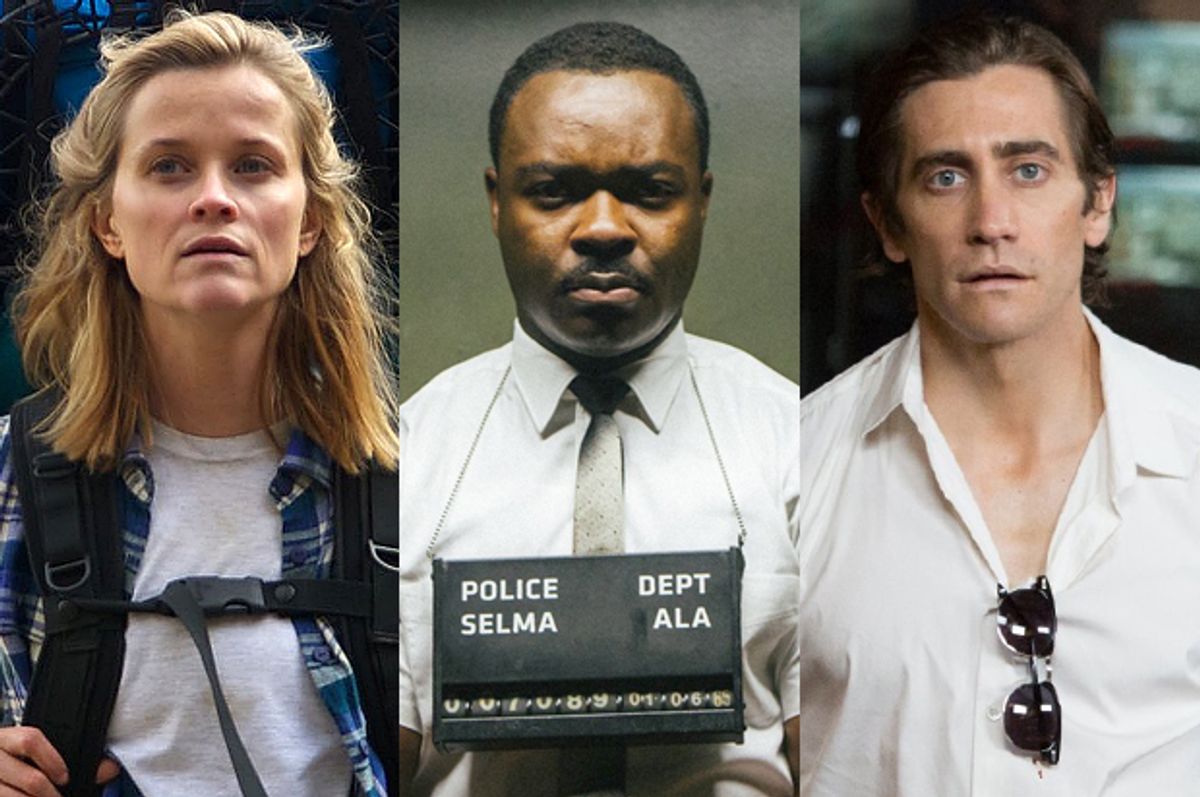 The 2015 Academy Awards air this Sunday, and all across the Web, Oscar prognosticators are placing their bets on who will triumph at the film industry's biggest night. (Voting ended yesterday at 5 p.m. Pacific Time.) Some of the races are pretty much locked up (best actress), some feel neck and neck (best actor, best picture) and others are still anybody’s guess (best adapted screenplay). Here’s a look at who’s leading the pack right now, and the underdogs and dark horses we hope might be able to unseat them.

Best Supporting Actress
Front-runner: Patricia Arquette, "Boyhood"
Upset we’d like to see: If Arquette somehow doesn’t take home the trophy (which seems very unlikely), we’d be pretty thrilled to see it go to beloved industry vet Laura Dern, who hasn’t been nominated since “Rambling Rose" 23 years ago. Dern shone in a small but beautifully drawn part as Cheryl Strayed’s mother in “Wild," and as we saw with her equally affecting performance in last years “Fault in Our Stars," Dern is capable of serious emotional heavy lifting with very little screentime.

Best Supporting Actor
Front-runner: J.K. Simmons, “Whiplash"
Upset we’d like to see: None, sorry! Simmons’ sadistic drumming instructor was by far this year’s best supporting performance, and his inevitable win here will be 100 percent deserved. Simmons is a longtime character actor and industry workhorse who has been plugging away in Hollywood for years; it will be nice to finally see his talent formally recognized.

Best Actress
Front-runner: Julianne Moore, “Still Alice"
Upset we’d like to see: Moore is pretty much a shoo-in for her remarkable performance as Alice, a professor with early-onset Alzheimer's (and with four nominations and no wins under her belt, it seems more than about time that one of our greatest working actresses should get her due). Yet if it has to go to someone else, might we suggest Reese? The actress gave one of her best and most mature performances to date in “Wild,” a film she co-produced and near single-handedly got off the ground. Much like Moore in "Still Alice," Witherspoon's Cheryl Strayed was an ambitious, physically demanding role, one that relied on her to carry the film pretty much on her own (not to mention that the film itself was much better received than “Still Alice").

Best Actor
Front-runner: Eddie Redmayne, “The Theory of Everything"
Upset we’d like to see: The best actor category is pretty much a two-man race between Redmayne and "Birdman" star Michael Keaton, and while Keaton came out strong initially, Redmayne’s recent SAG award victory seems to have moved the needle (the SAGs are generally a reliable predictor of Oscar success). While Redmayne gave the sort of grandiose, physically transformative performance the Oscars love to reward, we’d love to see this go to Michael Keaton, who engineered the ultimate career comeback in a much more interesting film.

Best Director
Front-runner: Richard Linklater, "Boyhood"
Upset we’d like to see: What we'd really like to see is a statue for Ava DuVernay for "Selma," but, well, she wasn’t nominated. (The Oscars kind of suck, remember?) If Linklater doesn’t take it home for his 12-year-long epic, Inárritu could triumph for his gorgeous, ambitious single-take masterwork in “Birdman."

Best Original Screenplay
Front-runner: Wes Anderson, “The Grand Budapest Hotel"
Upset we’d like to see: “Nightcrawler” is probably too ambitious and unusual for the Oscars, but it has a strong critical consensus behind it, and this is one of the few categories where the underdog might be able to force an upset.

Best Adapted Screenplay
Frontrunner: Graham Moore, “The Imitation Game"
Upset we’d like to see: “Whiplash” got unjustly shafted out of the best original screenplay category, where it rightly belonged, but we hope the Little Sundance Picture That Could is still able to go all the way. Written by 30-year-old newbie Damien Chazelle (who also directed the film), the low-budget film is a triumphant labor of love by Chazelle, and "best adapted" might be its best chance to capitalize on the serious momentum it has built over recent months.

Best Picture
Front-runners: “Birdman” and “Boyhood”
Upset we’d like to see: The two B's are pretty much neck and neck at this point, having each taken home a handful of awards apiece — although “Birdman” did get the SAG, a strong Oscar indicator. That said, it would be a thrill to see Ava DuVernay’s adored MLK movie “Selma,” which got snubbed in the directing and acting categories, get some well-deserved recognition.