The governor and his Fox pal trash “Ivy Leaguers” Clinton and Obama, while Walker guts the public university system 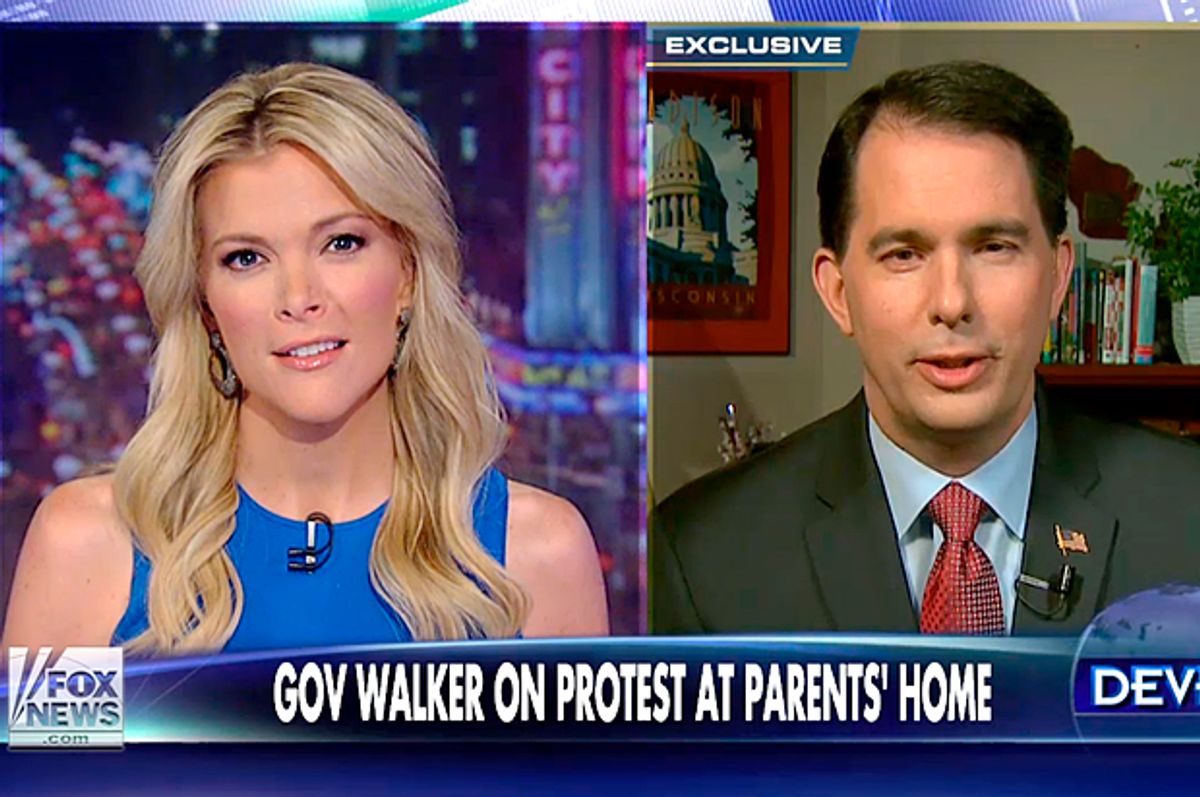 Fox News host Megyn Kelly thinks she has the solution for one of Gov. Scott Walker’s two college problems – the fact that he left Marquette University mysteriously, in his senior year, without a degree. On her show last night, Kelly threw Walker a big fat softball.

"You know," Kelly told Walker after he mentioned Hillary Clinton, "she went to Yale."

Kelly laughed, "As I say about my own Syracuse undergrad and Albany law school education, you know, we can see items clearly because we don't have all that ivy in our eyes."

And Walker went on:

"I think there's a lot of Americans who have looked at some of the leaders we've had over the last few years who've come out of those Ivy League schools and said, 'Maybe it's time we got people who are in touch with people all across the rest of the America."

So this is Walker’s plan, with the his friends at Fox: whack back at “elitists” and pointy-headed intellectuals, like Gov. Howard Dean, who raised the issue of his missing college degree in the context of Walker “punting” on a question about evolution. Like all Fox populism, it’s just faux-populism in the service of plutocracy.

With all due respect to Dean, I thought his comments were tin-eared. "Scott Walker, were he to become president, would be the first president in many generations who did not have a college degree,” he said on MSNBC’s “Morning Joe.” Dean went on: "So the issue here is not just the issue of dancing around the question of evolution for political reasons, the issue is, how well educated is this guy?"

But when fewer than a third of Americans hold a bachelor’s degree, that can’t be a prerequisite for the presidency. The legitimate reason that Walker’s college career is still an issue is that many questions about his exit from Marquette remain unanswered. Giving him an excuse to dodge those questions by crying “elitism” is just, well, dumb.

To be honest, I share a little of Kelly’s resentment that Ivy League gets translated into “better” or even smart. (The great Dahlia Lithwick does a good job of explaining why having nine Ivy League Supreme Court justices should bother us, here.) But I would challenge both Kelly and Walker’s claim to be among the huddled masses, since both attended expensive private universities, while I went to the University of Wisconsin-Madison, where I paid under $400 a semester.

Which leads to Walker’s other college problem, the one that Kelly can’t hope to solve: – his brutal $300 million cut to the University of Wisconsin system (complete with a failed attempt to shred the “Wisconsin Idea”). But that, too, represents his attempt to rile the GOP base, nationally, against snobby left-wing intellectuals.

But it may backfire in Wisconsin. Sure, the state’s far right has always crusaded against the cosmopolitanism of Madison, with regular proposals to limit the number of out of state students or hike their tuition dramatically (which is likely to be one result of Walker’s cuts.) But Walker’s budget doesn’t just aim at Madison – it hits all 14 state universities and the system’s two year colleges too.

“This is a budget that serves Scott Walker for president, and it doesn’t serve Wisconsin,” state Sen. Jon Erpenbach told the New York Times. “He’s trying to appeal to the most conservative of conservatives, the Republican voters in early-polling states. And there’s 5.5 million people back home saying, ‘Wait a minute.’ ”

So while Kelly is trying to present Walker as a man of the people fighting those nasty Ivy League Democrats, what he’s really doing is gutting the system of upward mobility that mainly serves working and middle class people in Wisconsin. The Kellys and Walkers can afford Syracuse and Marquette, but lots of people can’t.