If you’re not a good girl, I’m going to leave

I was 6 when my mother disappeared. Now, when men do the same, I assume I’m the one to blame 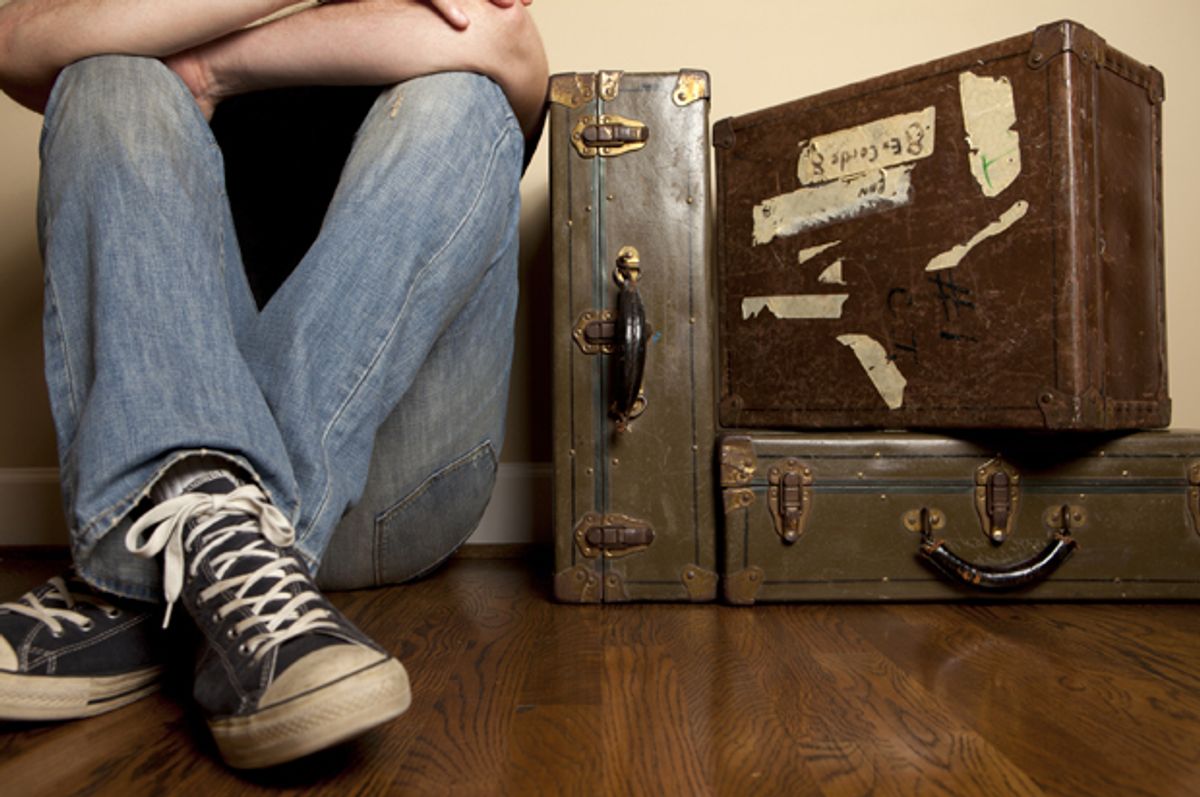 He left in the middle of the night. “I’ll call you later,” he said, and I turned over, pretending to sleep. I wanted to ask why, but I didn’t want to look needy. I figured it was something I’d done. The dirty secret of my love life is I always think that way.

The next morning, as I filled the morning coffee pot with water, I spotted another one of my dirty secrets just above the sink. A tiny roach, its black body wrapped around a piece of rice on the wall. Despite my efforts to keep my apartment perfectly spotless, the roaches were winning. At first, a couple collected around a crumb; now it seemed a large family had moved in. I spotted two mating in the crack between counter and appliance. I grabbed a steak knife and attempted to slice them in half, just as a serial killer in a horror flick always goes after the brazen lovers first.

Holding the knife, it clicked: Maybe the roaches were the reason Josh left. I’d heard him get up and tiptoe into the kitchen to drink some water. I imagined the squat ones lumbering across the floor like miniature hippos, the long, light brown ones rearing up like ponies. Maybe that’s why he stood at my bedside at 12:30, fully clothed, and bolted without an explanation.

I should have asked. Another woman might have thrown a fit, or demanded to know what was wrong. Not me. I’d grown accustomed to people leaving.

When I was 6, my mother and I lived in a three-bedroom house on the Big Island of Hawaii.  She was loving but volatile, which led to my parents’ separation. She often threatened: “If you’re not a good girl, I’m going to leave. Do you want that?” I shook my ponytailed head and tried my best to be the daughter she wanted me to be. But one evening, she tucked me in, and when I woke in the middle of the night, she was gone.

I ran through the house trying to find her. I assumed she had run to the store or snuck out to see a man, but she’d be back. I sat at the kitchen table, and as I waited, large, plumb roaches hurled their bodies against the louvered windows. Their crisp wings fluttered, their barbed legs scratched at the windowsill trying to get in.

My father claimed he came to rescue me the next day, but that’s not what I remember. I remember peeking out the front door in the morning, hoping to find my mother’s car, and her asleep in it. But no, just oil stains and tire tracks. I missed school because no one was there to take me. Too afraid to go outside, I made myself a baloney sandwich and slept on the couch. At night, too afraid to sleep, I took my post at the kitchen table again, listening for Mom’s blue Datsun, hearing only the arrhythmia of roach wings against the glass. If I’d only kept my room clean, if I hadn’t asked to go to my cousin’s house or needed to be picked up from school, if I hadn’t made so many demands, my mother might still have been there.

When my father finally arrived, I went to stay with him and his new girlfriend. I figured I’d be a hassle for them, too. At 26, my father spent most of his free time with his girlfriend. She made tired faces when she came home from Pay 'n Save to find me doing homework at the kitchen table. She was only 18. Why should she be stuck with me?

But I knew how to fix it. If I was no trouble, I wouldn’t wake up one morning to find them gone. So I learned to do things on my own, without being told—chores and homework—and I showed them I could take care of myself.

Family members talked about my mother but when I walked into the room, wanting to know more, they went quiet. I eavesdropped and heard words, like “police” and “prison.” When the first summer without my mother came to a close, my father told me I’d be staying with them for a while and going to a different school to start first grade in the fall. That’s when I knew: She wasn’t coming back. I ran to my room and, for the first time, cried, because I missed her, and because I believed, deep down, that her absence was my fault.

After that, I didn’t question my father further about my mother. It hurt too much to remember her and how I was somehow the reason she left. Instead, I pushed down all thoughts of her, and along with them, my own needs, happy to accept whatever crumbs of love came my way.

In the kitchen, I put the steak knife down. I hadn’t managed to kill the roaches. They moved deeper into the crevice, in plain sight but beyond reach. Surrounded by this filth, here was my real issue: My mother had left me, and I never forgave myself for it.

It was more than 25 years after she had departed, and I didn’t ask Josh why he left in the middle of the night because, obviously, I was to blame. To discuss it would only reveal my neediness and make me unattractive. Josh traveled a lot for work—to Las Vegas and New York. He’d be in L.A. for a week, then gone for several. When he was around, we had a great time, but he’d get lost in work and could easily go several days without texting or calling. I wanted to be closer, but never complained. I buried my needs, and I’d done it for so long that I was having trouble seeing them clearly.

When I considered my dating history, at least two other men had left me abruptly, in a similar fashion as my mother. Prior to Josh, I dated a man for three years, who ended things one night and vacated his own home until I could move out. Before that, I dated a man for five years. I came home from work one day—to the apartment we shared—and found all his belongings cleared out. I had let those men leave me, without demanding an explanation. Instead, I assumed it was me.

A month ago, around the time the roaches started becoming a nuisance, around the time I felt my relationship with Josh had run its course and I’d be left again, alone with roaches, I wanted to learn the facts about my mother—not filtered through my father’s half-truths because he wanted to protect me or perhaps because he felt his own guilt over what happened. So, I hired a private investigator, who provided me with her arrest record and rap sheet.

The night my mother left me she had gone to confront a man from her past. Things escalated and became violent. The details were gritty, and out of respect to my mother, who is still alive, I won’t go into the specifics, but she was eventually arrested and convicted of kidnapping and attempted murder. Reviewing the documents, it finally sunk in: Her reasons for leaving had nothing to do with me. My 6-year-old self could not have prevented her actions.

I was tired of accepting fault and trying to fix things on my own, battling roaches with a can of Raid, believing I could scrub down counters to get my life in order. All I got for the effort was an old ache. I wanted to rid myself of the roaches, along with the unreliable men in my life. I finally called an exterminator. He ended up being a round, jolly fellow, a Kris Kringle of pest control. He got to his knees to examine my cabinets.

“It’s good you called early.” He explained roaches make nests. “It’s not bad, but had you waited any longer, fumigation would have been the only way.”

I still had options. I watched the exterminator remove dishes from my cupboards and apply a clear, odorless pesticide to the corners of my kitchen cabinets. As he worked, I imagined him as a man I loved, letting him cook dinner and take care of me. I wanted to let go of the self-blame and steadfast independence that kept me alone and stuck in time. Here I was getting help for a problem, and it was such a comfort.

It took a couple of weeks, avoiding Josh’s calls as I thought of what I wanted for a change. I decided I couldn’t allow another person I loved to sneak off without considering my needs. I met him at a Hollywood coffee shop, “I need more from our relationship, to feel like I’m important to you or I can’t go on,” I said. Tears streamed down my face. I knew things would end, but I was overwrought for a different reason. It felt like I was saying goodbye, finally, to my mother. I had no way of preventing what she had done so many years ago, and I had to stop holding myself responsible.

I wish I could say it was easy to let go of the notion—I was not good enough for her to stay. My heart holds onto it because it was better than the alternative—she just didn’t want to stick around. But Josh helped me see it another way. He put his arm awkwardly around me and with my face buried in his chest, he told me intimacy had always been a problem for him, and I deserved better. Perhaps a version of this was true for my mother. She was incapable of taking care of me, but she wanted the best for me all along, and in leaving, she hoped I might one day find the kind of love she was incapable of giving. I’m still searching for it, but stating my needs and making myself vulnerable was a first step to saying goodbye to the leavers in my life.

Tammy Delatorre is a freelance writer in Los Angeles. When she’s not writing, she pursues interests in paddleboarding, photography, and culinary delights.