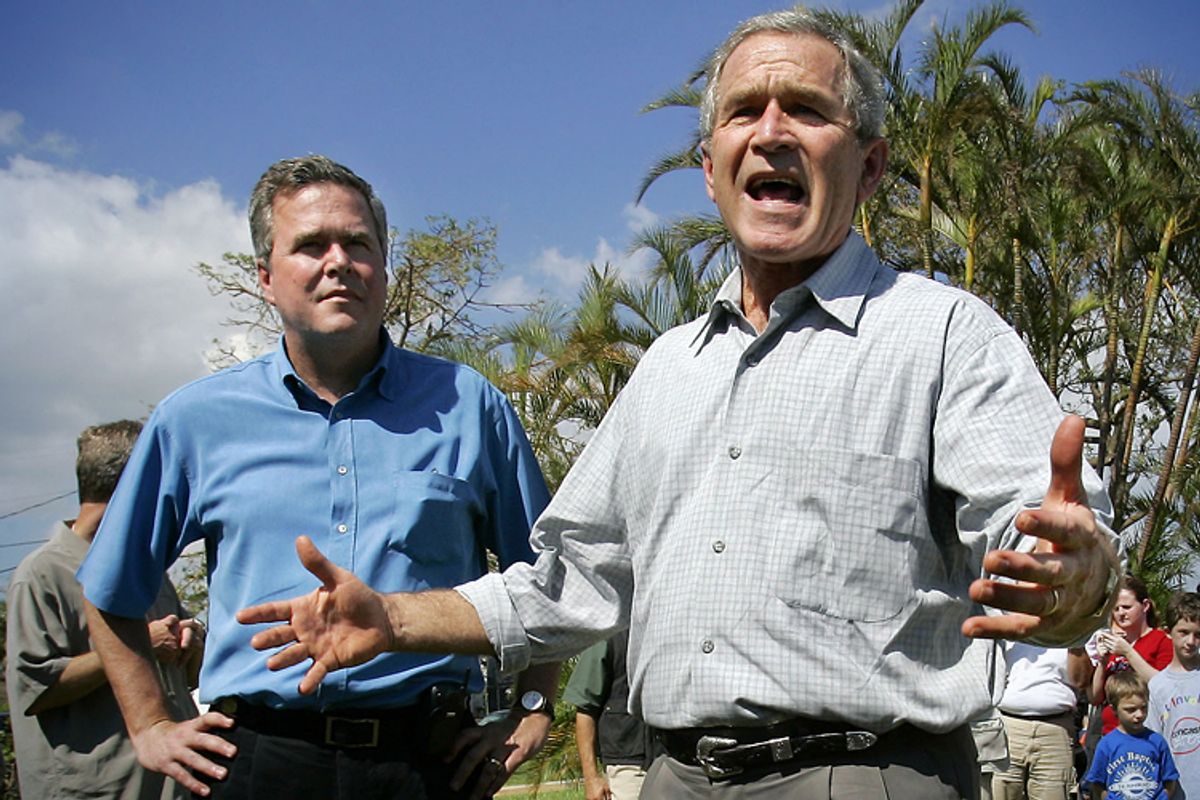 Jeb Bush is giving a big foreign policy speech this afternoon in which he’ll sketch out, in painfully vague terms, his vision for restoring American leadership, renewing American power, meeting the challenge of 21st century threats, and various other bits of GOP foreign policy boilerplate. The only mildly interesting portion of the excerpts released by his campaign is Jeb’s ham-fisted effort at distinguishing his as-yet undefined foreign policy from that of his disastrously incompetent brother.

I also have been lucky to have a father and a brother who both have shaped America’s foreign policy from the Oval Office.

I recognize that as a result, my views will often be held up in comparison to theirs’ – sometimes in contrast to theirs’.

I love my father and my brother. I admire their service to the nation and the difficult decisions they had to make.

But I am my own man – and my views are shaped by my own thinking and own experiences.

Got that? The Bush family, contrary to popular perception, is not a hivemind collective organism. Jeb Bush is distinct human entity from the people who share his surname, with his own brain that does its own thinking. Sure, he spent most of George W. Bush’s presidency enthusiastically cheering on the U.S. invasion and occupation of Iraq, but that’s just what a good brother would do. The Iraq war has so little to do with the thinking that his own brain does that Jeb doesn’t even see the need to talk about it.

The presidency, however, is a big job with responsibilities that far outstrip the cognitive capacities of a single brain, which is why presidents seek out people to do their thinking for them. And as Jeb moves to distinguish his foreign policy from that of his brother and father, he’s reaching out to a broad spectrum of advisers – pretty much all of whom worked for his brother and/or his father. There’s one name on that list that shines like a beacon of Bush-style foreign policy incompetence: Paul Wolfowitz.

It’s a point of national shame that the people who conceived, sold, and mismanaged George W. Bush’s Iraq misadventure are still sought out by politicians and the media for their views on foreign policy. Among that crowd of charlatans, Wolfowitz stands out both for how consistently wrong he was about Iraq, and his utter lack of repentance for any of consequences of his failures. To this day he insists that invading Iraq in 2003 was the smart thing to do because we probably would have had to do it anyway at some later point, but with “higher costs.” As a reward for helping to turn Iraq into a bloody nightmare of sectarian chaos, Bush nominated Wolfowitz to be president of the World Bank. Upon assuming the role, Wolfowitz quickly immersed himself in ethics scandals and was forced to resign under a cloud of international condemnation. Wolfowitz was last seen agitating for Ahmed Chalabi – the discredited Iraqi politician who fed the Bush administration garbage information about Saddam Hussein’s WMDs – to be elected prime minister of Iraq.

The man is a walking, talking foreign policy disaster whose career in public service was a string of failures and embarrassments. But failing up is a proud DC tradition, and Jeb Bush is perpetuating that tradition by making Wolfowitz one of his foreign policy advisers. We’re not supposed to be concerned, though, that Jeb is seeking counsel from one of the least credible neoconservatives to emerge from his brother’s national security team. He is, after all, his own man.