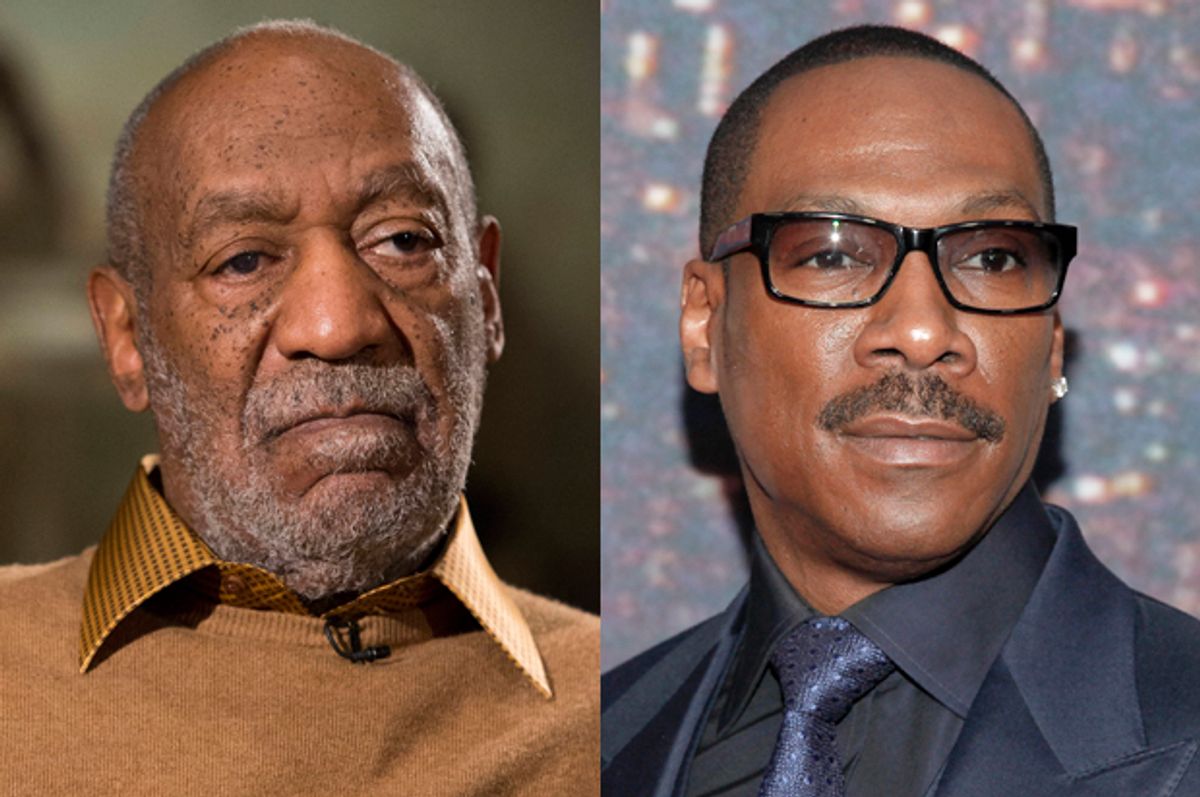 Eddie Murphy, apparently, does not need laughs these days, which might explain a good deal about his long-awaited return to “Saturday Night Live” for the show’s 40th anniversary special last week. Murphy, who gave a brief monologue commemorating "SNL" without performing in any sketches, reportedly shut down an opportunity to join a "Celebrity Jeopardy" segment in which he'd been asked to portray Bill Cosby -- but not without considering how he might justify impersonating a formerly beloved alleged rapist first.

Norm Macdonald, another former "SNL" star who joined in writing the 40th anniversary special, offered up a behind-the-scenes look at the process on Twitter Wednesday night, which included his account of trying to convince Murphy to portray Cosby:

The iconic doors would open and on to home base would step Eddie Murphy. The audience would know what to do.

When he speaks, he is Cosby. Eddie Murphy doing a perfect Cosby impression. The audience does not let him finish. The sketch ends.

Clearly, Murphy wasn’t willing to go along with the gag. But his reported search for a justification to impersonate Cosby “pre-allegation” shows just how much trouble we continue to have making sense of the sexual assault accusations against the former “Cosby Show” star. “SNL” made a joke of portraying Cosby “six months earlier,” before comedian Hannibal Buress drew attention to the rape allegations in October, which encouraged dozens of previously silent victims to go public with their stories. But Buress merely reignited public interest in a story — many stories — that had been floating around for years. Cosby hasn’t been “pre-allegation” since at least 2005, when Andrea Constand and 13 other women filed a lawsuit against him alleging sexual assault; that same year, Tamara Green accused Cosby of raping her in the 1970s on "Today."

In reality, though, Cosby hasn’t been “pre-allegation” for much longer than that. As Buress’ infamous joke noted, rumors of the comedian’s predatory behavior have floated around the entertainment industry for years. “30 Rock” slyly noted the open secret nature of Cosby’s alleged assaults in 2009. In a recent interview with Marc Maron, Judd Apatow explained more directly how the allegations informed the industry’s internal perception of Cosby even during the height of his career:

At “The Bill Cosby Show,” everybody knows this guy is up to no good — they may not know he’s raping people, but he’s certainly doing terrible things with women and casting couches and cheating on his wife. Everyone at that show knows what’s happening. … It was not a secret in our industry. But when it goes into this kind of criminal activity, and all those people remain silent or say, “That’s not the Bill Cosby I knew” — well, I’m sure the Bill Cosby you knew was also awful in a different way. He wasn’t a great guy. Everybody knows. I have a relative who was working on a TV show and Bill Cosby was a guest star, and before he arrived everyone was like, “She needs to stay away from Cosby — make sure he doesn’t see her.” His reputation preceded him for decades and decades.

As audiences have struggled to label Cosby a rapist, or even a “bad man,” we’ve also continued to seek these divisions that allow us to protect our memories of the star. We separate the comedy from the man, try to leave untarnished one part of his legacy — the part that paved the way for countless actors and comedians of color — by detaching it from what Cosby’s legacy really is. Trying to view Cosby “pre-allegation” is just one more effort to divorce what we know now from what we thought we knew then.

But the Cosby we knew — the one who was instrumental in changing Hollywood and in so many individual lives — is the same Cosby who was allegedly raping women while he made history. We know that now, but there were plenty of people who knew it years ago, too. There is no line and there are no two sides to the star. What we knew and when we knew it does not change the fact that dozens and dozens of women have said Cosby drugged and assaulted them during the years he was doing stand-up, starring on the “Cosby Show” and breaking barriers that needed to be broken.

Nothing can restore Cosby’s legacy now that we know what we know — not Murphy’s refusal to “kick a man while he’s down” by impersonating him on “SNL,” not clutching pearls when comedians satirize his behavior, nothing. And maybe it’s better that we don’t try to justify remembering Cosby at a time when he was “pre-allegation” — because it doesn’t take us back to a time when the star wasn’t preying on women. It only takes us back to a time when we didn’t know.