The Obama administration is playing politics with John Roberts, and it's about time 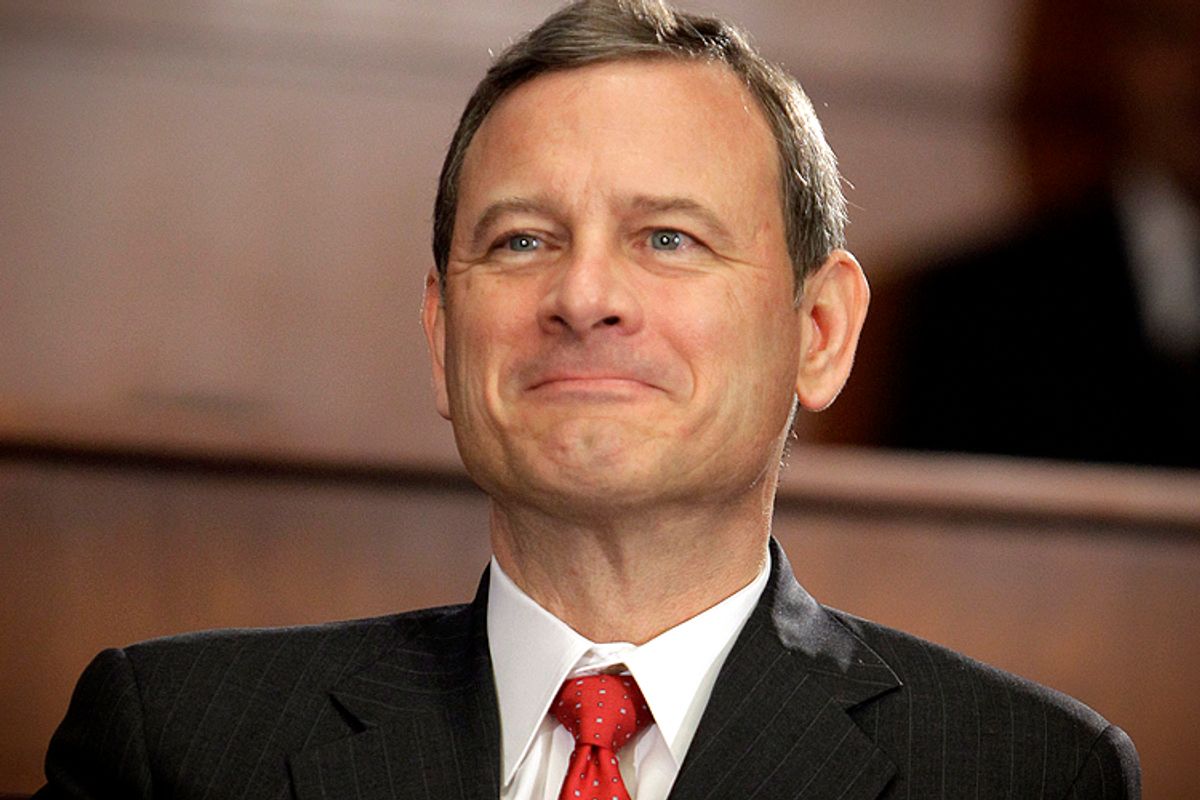 The Obama administration is taking a cynical approach to the Supreme Court's consideration of King v. Burwell, conservatives' latest desperate and quite possibly successful attempt to gut the Affordable Care Act. It is appealing to John Roberts' political thinking, highlighting the tremendous damage it would do to what remains of the Court's reputation and the chaos it would wreak on the healthcare system.

Thank God that they finally, finally understand the necessity of this approach. It is the only way to deal with such a political Supreme Court.

If conservative justices could be expected to "call balls and strikes," as it were, this case would be an easy one for the Supreme Court to decide -- so easy, in fact, that they would have already decided it. They would have decided that it was obviously not worth taking up. That they granted cert to the case in the first place tells you that defending the case on its legal merits, alone, will not be enough. You have to get into John Roberts' head and tilt the political balance of his thoughts.

TPM's Sahil Kapur reports today on the administration's strategy to persuade John Roberts, political operator, that the politics of gutting the Affordable Care Act would be a net-negative for his legacy:

The law's defenders in King v. Burwell are preoccupied with courting the chief justice, whom they view as their most "winnable" swing vote, according to sources close to the case. In 2012 he broke with conservatives and saved the Affordable Care Act from the politically-charged legal attack that nearly killed it.

"As a matter of legal doctrine it's not a difficult case. What's making it difficult is the politics of the ACA. And the chief justice has already shown that he's able to rise above politics," said Yale law professor Abbe Gluck, who filed a brief in support of the ACA subsidies at stake.

The law's defenders want the Court to believe that its legitimacy would suffer if it guts a sitting president's signature initiative in a case they claim is a partisan hit job. They also want to stress that the real world consequences would be devastating for millions, and that Congress has no viable plan to prevent the chaos in the health care system.

On the one hand, John Roberts would love to kill Obamacare. It would resuscitate his reputation on the right -- including the four conservative justices whom he serves alongside -- following his treasonous upholding of the individual mandate in 2012. He would be the guy who threw Obamacare into a death spiral. Aces! On the other hand, it would be a joke of a decision and screw over millions and millions of people. But he could get rid of Obamacare! Though there's not a good legal argument for that. But... no Obamacare? Tough call.

It was clear that the administration had adopted a political strategy a couple of weeks ago, when HHS Secretary Sylvia Mathews Burwell remained tight-lipped about the administration's "contingency" plans in Senate testimony. This infuriated Republicans, who want to signal to Roberts that everything will be okay if he goes ahead and rules for the plaintiffs. (It should be noted that the plaintiffs don't have any idea what the hell they've been dragged into.)

This is an welcome indicator of the Obama administration's maturation process. Too often in the past, when it's come to Obamacare, they've been too naive to recognize their opponents' hackishness, thinking that they were dealing with fair-minded adults who could be persuaded by the reasonability of their arguments.

The administration never believed that a serious legal challenge against the constitutionality of the individual mandate could be mounted. Why, this was a conservative idea to begin with, and it's clearly covered by the Commerce Clause according to conservative justices' own history of opinions, the thinking went. There is no way that they would demonstrate logical inconsistency just for the purpose of striking down a law they don't like!

This was the opinion of serious legal experts both within and outside the administration. It's hilarious to remember now, reader, but there was a time when people argued that Justice Scalia would vote to uphold the individual mandate given his previous interpretations of the Commerce Clause. This was before everyone fully realized that, despite what intellectual dexterity he may have shown at one point in his career, Scalia had since become the judicial equivalent of the guy who walks into Chipotle with an assault rifle and wonders what all the fuss is about. Neither Scalia nor any of his four fellow conservative justices found the individual mandate protected by the Commerce Clause -- John Roberts voted to uphold the mandate, but only on taxation grounds, as a way to irritate the White House while preserving the Court's sheen of respectability.

But Roberts also, crucially, voted to make the Medicaid expansion optional. The White House's response to this, too, was naive, saying that "as a practical matter it is not particularly significant." Once again, the administration made the mistake of underestimating conservatives' hostility to the law. There was no way, they argued, that even the reddest of red states would turn down a deal so sweet as the Medicaid expansion. The feds would foot 100% of the bill for years; in the long term, it would still cover 90%. Besides, the business community and hospital associations would apply the necessary political pressure to get red states to accept it. Several years later, though, here we are, and nearly two-dozen states still have yet to expand Medicaid. Even in red states where Republican governors have recently warmed to the expansion, though, they're having a mighty hard time persuading their Republican legislatures to go along with them.

The White House finally understands that the merits of a legal argument or a good deal are not enough, on their own, to persuade Obamacare's opponents. You have to work the politics, too. There are hacks. Look around.