"50 Shades" of Confederate grey: Why the Christian right is losing power over Southern morality

Evangelical authorities are calling for a boycott of the film, but Southern moviegoers haven't gotten the message 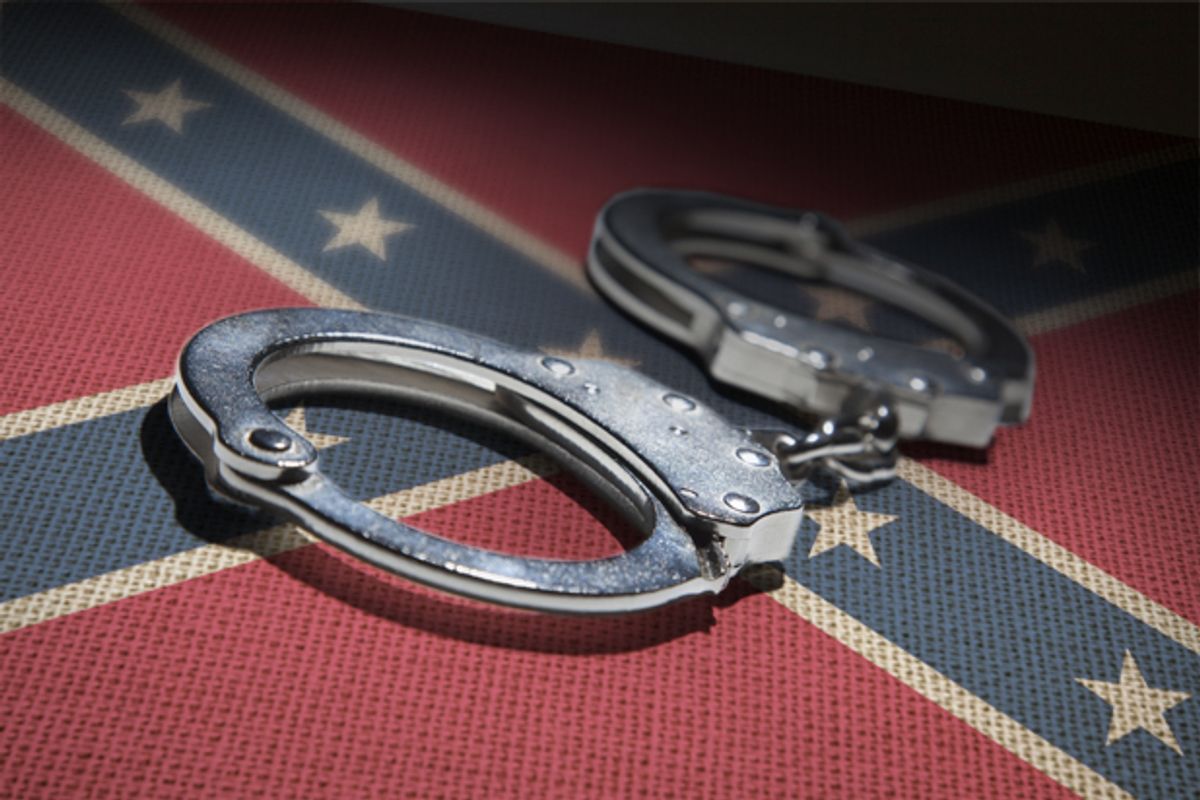 One writer at the Christian Post, for example, warns readers that "the plague of pornography is an epidemic in our culture, and this movie will make things far worse." The same writer later insists that "porn damages the brain." Focus on the Family, in its review, observed that “any love story without God gets twisted into a broken, heartbreaking jumble.” But even that negative review wasn't enough to save Focus on the Family from the rebuke of other Christian organizations, who consider it sinful even to review the film at all. "The Scriptures warn us to 'flee from sexual immorality,' not run toward it in the name of evangelism," wrote the Christian website Gospel Spam. "Even the lost knows that this material is trashy, why is it that a supposed mature Christian ministry hasn't quite figured it out?"

But even in spite of this avalanche of condemnations, a funny thing happened last weekend: "50 Shades of Grey" grossed a monstrous $93 million at the box office — eclipsing "The Passion of the Christ," of all movies, as the highest-grossing February opening of all time.

Not even Christian moviegoers seemed to be paying much attention to evangelical pundits. "50 Shades" is a smash hit in the heavily Republican, mega-churchgoing Southern states of the union. Mississippi and Arkansas, certainly two of the most conservative and religious states in the country, ranked first and second in pre-opening ticket purchases. At first glance, this may seem surprising, but there is a reason for it, one that goes well beyond the vapid observation that “sex sells.”

Traditional morality, which maintained that sex was only moral if it served the higher purposes of procreation (thus condemning homosexuality and abortion) and social stability (thus condemning divorce and female promiscuity), is crumbling throughout the Western world. Cultural conservatives are quick to see this process as evidence of an overall moral decline. But that is not what is occurring. Rather, the old morality of higher purposes is being replaced by a new morality, centered on human self-fulfillment. According to this rapidly advancing worldview, the purpose of sex is pleasure, and fulfilling sex is an important element of most people’s general life experience.

Self-fulfillment is a real moral system. It has as many prohibitions as the morality it is replacing, but they are different prohibitions. This system maintains that any sort of sexual relationship between (or among) adults is acceptable, but the relationship must be entirely consensual. According to the old morality, a man could force his wife to have sex with him against her will, the so-called marital privilege; according to the new morality, this is marital rape, and absolutely prohibited. Similarly, the old morality permitted a grown man to have sex with a child if he married her. An extant letter from Pope Alexander III declares that  a man has not sinned by having sex with his ten-or eleven-year-old fiancée as long as he marries her once she turns twelve,the traditional age of consent. The new morality absolutely forbids such a relationship because the child is likely to be traumatized by such a relationship.

"Fifty Shades of Grey" is popular because it shows the protagonists dispensing with the old morality, which most people are happy to be rid of at this point. But it is particularly popular in the South because it also enables people to think -- and talk -- about the new morality, which has thus far made somewhat slower progress in this region than in most other places in the Western world. Of course the movie is about sex, but it is also about consent. The male character, ironically named Christian, is rich and famous. This not only provides him with cachet, and enables him to collect a “playroom” full of sex toys, but it also means that he could lose his social standing, and a lot of money, in a civil suit for sexual abuse. If he wants to engage in BDSM sex, he must obtain Ana’s consent. Of course, "50 Shades'" depiction of consent is imperfect, as critics have been quick to point out. What's important for our purposes here, and what distinguishes this type of sex from other types, is that once Ana agrees, she is restrained, and subject to painful experiences that it may be difficult for her to avoid. Is this moral because she agreed in advance? Or, where something like BDSM is concerned, is that not actually enough?

Thus, the movie gives people, and specifically Southerners, the opportunity to talk about the contours of the new morality with friends and colleagues. It is a bit awkward to start a conversation about the limits of consensual sex when you’re having dinner with your friends or waiting to use the company copying machine. But you can ask whether the other person has seen "50 Shades of Grey" and proceed from there.

In other words, this is a moral movie, despite all of its flaws, not because the characters are necessarily in the right, but for the same reason that "King Lear" is a moral play. It gives the audience a chance to think about their own ideas of right and wrong. That is why writers attached to the old morality (who typically identify themselves as Christians) have been urging their readers not to see the movie.  It’s not only that the movie depicts sex, but because it invites its viewers to think about, and become familiar with, the rapidly advancing morality of self-fulfillment.

Edward L. Rubin is a professor at Vanderbilt University Law School. He is the author of "Soul, Self, and Society: The New Morality and the Modern State," published by Oxford University Press.