"As long as humans are around, there will be d*ck jokes": Adam Scott on the enduring appeal of "Hot Tub Time Machine 2" 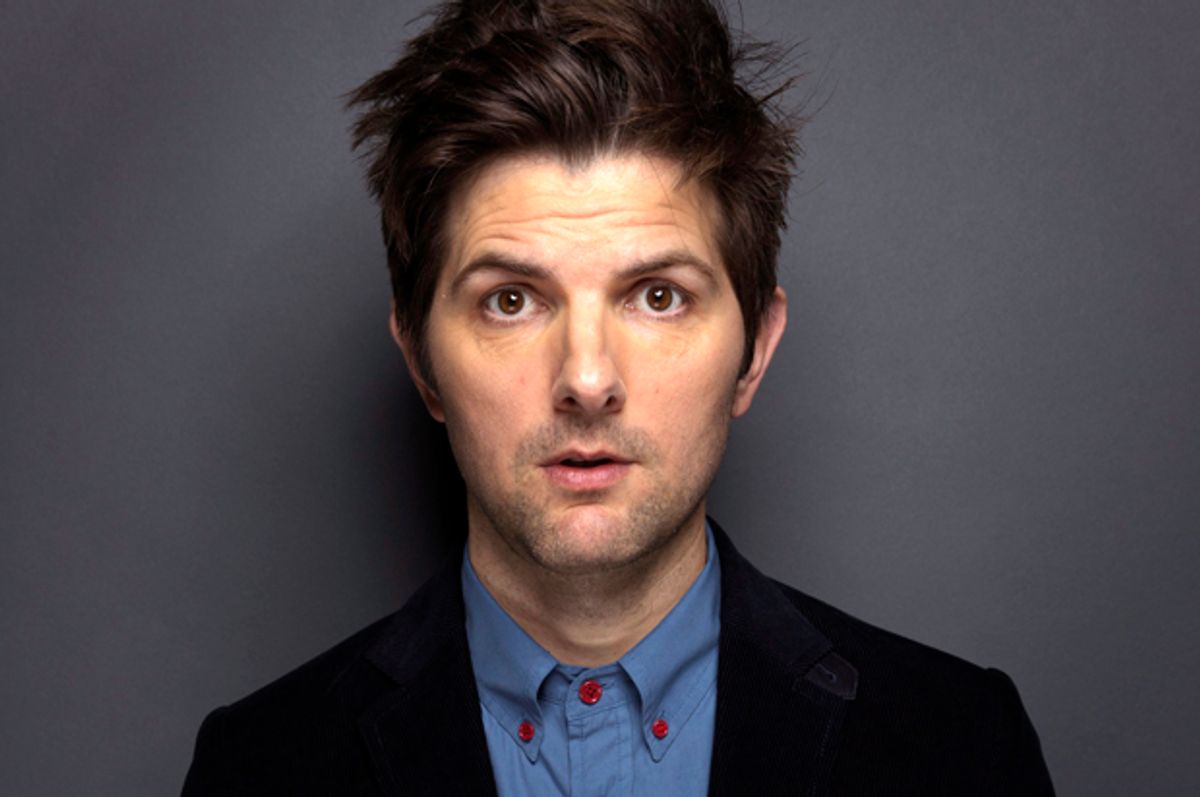 Adam Scott suffered through many genres before finally landing in his sweet spot: slow burn humor. Starting in low budget horror, Scott climbed the ladder, appearing in indies, action (“Torque”) and prestige pictures (“The Aviator”). It wasn’t until 2008’s “Stepbrothers,” playing Will Ferrell’s successful and comfortable asshole younger brother that things began to take off. Scott followed up the small but crucial “Stepbrothers” role with Starz’s cult hit “Party Down,” playing a failed actor with such hilarious conviction you feel the sting of his predicament. Then came “Parks and Recreation’s” wisecracking Ben Wyatt, somehow the perfect ying to Leslie Knope’s hyperactive yang. The series comes to an end next week, but don’t expect any spoilers from Scott in this interview.

The versatile everyman has now taken on the “Hot Tub Time Machine” franchise, playing another straight arrow (the son of John Cusack from the first film) who cuts loose maniacally the night before his wedding, prodded by friends and co-stars Rob Corddry, Craig Robinson and Clark Duke. Despite his genre-hopping, Scott eternally seems like a good friend from college, the one you’re always happy to call, not text.

Were you a fan of the first film?

I loved the first one. I went to the premiere because I know all those guys, and am friends of Rob (Corddry), Clark (Duke) and Craig (Robinson). There’s also (Director) Steve Pink and Lizzy Caplan who’s in the first one. I loved it and was excited to jump into this one.

How long had the sequel been germinating?

How collaborative was the process? I imagine there was a lot of improv.

It was very collaborative and a lot of improvisation on set. Josh Heald is a really funny writer, so he was on set at all times coming up with new jokes, and we all improvised a lot. It was like going to summer camp with your friends.

You’re kind of the Long Duk Dong of the film, a straight arrow who cuts loose and ends up in a tree at the end.

Was the set pretty wild?

We’re there 15 hours a day. It’s definitely work. It wasn’t like a 24 hour party. We had to get up early and work all day. It was like a regular movie, but we certainly wanted it to be fun to watch and it was really fun to make. It was like any other movie. It was hard work.

I’ve always imagined working with friends would be easier.

It makes it a lot more fun, but it’s still exhausting at times — but beats real work, that’s for sure.

The future in “Hot Tub Time Machine 2” reminded me of “Idiocracy,” where the technology is advanced but the people have regressed. Did that occur to you at all in shooting?

Yeah, for sure. I think the idea that reality television just keeps going and getting more and more stupid is kind of the idea Josh had in mind when he was writing it.

What brand of comedy do you prefer? You’ve become a master of the slow burn, but do you enjoy slapstick and broad, raunchy humor?

My favorite guys were always Albert Brooks, Steve Martin and David Letterman. That’s my trifecta of comedy heroes. I was certainly brought up from there, but Bill Murray and Dan Aykroyd — those are the guys I kind of grew up with and just love to this day. I’ve seen “The Jerk” and “Defending Your Life” dozens of times and still enjoy watching them, but also Eddie Murphy’s stuff in the ‘80s, so I like a broad range of comedy. I think as long as it’s funny, it’s great. I’m not a snob at all. If it’s funny, it’s funny.

This is something I have to admit: I walked out of the first “Hot Tub Time Machine,” in a theater, on a date. It just wasn’t working for me. I’m not particularly a fan of dick jokes. I have no problem with it. It’s not like I’m a prude or it’s a P.C. thing. I just don’t find them funny.

You don’t think dick jokes are funny? Drew…this is not the movie for you. What are you doing with this movie?

I went in with a very open mind, and I had more fun this time around, I have to admit that. However, you take dick jokes pretty far in the sequel. Were you ever uncomfortable?

I’m a fan of the unsuspecting victim getting nailed in the crotch. That’s my brand of dick joke.

Sure. I love those, too.

The ending leaves room open for an epic “Hot Tub” trilogy. Would you be on board for that?

I guess so. I don’t know if they have plans for that or what they’re thinking, but yeah, I’m open to anything.

Was comedy always your driving muse? For instance, I was shocked to see you in “Hellraiser: Bloodline,” but you brought a subtle comedic element to that role.

“Stepbrothers” was really the first comedy I really did, so in the past several years it’s definitely been the driving force. I’ve focused on that and love it. It’s really fun.

Were you always the funny kid or the quiet kid?

I grew up and was really into “Monty Python,” and, like I mentioned, Steve Martin and Albert Brooks, but I don’t think that was a particularly unique thing. A lot of kids were into sports and I was into “Back to the Future” and “Dirty Rotten Scoundrels.” Comedies were definitely important to me growing up.

“Parks and Rec” seems like one hell of a show to bid farewell, with so many funny people and unique chemistry.

It wasn’t really tense. It was sad because we’re all friends and don’t get to see each other every day anymore. We’re all gonna get together and watch the finale and we’re all still in touch. We all miss doing the show, even though it’s only been a couple months. We all miss it and miss each other, but at the same time, we’re all happy that we got to finish on our own terms and the show was still great. I can’t wait for everyone to see the finale. It’s really terrific.

What were your thoughts when you read the final script?

It’s great. Michael Schur, the creator of the show and Amy (Poehler) wrote it. It’s really funny and touching, and I think it’s a great finale. Finales are really tough to write, because you can go so many ways with it.

That’s true. I remember watching a special on “The Wonder Years” and Alley Mills absolutely hated the finale, while I loved it.

Yeah, that’s interesting. Michael and Amy did an amazing job, and I think people are going to love it.

Did you tear up at all? Is it that kind of a finale?

I’ll leave that to the people watching it. I found it moving but everybody will have their own reaction. I think more than anything it’s really funny, which is what the show is, and I was really taken aback by how funny it was.

Who is the funniest person you know?

Honestly, my kids are the funniest people I know. They’re hilarious.

How old are they?

Those are great ages for kid comedy.

Amy Poehler, Will Ferrell, Ken Marino. I could keep listing people, but is there one moment that sticks out in your mind where they broke you up so much that you couldn’t recover and save the scene?

There was a moment in “Parks” where Amy had to tell a couple people in our office to get out, and she lowered her voice to such a level where it sounded like she was going to strangle them to death. For some reason, moving her voice into this deep register and telling them to "Get the hell out of the office." I could not keep it together and couldn’t make it through the scene. It was really funny. In the scene that’s on the show, you can see me breaking. They couldn’t find a take where I didn’t break.