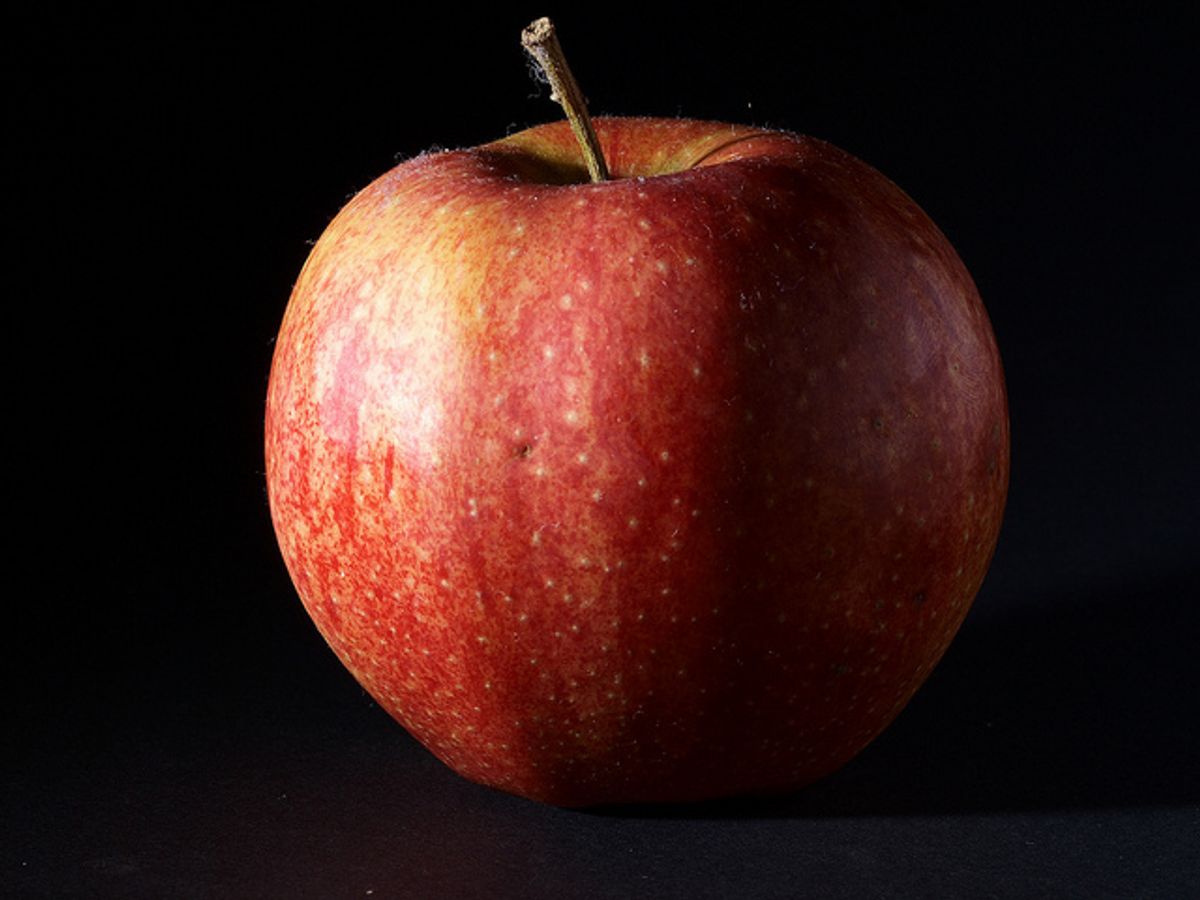 This week Salon readers reacted with some bemusement to the announcement that the USDA had approved for planting a genetically engineered apple that does not turn brown. The Arctic(tm) Apple has the genes that cause browning suppressed, or "silenced", and may hit shelves as early as 2016. Many readers wanted to know, simply, why? "If I cut an organic (of course!) apple and want to serve it later, I squeeze lemon juice on it... how unnecessary is this?" asked Artemis Rose, summing up much general sentiment. Velocitor wondered if Arctic Apples would be be labelled as a GMO. "I mean, according to the press releases, they're better than natural apples, and consumers should be lining up to buy them, so no sense hiding their GMO status, right?" Probably not, but least one major grower has already rushed to label its apples as Non-GMO.

Neal Carter, the president of Okanagan Specialty Fruits Inc., the apple's developer, offered some counter suggestions in a question and answer session on Reddit this week. When asked by a sympathetic participant how he would counter opposition to the Arctic Apple from "the very vocal anti-biotech crowd", Carter responded, "There are a lot of really cool things you can do with Arctic apples that normal apples aren't capable of. Yesterday we used cookie cutters to make some apple fish, stick those in some blue jello! The anti-GMO crowd doesn't understand the opportunities available here."

This may have been a flippant response, but Carter has serious intentions. The Arctic Apple is in the tradition of the very first approved GM crop, 1994's Flavr Savr tomato, which was modified to both ripen and rot more slowly. The bioengineering industry likes to talk about potentially life-saving GMOs such as Golden Rice, but the products like the Arctic Apple appear to have been developed solely for the purpose of looking better on supermarket shelves. And yet, supermarkets throw away enormous amounts of food, as much as $15 billion of fruit and vegetables each year in the US. The enormous logistical struggle required to transport fresh produce from farm to supermarkets is not only expensive and environmentally damaging but produces yet more waste. Even after all this effort, large parts of our population do not have easy access to fresh food. In this context, the Arctic Apple may be a logical response to a real need, albeit one that created in part by consumer demand for perfect, unblemished fruit.

Okanagan Specialty Fruit is a tiny Canadian company with only seven employees, and they are also working to block fire blight and apple scab, two major diseases that help put apples at the top of the Environmental Working Group's "Dirty Dozen" of fruits and vegetables that are sold with pesticide residues. Genetic modification has proven successful in solving such problems, with the Rainbow and SunUp papayas widely credited for saving Hawaii's papaya industry from the papaya ringspot virus after conventional control methods failed.

None of this is intended to downplay the questions and problems with genetic modification but to suggest that countering their continuing appeal involves finding other solutions to the problems they propose to solve. The Flavr Savr tomato was eventually driven off the market by improved methods of transporting tomatoes (basically, it's much easier to pick and ship tomatoes when they are still unripe.)

As we continue to experiment further with genetically modified foods, what are your reservations? What do you think are the smart responses to the world's food problems? Do you think there are solutions to the problems that GM crops claim to solve that are being overlooked? Are there some problems that can be best solved by genetic modification? Take our poll and let us know your thoughts in the comments!