What color am I, mommy?

One thing I've learned as a Jewish mother raising black sons in America: Whiteness is a dangerous construct 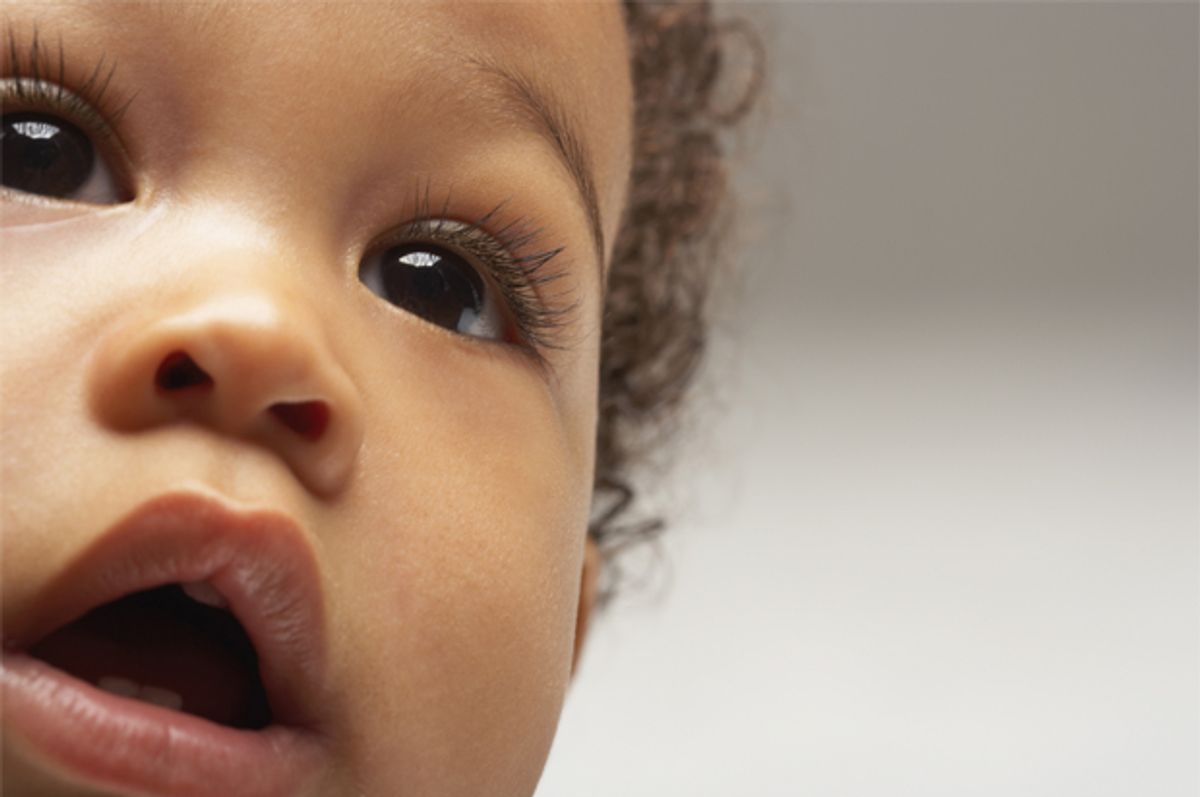 For Adam and Khary

It was 1969 and 1973, both times in early fall, when I first saw your small bodies, rose and tan, and fell in love for the second and third time with a black body, as it is named, for my first love was for your father. Always a word lover, I loved his words, trustworthy, often not expansive, sometimes even sparse, but always reliable and clear. How I -- a first-generation Russian-Jewish girl -- loved clarity! Reliable words -- true words, measured words, filled with fascinating new life stories, drawing me down and in. The second and third times I fell in love with black bodies I became a black body, not Black, but black in a way I’d say without shame and some humor, for mine is dark tan called white. But I am the carrier, I am the body who carried them, released on a river of blood.

Am I black in a cop’s hands when he is pushing, pressing hard for dope or a gun or a rope or a knife or a fist?  I am not a black body, yet my body is somehow, somewhere, theirs -- Trayvon’s, Emmett’s, thousands more at the end of a rope’s tight murderous swing, black as a night stick splits my head, shatters my chest, black as a boy not yet a man walking toward a man with a gun, suddenly shot dead, a just-become man walking down the stairs toward a gun, black as a tall man, a big man, looking strong but pleading for his breath, killed by choking arms and bodies piled on top of his head.

Walking the sidewalks of my city in the morning, I dodge white dads’ bikes daily, their little toddlers strapped into a back seat, and I don’t mind as riding in the street or wide, traffic-filled avenues does seem a dangerous way to get to nursery school. Later in the morning, when I am still walking, the white fathers or mothers bike by me again, now with the back seats empty. I look around for police, wondering if there will be a ticketing for riding on the sidewalk, since no child’s safety is at stake.  No cops in sight. My great-nephew, young and black and not fully grown, was stopped and handcuffed by police a month ago for riding his bike on the sidewalk,  his often glazed eyes glazing more deeply now.

Once I wrote a story -- a black man named Samuel, enslaved in Maryland’s western shore, 1863 -- I drew him in words.  His death was terrible and vicious, his body dismembered by the man who called him property, the crime -- impregnating the man’s daughter --  a woman I called Louisa. I named her in part for a strong friend I wanted to conjure by my side as I wrote, but she was based on a real-life young woman who lived in actual history, a woman named Jane, the same name as my own.

Samuel’s death was so brutal I had trouble reading my own words out loud, or even to myself at times, though I had written them: a slow dismemberment, piece by precious human piece, this nearly unspeakable violence also taken from reality, a horrific reality I had read about in books on torture during slavery, an image that refused to leave my mind, especially in the dark or when I closed my eyes.

I watched him die with Louisa, and with Ruth, Samuel’s mother, a character based in part on my mother-in-law, granddaughter of an enslaved American, and my close friend for more than 40 years now, and I tried not to hide my eyes from the brutal human dismemberment -- the belief that they could erase his memory, his life as a man, yet thinking in this way to preserve the memory of his crime: a black man, enslaved, fathering the child of a young white woman who loved him. I called the novel Inheritance. I wanted to claim the terrible history of my country, to honor the necessity of collective memory. I want to assert the power and capacity, the necessity, for human empathy and the deeper-than-skin-deep identification that comes with love.

My words telling Samuel’s story in 1861 are almost as close to myself as my body-carrying boys, my sons, whose keys, in 1985, or in 1991, finally in the door at night assuaged my panic, waiting, waiting, trying to contain the fears, not only of muggers but, yes, of police, fears I had learned about most specifically as I listened, as they did, to their father talking what is now known as The Talk: never run on the street, not even on your own block to catch the bus. Always show your hands. Never fail to be respectful even if police are insulting and disrespecting you. They have sticks, and guns, and your job is to come home safe.

My son’s best friend in college, proud of his new car stopped in front of our building in Manhattan, was thrown up against a car and searched or frisked,years before this assault had become a legitimized method with a frightening name. Once white in America, I watched and listened as I had learned to do in more creative, soul-expanding ways -- learning from my new family about African American history and culture -- witnessing my older son, always a lover of music, his face filled with mixed emotions as he listened in a high school classroom to Louis Armstrong singing the searing lyrics and haunting melody of “Black and Blue.”

My younger son loved poetry and has almost the same name as one of the falsely convicted boys in the Central Park Jogger case, so he wrote poems about them -- the animal names they were called, the possibility, later proven, of their innocence. Searching for healing, I introduced him to African American poetry, a centuries-long tradition of various and elegant forms, poems of lamentation, and of the grace of memory and of love.

Once white in America, I searched for space within myself to absorb new meanings; now, years later, meanings so deeply absorbed they are entwined inseparably with my sense of the world as it is, the self that I am. I watch the television film again, and again, of Trayvon’s sweet face, of Michael Brown gunned down in Ferguson, Missouri, of Eric Garner, a man in my own city screaming, “I can’t breathe.” I hear my husband’s voice, after nearly 50 years of living in New York City, his tones and even some pronunciations returning to the Southern sounds of his youth and childhood: "I remember Emmett Till. When he was killed, he was the same age as I was. I still remember it, how it felt to me then."

I want to reverse the meanings of the song I heard sung last month, after hundreds of listenings to old records, then CDs, this time by Audra McDonald who sounded so like Billie whose songs she was singing, whose gardenia she played with, on and off, on and off her thick black hair, whose drink she drank, put down, sipped again, whose graceful walk she walked, but sometimes wobbled, nearly falling, whose pain and anger she spoke in shouts and whispers about nightclubs and shameful insults, haunting memories and whites-only bathrooms when you very badly need to pee, of desertions and abandonments of many kinds, Audra singing such perfect Billie you could swear you were in the club hearing Billie Holiday’s tones, soft and low to contrast with the terrible words echoing through time, from mind to body to mind.

The bulging eyes and the twisted mouth...
Scent of magnolia sweet and fresh,
Then the sudden smell of burning flesh.

Their newborn silken flesh, the deep sea eyes, the graceful mouth; the first time I saw their faces, rose and tan, wide-staring eyes, one, then a few years later the other, hearing their father’s sigh of relief and cry of joy, the long, hard labors over, once, then twice, and me smiling and alive.

Skin darkened slowly as they grew into men. Are you half-black? someone asked when one of them was a child. He looked down. Which half?

What color am I, Daddy?

I captured and preserved these words in another story:

I mean, you know, what color am I? Really? Am I black like you?

Black men, body and mind, in this white, white country I write and rewrite.

It is 1863
and 1965
and 2008
and still we wait
for the bodies
to stop
falling, for our minds
to slow like rivers
after a storm,
waters
darkened to rich
olive brown by moist soil
lifted,
surfacing, warm.

It was Mississippi, he was just my age and I was scared, and angry...
It is Staten Island, New York...
It is Ferguson, Missouri...
No one indicted, no one held to blame.

We chanted loud, Women in Black, United Nations Plaza, 1999, calling out slowly the times Amadou Diallo was shot for pulling out his wallet. His mother’s voice in the vestibule where he was murdered, crying out his name -- Amadou, Amadou -- again and again and again.

It is 2015 and I could list so many names. I would pray, but I am not a believer, as people call us now, but I do believe in action, in what has always been called struggle, in what I insist on calling faith in the human capacity and responsibility to know and feel another human story. I witness my son, now a man of 40, marching from Washington Square Park up Fifth Avenue, across 34th Street, downtown on Sixth, long renamed Avenue of the Americas, to One Police Plaza. He marches and shouts with colleagues and friends: I can’t breathe! Black lives matter!

I believe in words. I am a mother/grandmother/writer/teacher/wife of a black man for 46 years/friend/Jewish-American woman who loves color and still knows words can sometimes, might somehow be, could be a part of the way, to everything. I am the tan woman whose sons are tawny amber autumn leaf and almond brown cedar umber spring earth brown, whose sons are black men now, the woman whose young nephew walks dangerous streets and rides on dangerous sidewalks, whose young granddaughter is “mixed,” but clearly not white, slowly discovering and naming her inheritance.

And right now, as I write in the early winter days of 2015, I want courage here, a collective call, a shared claim -- I am the mothers and fathers of black sons shot down on Northern streets and stairwells and highways. Whiteness isa social and political category created to embed in the mind a false description of the body, its purpose to confirm privilege and superiority, to deny solidarity. It is not me. I reject it. It is not you.

Jane Lazarre is the author of numerous works of fiction and nonfiction, including the critically acclaimed memoirs "The Mother Knot" and "Beyond the Whiteness of Whiteness: Memoir of a White Mother of Black Sons," both published by Duke University Press. She is a contributor to "Mothers Who Think: Tales of Real-Life Parenthood," edited by Camille Peri and Kate Moses, forthcoming from Villard Books in May.