Curing the fear of death: How "tripping out" could change everything 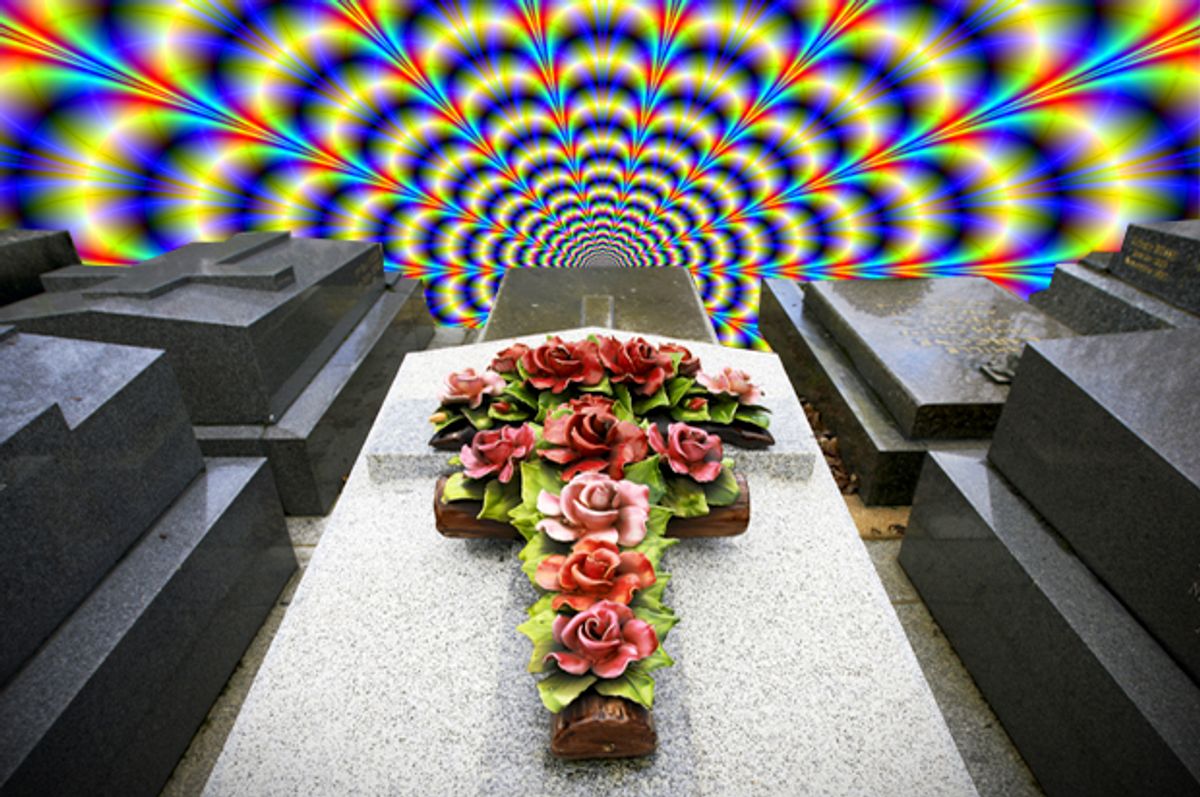 The second time I ate psychedelic mushrooms I was at a log cabin on a lake in northern Maine, and afterwards I sat in a grove of spruce trees for three and a half hours, saying over and over, “There’s so much to see!”

The mushrooms converted my worldview from an uninspired blur to childlike wonderment at everything I glimpsed. And now, according to recent news, certain cancer patients are having the same experience. The active ingredient in psychedelic mushrooms, psilocybin, is being administered on a trial basis to certain participating cancer patients to help them cope with their terminal diagnosis and enjoy the final months of their lives. The provisional results show remarkable success, with implications that may be much, much bigger.

As Michael Pollan notes in a recent New Yorker piece, this research is still in its early stages. Psychedelic mushrooms are presently classified as a Schedule 1 drug, meaning, from the perspective of our federal government, they have no medical use and are prohibited. But the scientific community is taking some steps that – over time, and after much deliberation – could eventually change that.

Here’s how it works: In a controlled setting, cancer patients receive psilocybin plus coaching to help them make the most of the experience. Then they trip, an experience that puts ordinary life, including their cancer, in a new perspective. And that changed outlook stays with them over time. This last part might seem surprising, but at my desk I keep a picture of the spot where I had my own transcendental experience several years ago; it reminds me that my daily tribulations are not all there is to existence, nor are they what actually matter.

The preliminary research findings are convincing. You could even call them awe-inspiring. In one experiment, an astounding two-thirds of participants said the trip was “among the top five most spiritually significant experiences of their lives.” Pollan describes one cancer patient in detail, a man whose psilocybin session was followed by months that were “the happiest in his life” — even though they were also his last. Said the man's wife: “[After his trip] it was about being with people, enjoying his sandwich and the walk on the promenade. It was as if we lived a lifetime in a year.”

Which made me do a fist pump for science: Great work, folks. Keep this up! Researchers point out that these studies are small and there’s plenty they don’t know. They also stress the difference between taking psilocybin in a clinical setting — one that’s structured and facilitated by experts — and taking the drug recreationally. (By a lake in Maine, say.) Pollan suggests that the only commonality between the two is the molecules being ingested. My (admittedly anecdotal) experience suggests matters aren't quite that clear-cut. But even that distinction misses a larger point, which is the potential for this research to help a great many people, with cancer or without, to access a deeper sense of joy in their lives. The awe I felt by that lake in Maine — and the satisfaction and peacefulness that Pollan's cancer patient felt while eating his sandwich and walking on the promenade — is typically absent from regular life. But that doesn’t mean it has to be.

The growing popularity of mindfulness and meditation suggests that many of us would like to inject a bit more wonder into our lives. As well we should. Not to be a damp towel or anything, but we’re all going to die. “We’re all terminal,” as one researcher said to Pollan. While it’s possible that you’ll live to be 100, and hit every item on your bucket list, life is and always will be uncertain. On any given day, disaster could strike. You could go out for some vigorous exercise and suffer a fatal heart attack, like my dad did. There’s just no way to know.

In the meantime, most of us are caught in the drudgery of to-do lists and unread emails. Responsibility makes us focus on the practical side of things -- the rent isn’t going to pay itself, after all -- while the force of routine makes it seem like there isn’t anything dazzling to experience anyhow. Even if we'd like to call carpe diem our motto, what we actually do is more along the lines of the quotidian: Work, commute, eat, and nod off to sleep.

With that for a backdrop, it’s not surprising that many of us experience angst about our life’s purpose, not to mention a deep-seated dread over the unavoidable fact of our mortality. It can be a wrenching experience, one that sometimes results in panic attacks or depression. We seek out remedies to ease the discomfort: Some people meditate, others drink. If you seek formal treatment, though, you’ll find that the medical establishment doesn’t necessarily consider existential dread to be a disorder. That’s because it’s normal for us to question our existence and fear our demise. In the case of debilitating angst, though, a doctor is likely to recommend the regimen for generalized anxiety -- some combo of therapy and meds.

Both of these can be essential in certain cases, of course; meds tend to facilitate acceptance of the way things are, while therapy can help us, over a long stretch of time, change the things that we can to some degree control. But psychedelics are different from either of these. They seem to open a door to a different way of experiencing life. Pollan quotes one source, a longtime advocate for the therapeutic use of psilocybin, who identifies the drug's potential for “the betterment of well people.” Psychedelics may help ordinary people, who are wrestling with ordinary angst about death and the meaning of life, to really key into, and treasure, the various experiences of their finite existence.

In other words, psychedelics could possibly help us to be more like kids.

Small children often view the world around them with mystic wonder -- pushing aside blades of grass to inspect a tiny bug that’s hidden underneath, or perhaps looking wide-eyed at a bright yellow flower poking through a crack in the sidewalk. (Nothing but a common dandelion, says the adult.) Maybe the best description of psilocybin’s effect is a reversion to that childlike awe at the complexity of the world around us, to the point that we can actually relish our lives.

What’s just as remarkable is that we’re not talking about a drug that needs to be administered on a daily or weekly or even monthly basis in order to be effective. These studies gave psilocybin to cancer patients a single time. Then, for months afterward, or longer, the patients reaped enormous benefit.

(The fact that psychedelics only need to be administered once could actually make it less likely that the research will receive ample funding, because pharmaceutical companies don’t see dollar signs in a drug that’s dispensed so sparingly. But that's another matter )

Of course, some skepticism may be warranted. Recreational use of psychedelics has been associated with psychotic episodes. That’s a good reason for caution. And a potential criticism here is that psilocybin is doing nothing more than playing a hoax on the brain -- a hoax that conjures up a mystical experience and converts us into spellbound kids. You might reasonably ask, "do I even want to wander around awe-struck at a dandelion the same way a 3-year-old might?"

So caution is reasonably advised. But what the research demonstrates is nonetheless remarkable: the way the experience seems to shake something loose in participants’ consciousness, something that lets them see beyond the dull gray of routine, or the grimness of cancer, to the joy in being with loved ones, the sensory pleasure of a good meal, or the astounding pink visuals of the sunset.