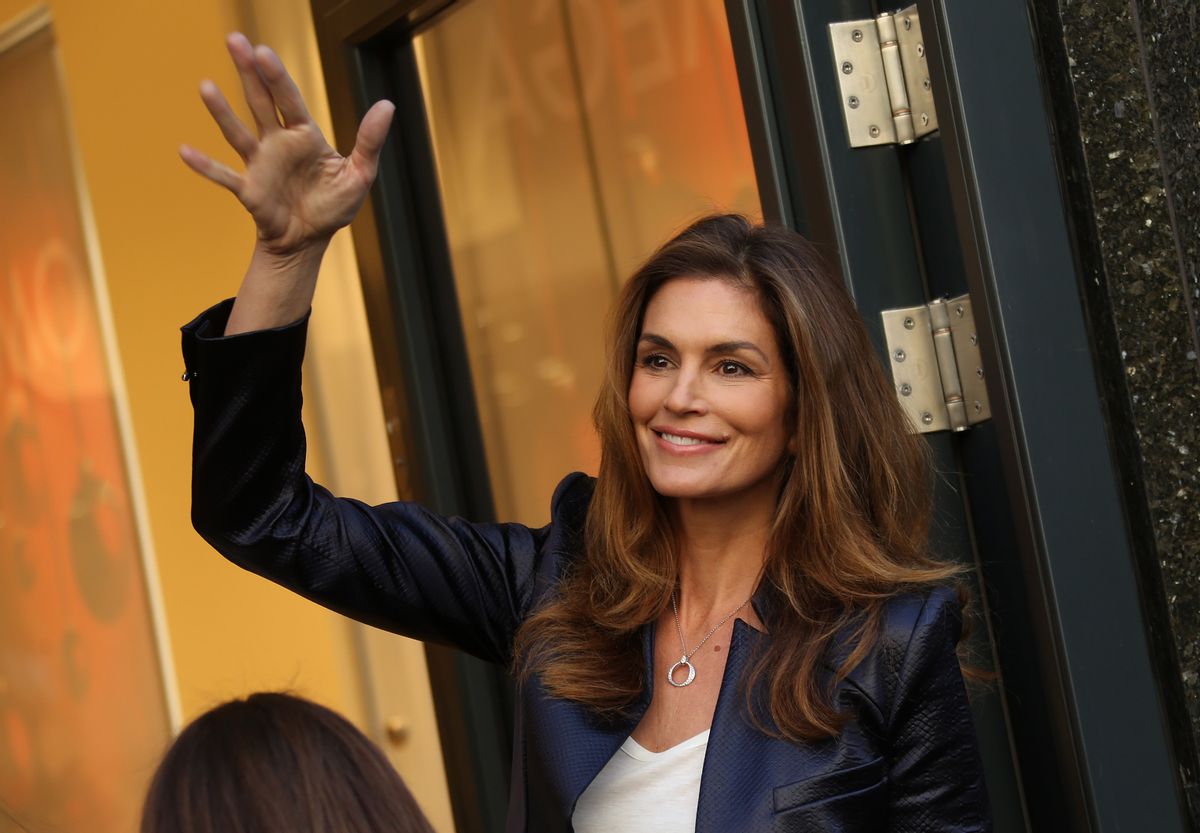 It’s incredibly disappointing that one of the most encouraging, inspirational photos of a mother’s body was disseminated non-consensually. We won’t link to the photo of soon-to-be-49-year-old supermodel Cindy Crawford, because we don’t want to be part of the problem, however, I can tell you that it’s a beautiful bikini shot that shows Crawford looking lithe and fit, with a gorgeous swell of abdominal softness and a few stretch marks. I haven’t been so captivated by an image of the female body in years—not since a butt-naked Madonna hitchhiked down the road, a cigarette dangling from her lips, in her 1992 coffee-table book Sex. Cindy looks like a bronzed goddess at the height of her womanly power. That she doesn’t look “perfect” is what makes her look, well, perfect.

It’s beyond unfortunate—in fact, it’s outrageous—that someone leaked the photos, allegedly unretouched outtakes from a December 2013 cover story for Marie Claire’s Mexico and Latin America edition. But the fact that this particular photo went viral in an instant, largely amid a flurry of supportive comments, underscores how eager women are for images of “real” bodies. To see one of our great American beauties without airbrushing, with a recognizably post-baby belly, the skin a little striped, the muscles displaying some cozy-looking laxity, felt not just refreshing, but almost revolutionary.

Crawford hasn’t commented about whether she was disturbed by the violation of the photo being leaked or by the image itself, but I’d guess that if anything, it was the former, as comments she made at the premiere of her new documentary last week indicate she knows that beauty is more than skin deep: “I really think—at any age—it’s learning to be comfortable in your own skin,” she said. “If women would treat themselves with the same kind of love they give to their friends, that would be such a great gift we could give ourselves. What makes you the most attractive is self-confidence. That’s what people see.”

More from DAME: "What the Black Lynchings Numbers Don't Reveal"

No one is obligated to be portrayed photographically in ways that fall outside of their comfort zone, so if Crawford is upset about the image being out there, I respect that 100 percent. But I do wonder: Will the overwhelmingly positive response encourage other famous women to present their post-partum bodies, without Photoshop, if they’re no longer the butter-smooth Sports Illustrated swimsuit issue ideal?

The beachball–bump pregnancy followed by a post-partum return to perfection is a daunting hurdle to clear, but it seems to have become de rigueur for female celebrities: If you want the best possible career opportunities as a pretty pro, you must speed back to your previous unicorn silhouette and return to work in the same sexy capacity as before. You pushed out that kid. Good for you! Now here’s a Pilates mat, some jumbo maxipads for that post-delivery bleeding, and a pair of those hospital-issue mesh panties to keep that cottony monster in place. Get crackin’, cutie. Heidi Klum walked for Victoria’s Secret six weeks after giving birth. The standard has been set. Chop chop!

More from DAME: "To Kill a Literary Legacy?"

The “Bump to Beautiful Again” photo story ties into our larger cultural anxiety around dropping out and falling behind—occupationally, socially, physically. In our ever accelerating, “everyone is replaceable” world, there’s a low-percolating fear of losing our place if we don’t stay competitive. We worry that if we step off the treadmill, in some cases literally, we’re doomed. Oblivion awaits if we don’t maintain peak form or maximum productivity, and if we do deviate from our ideal for some inconvenient reason, like, say, growing a child for nine months, we’re hassled to get back to where we were before. If we don’t come screaming back into the workplace—be it small business or show business—there’s a threat of being shoved aside. So seeing these women “bounce back,” appearing virtually unchanged after having a baby, may seem intimidating on one level, but on another, it’s reassuring. Whew, she made it back across the moat to Winnerville! Carry on! We may not identify with this triumph personally, but it resonates as larger-than-real-life wish fulfillment. She’s the same sexy, youthful lady we’ve always known—only a million times happier and more content now that she has little Egbert or Petunia to teach her the meaning of real love. Swoon!

What would it be like if some fancy lady celebrity flipped the script and showed not just the “before” and “after,” but also the “in-between”? No, I don’t mean the wan-but-delighted close-up of her face as she holds her swaddled newborn in her hospital bed immediately after delivery.  I mean the days and weeks immediately following birth when the belly is still distended, water is still being retained in weird places, and the milk has just come in, boobs bursting out of the nursing bra in their vein-streaked glory. A bikini photo on the tropical sands in which we can see the linea nigra not quite faded and the tummy pooch that may or may not recede over time. Even if the woman transforms back into SuperFox within a couple weeks, seeing the process—the journey, rather than just the destination—would be radical. More radical still would be the woman who willingly steps before the camera, drops her robe for a lingerie shot years after giving birth, and reveals a body clearly marked by motherhood. Celebrities stripping down for the camera is a constant, but the nudity often masks as much as it conceals. Roughly one in three deliveries in the United States is done by C-section, so why don't we ever see a scar? Does anyone have the nerve to keep it that real? It’d be the maternal equivalent of the genuinely makeup-free selfie. Yeah, honey, I woke up like this.

More from DAME: "Will Muslim Lives Ever Matter to the Media?"

The closest we’ve gotten to a celebrity postpartum pouf reality check came not from a model or an actress, but rather, a princess. Kate Middleton stepped in front of the cameras immediately upon being discharged from the hospital after giving birth to Prince George at Saint Mary’s Hospital, post-partum bump still clearly visible beneath the skim of her blue crepe de chine polka dot dress. She could’ve lashed down her abdomen with a Belly Bandit or worn a voluminous tunic. Instead, she presented a welcome visual reminder that “bouncing back” after childbirth is not automatic—or a given.

There’s nothing new about exceptional beauties being portrayed exceptionally. Over the past two decades, the “sexy preggy”–to–“snapped back and smashing” photo trajectory has become something of a media standard, an aspirational tale wrought in flesh—I accept this, and, to a certain degree, I even like it, if only for making the point that not every woman’s shape is irrevocably changed by pregnancy (though, let’s be frank, most of ours are). I appreciate body positivity of all kinds, including the joy of seeing a challenging fitness regimen pay off, and I’d never object to a woman showing a little midriff. It’d just take more guts to show a delicious squishy belly.