"Racism begins in our imagination:" How the overwhelming whiteness of "Boyhood" feeds dangerous Hollywood myths

In what imaginary Texas would Richard Linklater's characters not be surrounded by people of Mexican descent? 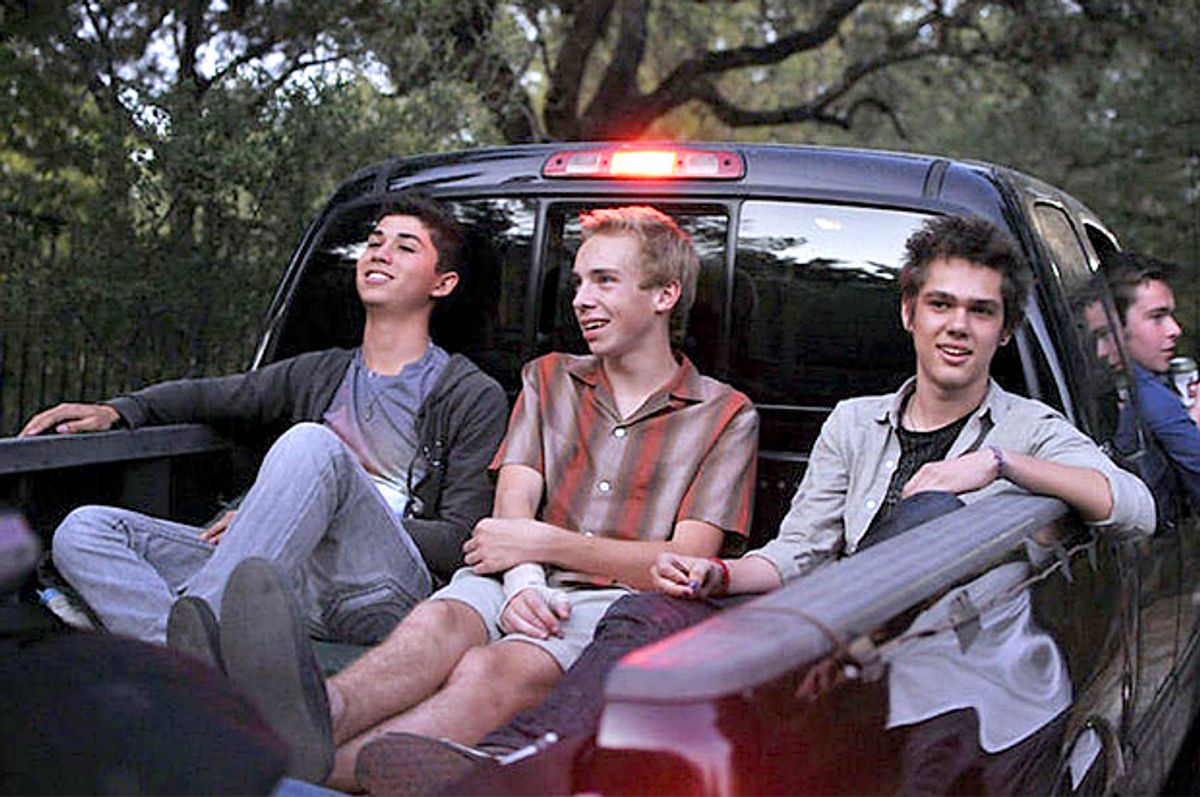 If a culture of people is deleted from our cultural artifacts, it destroys the quality of human life for all cultures involved. Afro-Latino historian and activist Arturo Schomburg taught that. On the work of cultural scholars, he said: “The work our race students now regard as important, they undertake very naturally to overcome in part certain handicaps of disparagement and omission too well-known to particularize. But they do so not merely that we may not wrongfully be deprived of the spiritual nourishment of our cultural past, but also that the full story of human collaboration and interdependence may be told and realized.”

Schomburg was a historian who collected black texts in order to counteract the erasure of a culture of people, be they African-American, Afro-Latino/a, or any part of the African Diaspora.  The New York Public Library named its vast library of black texts, located in Harlem, after him. Schomburg spent his life dedicated to uncovering “the full story of human collaboration and interdependence.” He understood that we must see this collaboration and interdependence so that it might be realized and perpetuated. He understood that it was not possible to have it realized if the only thing depicted was dependence. That perceived dependence is what I initially criticized in Richard Linklater’s best picture nominee “Boyhood” in a recent blog post:

“We see Patricia Arquette’s character, simply known as “Mom” (which I think is a bit reductive), travel throughout the state, have various jobs —including one as a professor at Texas State University— and at no level in her life do we see friends who are of Mexican descent, co-workers who are of Mexican descent or even people in restaurants who are of Mexican descent. I was LOOKING. As someone who lived in Texas for five years, and whose parents lived in San Marcos, where Texas State University is located, I know for a fact that this is an impossibility. The bulk of people in these areas are of Mexican descent —some of them are white Latinos/as (which can pass for plain ol’ white), but many of them are not— and you can see these folks in everyday life. Furthermore, you simply cannot avoid having them in your own everyday life. If you somehow manage this task, you must be trying very, very hard, and the Mom character is not depicted as that kind of person. She would literally have to stay in her house 24/7 and shoo people away from her door who are delivering her mail.”

The problem in “Boyhood” is twofold: the unrealistic lack of visible Latino/a characters in the family’s Texas communities, and the simplistic portrayal of the migrant worker Enrique, the lone Latino with a speaking role, who is “saved” from his life of manual labor when Arquette’s character offhandedly suggests he go back to school:

“The actual storyline that actor Roland Ruiz was forced to bring to life —bless him, we all need work— is the horrific “save me White person” trope that has been depicted in countless films, from ‘Dangerous Minds’ to ‘The Blind Side’.”

African-American scholars and critics have long questioned the depiction of blacks in film and, even though the problems have not been corrected, today we mostly agree that the problems exist. It began as invisibility. Black folk were not visible in mainstream films/media and if they were, they were subservient slaves or servants. We’ve only seen a change in this omission/depiction starting a little before my lifetime — that’s not long. I certainly can remember cringe-worthy moments with black characters in film as a child, and there are still many out there now, but we do see a wider range of possibilities today. How did this wider range come about? Talking. Writing. Native Americans, on the other hand, are still demanding to be depicted properly in film/media (cue condescending Tonto). Even though we keep insisting that we decimated them, they do still exist and deserve to be seen on the cultural landscape accurately.

I tried to address the same issue with respect to Latino/a visibility when I shared my blog with my friends, completely unaware that it would resonate with so many others. I wrote about a cringe-worthy moment, when the “white savior” trope was employed. I wrote about the decision to present a cultural landscape that did not clearly depict Texas as diverse. Some have argued that there were white Latino/a actors casted, but they certainly weren’t cast as Latino/a characters. It makes a difference. An example: My heroes, Aubrey Plaza and the writers at “Parks and Recreation,” could have chosen to cast Plaza as a white character, but instead they made the more dynamic choice and cast her as what she is: half-Latina. Furthermore, they cast her as a non-stereotypical Latina who isn’t subservient or buffoon-like. Considering the program takes place in small-town middle America — Pawnee, Indiana — they did not have to plan such progressive diversity, but they earn "Star Trek"-progress credits for doing so.

Note, I am not suggesting that every story needs to have a Latino/a in it.  If you are writing a story/making a film set in Norway, honestly, no need.  It’s when you situate your story in a historically diverse place that you have a responsibility.  Some have brought up Iñárritu’s excellent film “Birdman” as a counter-example, saying, “That film takes place in New York City and he didn’t cast any Latinos/as.” Actually, there were Latino/a extras, but beyond that, just look at the scenes in Times Square: There are countless people of every race and ethnicity you can think of and in one scene ambient Spanish can clearly be heard. Imagine what those scenes would have looked like if everyone in Times Square were white — maybe an episode of “Friends” or “Seinfeld” or a Woody Allen movie. Ultimately, “Birdman” is a film that is about white people and culturally sensitive to the landscape it was shot in.

But let me get back to the fact that people of color have been having this discussion for a long time.  Most recently we have Chris Rock who questioned Hollywood’s deletion of Mexicans both in front of the camera and behind the scenes. Los desaparecidos de Hollywood! We have Trevor Noah, the incredible comedian from South Africa, who loathes infomercials with degrading depictions of poor people from various countries in Africa—yet another condescending representation of people of color who need to be “saved” by Westerners.  Do I really need to explain that the idea itself is an imperialist one? If we look at the “Seven Up” documentary series of films, we see a very sweet, well-meaning English boy speak of his future goals, and one of them is to go to Africa to civilize the people. People creating cultural artifacts have to understand, once and for all, that “educating” or “saving” us harkens back to colonizing notions of having to go somewhere you’re not wanted and imposing what you think on people who don’t need you.

Nigerian novelist Chimamanda Ngozi Adichie is not only famous for her works of fiction, but also for a wonderful TED talk called, “The Danger of a Single Story.” She cautions that if a culture of people is depicted one way, only, over and over, it narrows our perspective as a people.  She reminisces about a fan who mentioned reading Chinua Achebe’s “Things Fall Apart” and lamenting that all Nigerian women are beaten. She responded by saying that she had read “American Psycho,” and she lamented that all white American men are serial killers. She explains there are plenty of stories about white men, so we know all the possibilities, but when we have only one story about another culture of people, our perspective is narrow and faulty.

Such a narrow and faulty perspective is what prompted various Caribbean ambassadors and government officials from Caribbean countries, representing the Garifuna people, to write a letter to the CEO of Walt Disney (Eisner, at the time), in 2005, in protest of the depiction of Caribbean natives in the “Pirates of the Caribbean” series. The series depicts the natives as cannibals in what was meant to be a very funny sequence. It was a cringe-worthy scene for me, especially since I knew that most people would laugh at it because they wouldn’t even think that this dangerous single story contributes to the notion that people of Caribbean origin do not have an honorable ancestry. Spaniards lied about the natives to justify murdering them, Shakespeare perpetuated the myth with his Caliban character in “The Tempest,” and we continue to perpetuate such trash today in film.  Again, it’s the ignorant native who must be educated and civilized. The myth is deadly.

“Deadly?” you ask. Yes. I am writing as if my life depended on it right now because I know what it is like to grow up in a world where you are not seen accurately on the cultural landscape and how that makes others view you as disposable, subservient. This is not hyperbole. In the Tucson Unified School District, just a few years ago, a group of schoolteachers decided that their students needed to see themselves within the cultural context of America. The only depictions they saw of themselves were of students who had to be saved before they landed in jail. Such depictions gave the students very little hope in life. To counteract that despair, the teachers offered an array of books, such as Howard Zinn’s “The People’s History of the United States” and many others that worked against that single story. Latino/a, African-American and white students participated in this curriculum, and the result was an overwhelming success. The students graduated from high school at a much higher rate than students who weren’t in the program. So, what did Arizona government officials do? They shut down the program, with the explanation that examining race in the U.S. is seditious.

This is all documented beautifully in the film “Precious Knowledge.” What is most moving about the film is when students who were white tried to explain to officials who were banning books and the program that the curriculum was helpful to them because they benefited from having a larger cultural perspective. Apparently, the fight to have ethnic studies in Arizona continues today.

We’d like to imagine that racism is only created with extreme acts, like bombs or chains. The truth is racism begins in our imagination. It begins with our stories. It begins with how we perceive others, how we depict them, how we imagine them to be, and what we can imagine for them. If we are to create a different world, we must first imagine it. That starts with actually seeing people and representing them accurately in the spaces they occupy, even the imagined ones on film.

Grisel Y. Acosta is an assistant professor at Bronx Community College—City University of New York.. She received her Ph.D. in English—Latino/a literature from the University of Texas at San Antonio. She is currently working on a poetic memoir, "Chica!Go!: An Afro-Latina Punk Odyssey," and "First Spanish," which tells the story of Chicago’s Logan Square neighborhood in the 1980s and 1990s through the eyes of early Latino/a residents.