We are all d**k-measurers now: The Oscars and awards-season devalue and pervert art

"Boyhood" or "Birdman"? Beck or Beyoncé? Who cares. We must stop turning creativity into another dumb competition 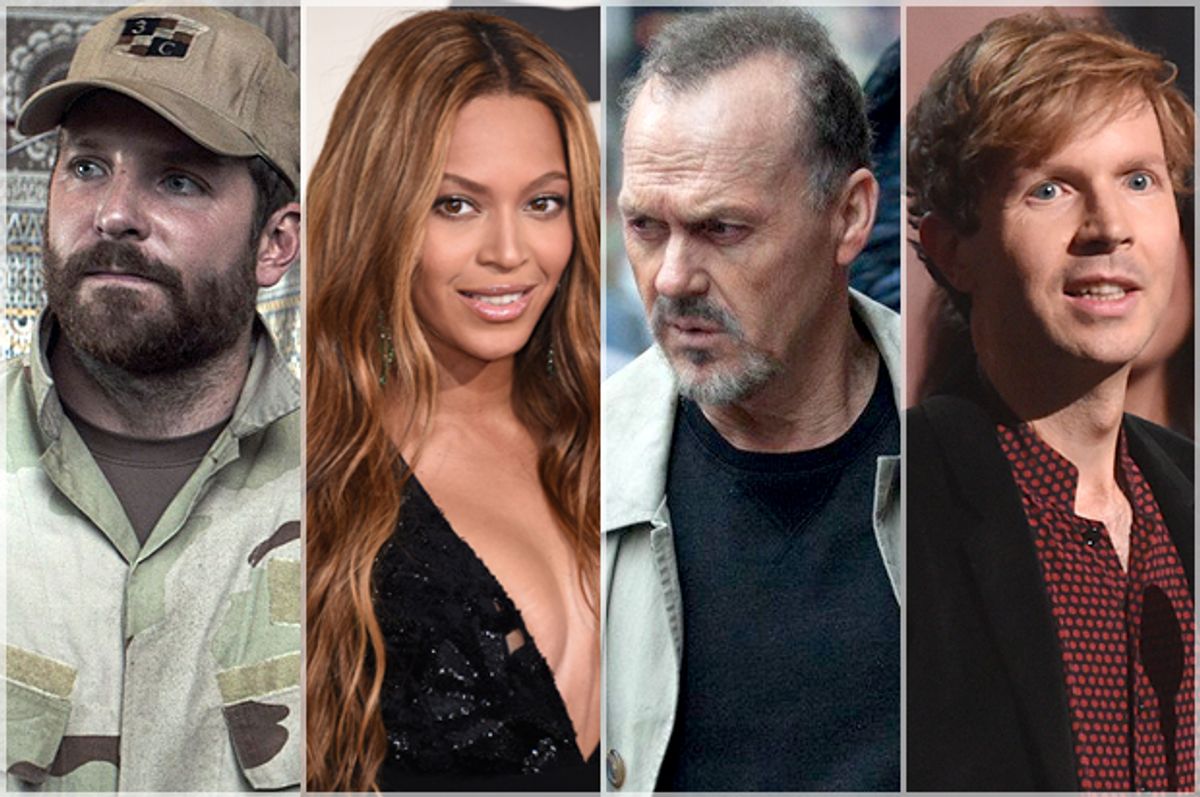 The other night I watched "All Is Lost," the 2013 film about an aging sailor whose solo voyage in the Indian Ocean goes horribly wrong. The aging sailor happens to be Robert Redford. He’s the only person on-screen for the entire film and, other than a brief opening voice-over, he’s virtually silent.

I’ve never been a huge Redford fan, but I was blown away by his performance: by the physical rigor of the role and by how he uses his body and his face and his hands to convey emotion. "All Is Lost" is about a lot of things—solitude, hope, invention—but at its heart, it’s a parable about the human compulsion to try. Cunning and effort not only keep the old man alive; they express his essential selfhood in the face of nature’s indifference.

As should be clear, I was deeply moved by "All Is Lost." But when it was over, I gave in to another sort of compulsion, which is, I’m afraid, quintessentially American. I began to wonder if Robert Redford had won the Oscar.

For the record, he wasn’t even nominated.

But that’s not the point.

The point is that rather than continuing to let the film works its particular magic on me (by which I mean take me deeper into my personal fears and desires) I had ducked into this other narrative, which had to do with determining what sort of public acclaim the film, and its star, had earned.

There are, of course, plenty of reasons to praise the Academy Awards, which will be held this Sunday evening. It’s a celebration of our most popular cultural art form, a chance to recognize the thousands of mostly unsung artists who make the Hollywood dream machine hum. It’s also cracking good entertainment, an ego pageant of the highest order. There’s something deeply gratifying in seeing our outsize cinematic heroes reduced to nervous contestants. The actors, especially, turn in some of their finest performances in those tender split-screen shots after the winner is announced, when the losers have to pretend that they have not just been humiliated on live television before the rest of their peers and 50 million snacking viewers.

At this point, I can hear many of you saying to yourself, Hey, dude. It’s just the Oscars. Chill out.

But it’s not just the Oscars.

Beneath the pomp itself is what you might call the Oscars Impulse, our cultural tendency to turn every single form of creativity into a competition. It’s what capitalism does to our souls.

Little wonder, then, that our Athletic Industrial Complex has gone berserk over the past two decades. Or that a growing share of our television programs are dedicated to absurd contests over who can bake the best cupcake or pull the most profitable junk from a storage unit. Little wonder that the vast majority of our political coverage focuses on polls and fundraising (who’s winning) rather than policy (how they might govern).

That’s depressing enough. But I get it. The fantasy in all these realms has to do with power. Specifically, the power to quench narcissistic need.

What happens, though, when the competition is about works of art? About a book or a song or a play or a film?

Isn’t the whole point of art that it inhabits us in a radically subjective way? And that our ability to engage with it—to feel implicated and therefore in some way transformed by it—relies on our distinct sensibility, our needs, our emotional life.

How in God’s name does it make even the tiniest bit of sense to compare such works of art, let alone to judge one superior to a set of others? Is “The Brothers Karamazov” better than “Anna Karenina”? Is “The White Album” better than “Exile on Main Street”? Is “Boyhood” better than “Twelve Years a Slave”?

Forget seeking to answer these questions. Can anyone even ask them without feeling (at least a little bit) like you’ve missed the point of art?

What I’m getting at here, rather crankily, isn’t just that competitions are antithetical to the spirit of art. They actually undermine its purpose. Rather than being drawn deeper into conversation with ourselves—and therefore away from the bullshit of our score-keeping egos—we wind up around the water cooler handicapping the race.

What a dead-end question.

Years ago, as the rock critic for the El Paso Times, I was sent to cover the Grammys. This was the year (1989, if you must know) that the two leading contenders for the big awards were Tracy Chapman’s “Fast Car” and Bobby McFerrin’s “Don’t Worry, Be Happy.”

It was my ardent belief that “Fast Car” was a genuine work of art, an unflinching folk anthem about a poor woman desperate to escape her circumstances. “Don’t Worry, Be Happy” felt like a lightweight by comparison.

But that was just the way I saw it at age 22. I worshiped the slightly mawkish intensity of Chapman’s parable and her tinny strumming. I loved hearing her sing, “I had the feeling I could be someone” because I had that feeling, too.

In the years since, I’ve come to recognize that McFerrin’s song wasn’t any worse than Chapman’s. It was just a different song, a joyous anthem whose campy calypso flourishes concealed a biting satire of the phony optimism peddled by the first President Bush, which typified the Age of Reagan.

I do remember having to rewrite the lead of my story for the El Paso Times about seven times, as these two tunes racked up wins. By the laws of the Oscars Impulse, after all, it was my job to declare one or the other of these musicians the “big winner” of the night.

I still listen to “Fast Car” and “Don’t Worry, Be Happy” from time to time. I recently played them for my kids. They’re wonderful in completely different ways.

I have no memory of which song wound up with more awards.

I’m not sure anything could matter less.