Patricia Arquette wins the Oscar for "aging gracefully" -- oh, and for her performance in "Boyhood"

Patricia Arquette has been honored for her brilliance in "Boyhood." She gets as much credit for "aging gracefully" 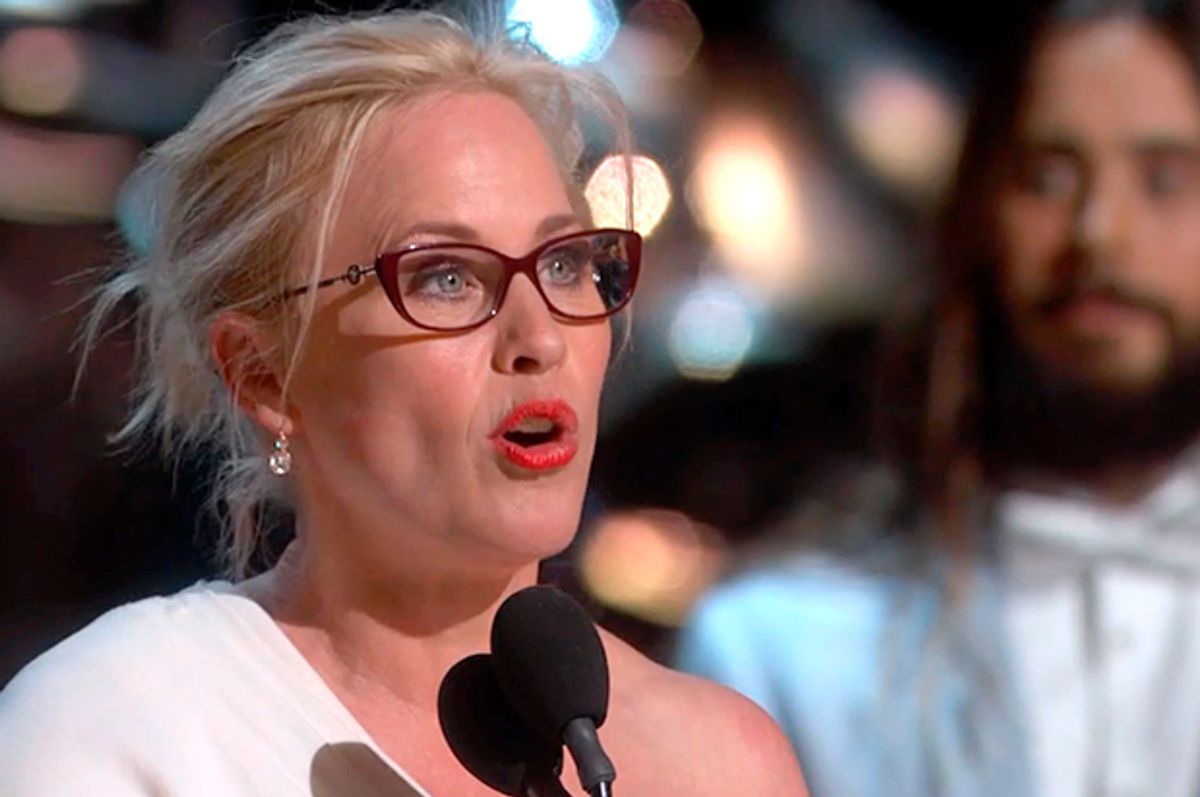 Patricia Arquette was an early favorite for best supporting actress, so it’s no real surprise that she took home the Oscar tonight. Part of what was so brilliant about “Boyhood” was how it captured the quiet complications of being a person, letting its characters be flawed in all of the familiar ways that humans are imperfect. Arquette’s Olivia was easily the most complex of them all.

She married, had children and divorced young. She was self-sacrificing, but also selfish and at times quick to lose her temper. She was an independent, ambitious academic who was entangled with abusive men who couldn’t match her intelligence. She was the primary breadwinner in her family who steadily built a full, robust life outside of her children. And yet she was still worried the meaning would drain out of her very existence once her son left for school, stripping her of her primary identity as a mother. The role gave her space to be all of these messy things at once, and her performance was a raw, gutsy meditation on those profoundly human contradictions.

But the most repeated praise for Arquette’s performance was how brave she was for something that had nothing to do with her talent -- aging on-screen in a project filmed over 12 years. A candid (though incredibly unlikable) member of the academy put it this way:

And fair enough. Hollywood is a particularly draconian enforcer of our culture’s beauty standards. Women over 40 in the industry are often either invisible or made to appear tragic. (In a nod to Arquette’s performance at the Golden Globes, host Amy Poehler wryly observed, “‘Boyhood’ proves that there are still great roles for women over 40 -- as long as you get hired when you’re under 40.”)

Arquette’s interviews on the subject of aging on-screen were also delightfully subversive and honest about the process. She called watching herself get older “gnarly and intense,” but also empowering. “I was excited about [aging throughout the film]," she told the Telegraph. "When [director Richard Linklater] first told me about it, I knew the kids would grow up really fast, and then I knew Ethan and I would get old really fast. I wanted to move into this next phase of my career, and I wanted to leave all of that behind."

She expanded on why she felt the role was so liberating in an interview with the New York Times:

This idea of the world expecting you to remain an ingénue forever -- it’s a very short shelf life if you’re going to commit to that as your career, and I knew that early. I was trying to get out of it for years. I gotta get old, people, do you understand?I need space to grow and get old and be a human being. I don’t want to be trapped in your ingénue bubble. And I don’t agree with it either, by the way.

Arquette is absolutely right about the importance of the role, and her performance has undoubtedly created more space for women in film. But there is something revealing about how enthusiastically the industry has celebrated her for aging “gracefully.” The flip side to all of the praise for Arquette’s bravery in avoiding cosmetic surgery is an unspoken admonition of the women who don’t. It may be terrifying to age “naturally” in Hollywood, but it’s equally terrifying to age while attempting compliance with its forever young standard of beauty.

Think of the titters that have been tittered over the last 12 months about women’s aging faces showing signs of “work.” Last year at the Oscars, host Ellen DeGeneres applauded “one of the most amazing Liza Minnelli impersonators I have seen in my entire life” as the camera trained in on Minnelli’s face. The Internet went rabid when Renee Zellweger showed up to the Elle Women in Hollywood Awards looking, well, not like Renee Zellweger. People speculated that Lark Voorhies bailed on a “Saved By the Bell” reunion with Jimmy Fallon because years of plastic surgery had made her virtually unrecognizable. Uma Thurman appeared in public without wearing any eyeliner and a chorus erupted about what kind of plastic surgery she had done.

Like most other things the world demands of women, surviving the dual mandates to not age at all but to also age “gracefully” and “naturally” requires a kind of schizophrenia to navigate successfully. Don’t look old, unless you’re going to look great when you’re older. But since you won’t know that until you actually get old, maybe take some preventative steps to keep things tight. But not too tight, of course. Then you’ll just look tragic.

It’s a rigged game. And good luck winning it.

This is true for women aging in Hollywood, but it’s something that women of all ages struggle with, the demand to look whatever version of "natural" is natural at the time. One of the more anxiety-inducing things a person can ask me, at least in my work life, is to “come camera ready” when I’m asked to do an interview. This request presumes I can do a number of beauty-related things that I have never been able to do. The list includes but is not limited to: apply foundation, line my eyes, conceal the port-wine stain on the upper left part of my forehead, blow dry and style my hair.

Do I resent the way women are expected to look on television and film? Yes. Do I plan on showing up barefaced against those harsh lights so I can be the change I want to see in the world? No way.

Arquette's performance is the reason she took home the Oscar tonight. But she also showed real courage -- both personal and professional -- in her willingness to be a human woman on-screen. But so does any actress of a certain age who simply exists in an industry that would rather she just go away. If only there were enough awards to go around.