Rudy's whitewash: What his self-serving op-ed reveals about how conservatives see the world 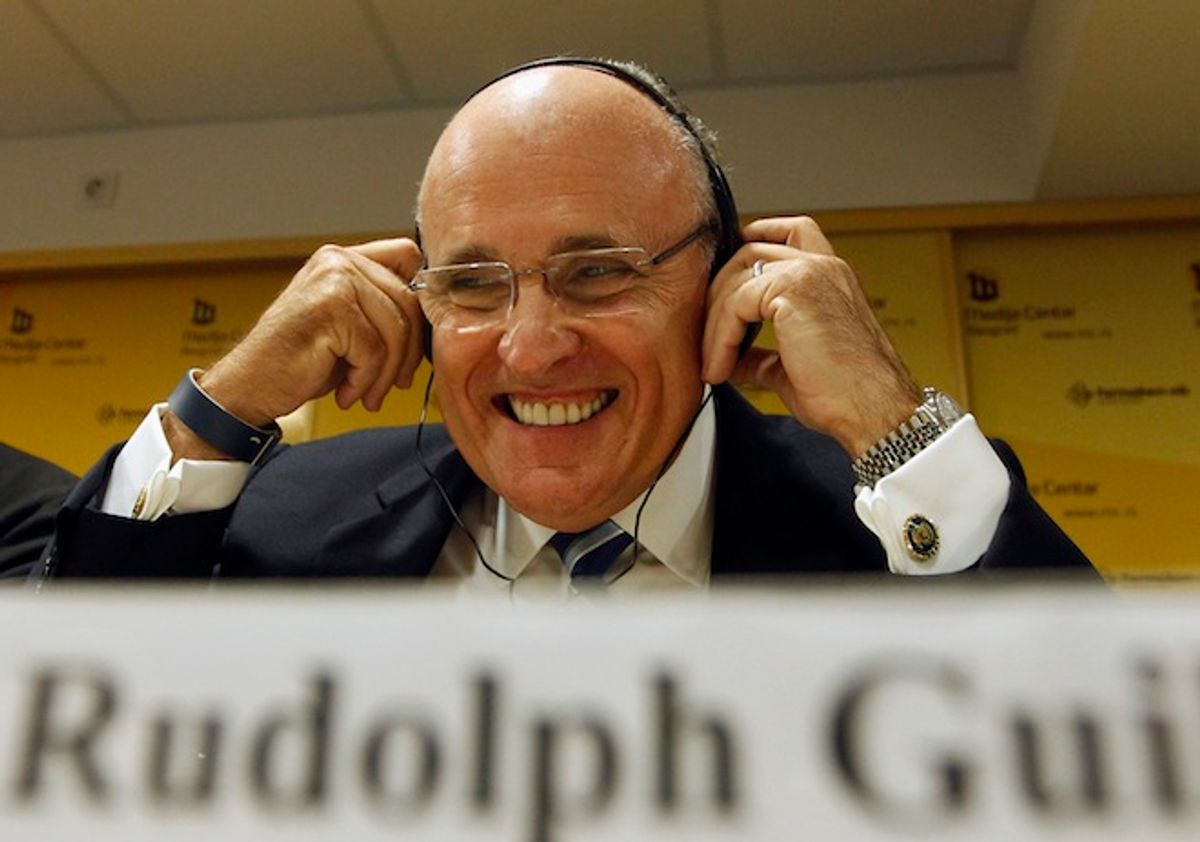 Five days after he sparked a political firestorm with his remarks that President Obama doesn't love America and "wasn't brought up the way you were brought up and I was brought up," Rudy Giuliani is out with a new op-ed in the Wall Street Journal, in which he avows that he "didn’t intend to question President Obama’s motives or the content of his heart." Instead, the former New York City mayor asserts, he was simply trying to make a point about "the effect his words and his actions have on the morale of the country, and how that effect may damage his performance."

It was only late last week that a defiant Giuliani dredged up Jeremiah Wright and told Megyn Kelly that he continued to have "doubts about his emotions, his feelings, his attitudes and the way in which [Obama] developed," but the former mayor now wants us to hear him out about how he meant nothing personal toward the president. "Irrespective of what a president may think or feel, his inability or disinclination to emphasize what is right with America can hamstring our success as a nation," Giuliani writes. "This is particularly true when a president is seen, as President Obama is, as criticizing his country more than other presidents have done, regardless of their political affiliation." Giuliani proceeds to assail Obama for a "lack of moral clarity" in his words about Islamic fundamentalism, American exceptionalism, and the country's history. Why can't Obama simply pay tribute to America every once in awhile, Giuliani wonders, ignoring all the times Obama has done precisely that.

Maintaining that harbors "no ill will" toward Obama, Giuliani writes that the president's "personal journey is inspiring and a testament to much of what makes this country great." As it so happens, Obama himself has made much the same point, going even further than Giuliani into chest-pumping, American-exceptionalism territory:  “I stand here knowing that my story is part of the larger American story, that I owe a debt to all of those who came before me, and that in no other country on Earth is my story even possible," he declared in his keynote address at the 2004 Democratic National Convention, the speech that propelled him to political stardom. Four years later, in his famed speech on race, then-Sen. Obama reiterated those remarks.

But Giuliani castigates the president for not "acting and speaking in a way that draws sharp, clear distinctions between us and those who threaten our way of life," citing Obama's criticism of U.S. torture techniques in the wake of 9/11. Obama's left-wing critics would note that for all the president's vociferous denunciations of torture, he has opposed legal accountability for those who designed and executed the country's notorious detention and interrogation program. But Giuliani's fragile, Manichean mind can't tolerate even the mildest suggestion that ours is not an infallible country, and that there may be uncomfortable truths with which we should come to terms. Fox News host Andrea Tantaros offered a particularly telling -- if crude -- case study when she responded to the release of last year's torture report by declaring that "America is awesome" and charging that "this administration wants to have this discussion to show us how we're not awesome." For a cast of characters constantly proclaiming their own toughness and self-assurance, these are some remarkably thin-skinned people.

In one sense, Giuliani is onto something when he seeks to de-personalize his remarks about Obama. At a more fundamental level, his criticism is revelatory of the right wing's cast of mind, with lessons that go far beyond understanding conservatives' contempt for the president.