The Quran isn't the problem: Violent extremism is about more than just sacred texts

There are those who insist that violence is intrinsic to religion's sacred texts. Here is what they're missing 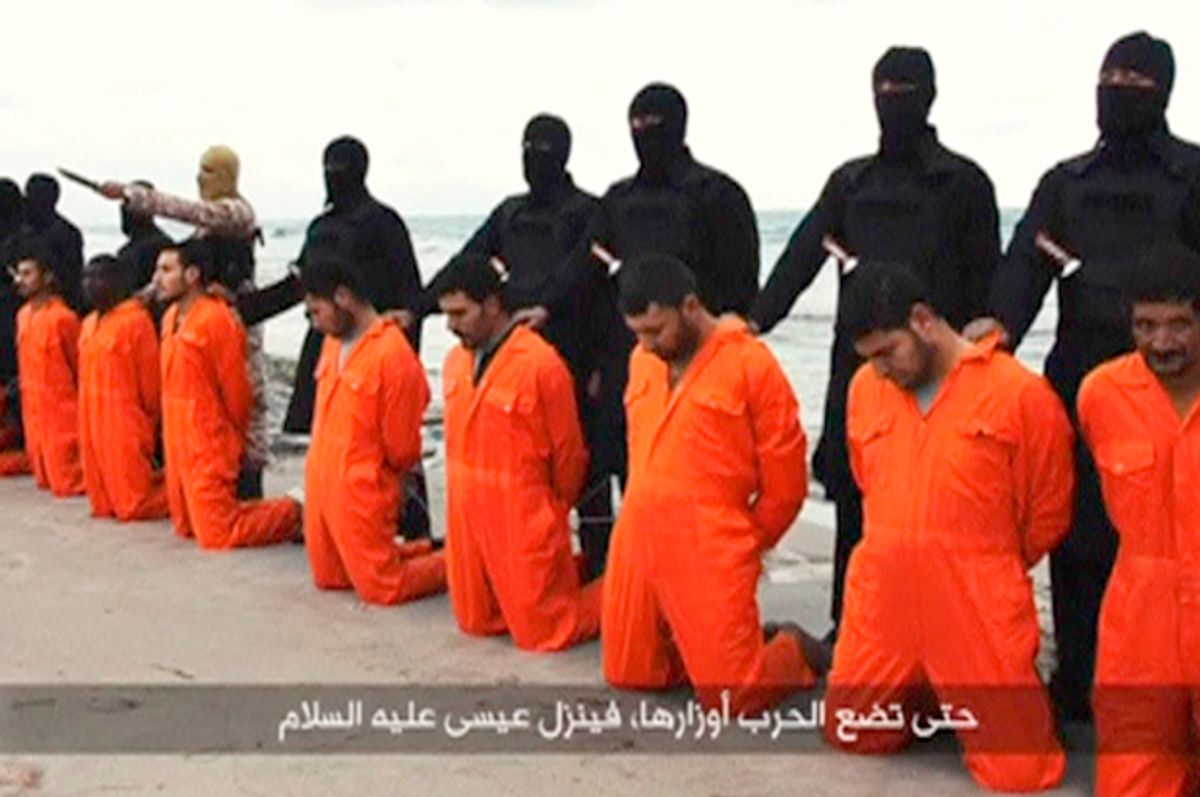 In a column for Salon earlier this month, “Faith-fueled forces of hatred: Obama’s religion speech was troubling — but not for the reasons the right alleges,” Jeffrey Tayler suggested that the real problem with the religious extremism which increasingly confronts us lies deeper than merely the heinous actions we have witnessed. Rather, Tayler argues, it is inscribed in the very sacred texts of the world’s largest religious traditions. "We should not ascribe vile behavior to misreadings of the canon," the argument goes, because that sense of hatred and violence is actually at the heart of religions like Judaism, Christianity and Islam — whose scriptures include some admittedly stomach-turning passages.

As a Biblical scholar, however, I beg to disagree with this analysis, which seems like an oversimplification of the situation, and a forced dichotomy where other options exist.

There is no denying that Judaism, Christianity and Islam contain in their sacred books verses and chapters that are distasteful, awkward, unpleasant, and (especially from our modern point-of-view) morally dubious. Not only scholars of religion, but all those who attempt to take those scriptures seriously, are forced to grapple with those issues.

While the heightened attention to the destructive potential of these texts is perhaps new, discomfort with many of these passages is not, and each of these faiths has significant interpretive traditions which face these difficulties head-on, in many cases managing to neutralize or tame them, so to speak, through symbolism, allegory, contextualization or similar approaches. With the exception of the most die-hard fundamentalist readers (who insist on a strictly literal reading, with no room for interpreters to “remediate” such difficulties), each of the three monotheisms offers credible and creative ways to address these texts thoughtfully, respectfully and effectively.

They do this because, at least in their classic forms, none of those three traditions consider themselves empowered to radically edit  their canonical literature. Being unable to jettison words that previous generations judged to be inspired, the next best option is finding appropriate ways to de-fang these “texts of terror,” as scholar Phyllis Trible has aptly called them.

Inasmuch as I suspect every major religion tradition has texts such as these, which are hard to reconcile with modern moral standards, I think that blaming the texts themselves is somewhat misleading—especially since the vast majority of these religions’ adherents show no inclination to act out the troubling content of their own faiths’ sacred texts.

Textual violence does not necessarily get translated into physical violence; in fact, very seldom is that the case overall, I would argue. It would be very hard to find a Jew who advocated the kind of genocide that some passages of the Hebrew Scriptures could be read as endorsing. There are very few contemporary Christians who view the bloody language of the Book of Revelation as license for wholesale slaughter of the wicked in Christ’s name. And it is only a very small fraction of self-described Muslims who focus on verses in the Qur’an that (at least on the surface) appear anti-Jewish or anti-Christian. In each case, no one denies the existence of those passages. They are there, and educated Jews, Christians and Muslims have long been aware of them.

Aware of them — and yet they largely ignore them in terms of their daily lives. Those texts simply do not guide the ways in which the overwhelming majority of those faiths understand and live out their faiths. That, I believe, is for at least two reasons:

Within these traditions, there is always a plurality of voices and approaches to almost any given subject. In the Hebrew Scriptures, Proverbs, Ecclesiastes and Job offer radically different approaches to the issue of theodicy. Within the Christian Scriptures, questions of slavery and the role of women are addressed differently in different places. While I am less familiar with the Muslim tradition, my reading of the Qur’an leads me to believe that it does not offer one single, univocal answer to most important issues, either. There are many possible angles from which to approach any issue, and this is what makes “proof-texting” so problematic (and so potentially dangerous). To suggest that a single verse summarizes all of a complex religion’s thought on some issue seems so overly simplistic as to be almost laughable. And yet there are many practitioners of those faiths who do exactly that—choosing one or two verses, and making them the “lens” through which every other part of that religion is viewed, the “interpretive key” to the tradition overall. Depending on which verses are selected, a religion can consequently be viewed as loving and inclusive, or as hate-filled and hostile.

In a very real way, many people begin with their theological conclusions already formulated, and canonical texts provide the paving stones to construct the path to get them there. Such selectivity allows one to shoehorn a richly variegated religious tradition into a pre-determined template, even when it may be a distortion, a radical amputation, or a complete caricature of the religion concerned. There are always enough texts that can be drawn upon to validate such arguments — while skillfully disregarding or ignoring those that might argue otherwise.

In my field, we call that “eisegesis,” forcing meaning upon a text, as compared to the typical “exegesis,” trying to draw meaning from a text. The former technique is all too often employed in the service of political and social agendas.

Perhaps it is an inevitable corollary of the weight we tend to attribute to religious texts, and the desire to use them to sanction and justify our behavior. But, whatever the motivation, it is a twisting, a misrepresentation, a shrinking, of a religious tradition’s heritage. It is always sad; and, I would argue, it is almost always illegitimate and harmful.

2) The very complexity of these scriptural traditions means that more “marginal” voices in the text often tend to be swallowed up and diluted by other, stronger and more predominant currents.

Jesus’ command to “Love your neighbor” (and even your enemy!) was generally seen to trump more militaristic and chauvinistic verse — but not always, obviously.

Authoritative interpretive traditions have grown up in both Judaism and Christianity that provide alternative approaches to problematic texts; the blessing on those who “dash little children against the rocks” in Psalm 137:9 came to be allegorized by the Fathers of the Church as those who smash their venial (small) sins against the rock which is the justice and mercy of God. Later rabbinic tradition said that the Canaanite nations who were supposedly to be annihilated had ceased to exist, and so those injunctions were effectively null and void and, in any case, it had only been the truly wicked and unrepentant among those nations who were intended anyhow.

The patristic and rabbinic traditions were not blind to the moral awkwardness of those texts, and provided ways to read them that were spiritually healthier, without needing to excise the offending portions from the Bible. I strongly suspect that there are similar traditions of reading within Islam, concerning texts in the Qur’an that initially appear to be aggressive or violent. Through this kind of interpretive alchemy, lead can be turned into gold, and often has been by the brightest minds of our respective histories.

All of which is to say that, to my mind, the existence of difficult passages in sacred texts is not, in and of itself, the problem. In a certain sense, those texts remain “inert” until they are interpreted—and that interpretation can be as loving or as hateful as the mind of the interpreter determines to make it. While sacred texts are not infinitely malleable, there is a much broader spectrum of interpretive possibilities than a surface, literal reading might tend to suggest, and many religious traditions not only acknowledge that spectrum, but actively draw upon it, in providing guidance to the faithful. The tools for transforming painful texts into something useful and spiritually enriching have existed (and have been used) for centuries, in ways that are sophisticated, nuanced and often surprisingly insightful.

For many (most?) Jews, Christians and Muslims, their sacred texts are fixed, and will abide no further editing. Given that fact, an important antidote to religiously-justified extremism lies not in blaming or deleting harsh and challenging texts, but in promoting a religious frame of mind which seeks the more positive, inclusive and accepting interpretation, and shuns readings that are oppressive, harsh or violent. Part of that is the work of more effectively sharing our religions’ interpretive heritage with a wider and wider public, and part of it lies in cultivating attitudes of the heart that are amenable to more “friendly” interpretations (which already exist, but need to be more broadly communicated). It is an immense task, which will require a tremendous effort on the part of parents, educators, scholars and religious leaders. But it is by no means an impossible task, and so many of the tools we need already exist and simply need to be employed.

Forming the mind and shaping the heart: These, I believe, are two simple but equally necessary approaches which are incumbent upon all of us, to help stem the tide of radicalization—not by circumventing our sacred texts, but by delving into them more profoundly, in ways that offer greater benefit for everyone.

Murray Watson is a professor of Biblical studies and interfaith dialogue in London, Ontario.