"Who gave this son of a b*tch his green card?": On the Oscars stage, there's no such thing as a joke between friends 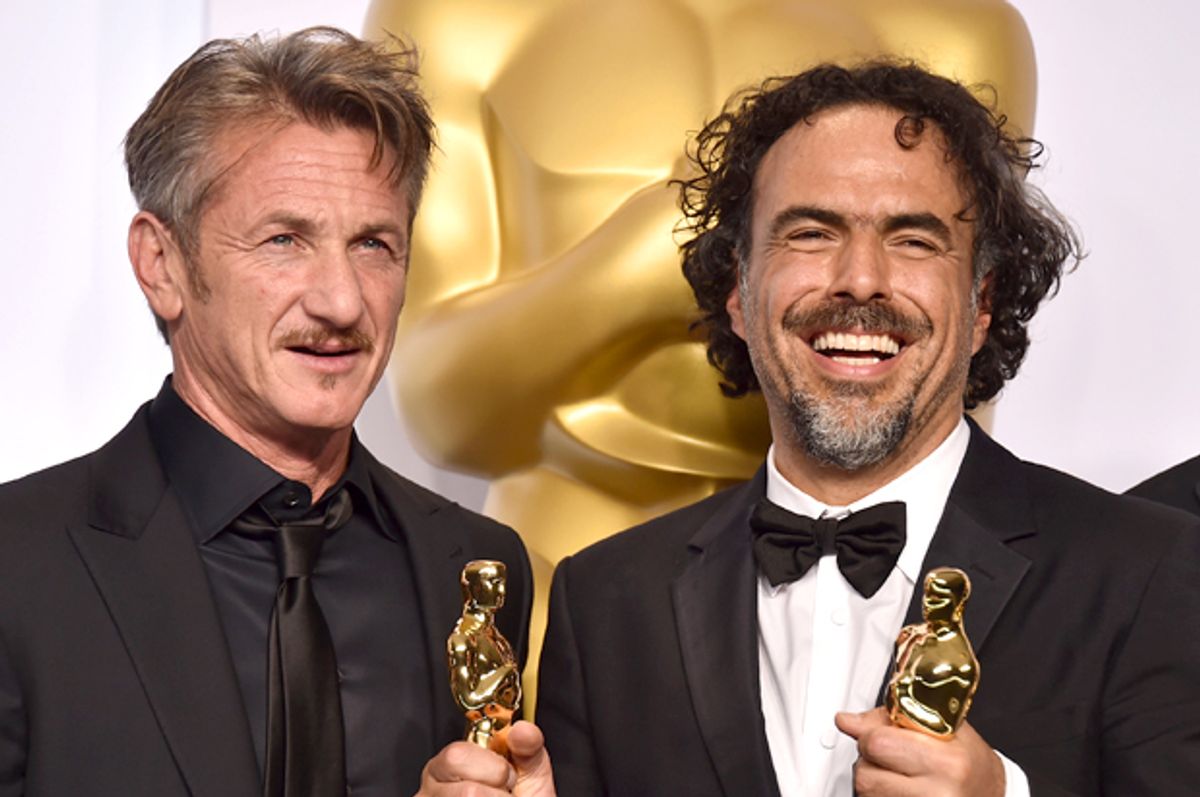 Alejandro González Iñárritu had a very big night last night. His Hollywood redemption tale "Birdman," which did not net Michael Keaton the belated Academy Award he deserved for "Beetlejuice" but still managed to take home many of the night's top honors, including Best Original Screenplay and Best Cinematography for Emmanuel Lubezki, brought Iñárritu Oscars for Best Director and Best Picture. As presenter Sean Penn did the honors for the final award of the night, he opened the envelope, saw Iñárritu's name and blurted out: "Who gave this son of a bitch his green card? 'Birdman!'"

It's funny (?) because Iñárritu is from Mexico, but he works in Hollywood. Eddie Redmayne, a Brit, upset fan favorite Keaton for the Best Actor trophy and received no such ribbing, as Cate Blanchett, an Australian, missed her opportunity to go land an immigration gag during his big moment.

Iñárritu played the moment off buoyantly, making his own joke about how for the second year in a row, a Mexican-born director took home the Oscar — last year's honors went to Alfonso Cuaron for "Gravity": "Maybe next year, the government will inflict some immigration rules (on) the academy. Two Mexicans in a row, that's suspicious, I guess." Then he capped off his speech with an impassioned dedication to his fellow Mexicans: "I pray that we can find and build the government that we deserve. And the ones that live in this country who are part of the latest generation of immigrants in this country, I just pray that they can be treated with the same dignity and the respect of the ones who came before and (built) this incredible immigrant nation."

Not bad for a guy who had to be reminded in the heat of the moment to thank his wife. (Always thank your partner, folks!)

According to the Associated Press, Iñárritu brushed off concerns others voiced about Penn's joke after the ceremony. "I found it hilarious," Iñárritu said. "Sean and I have that kind of brutal (relationship) where only true friendship can survive."

There's no reason to believe that's not true — as comedian Sara Benincasa tweeted last night, "Innaritu and Penn are both rich successful dudes who probably bro down in piles of money and make fun of each other." As is their right! Friends know where the line is that they allow each other to cross and none of us know the particulars of their "brutal" friendship. My own family includes several different nationalities, and cultural differences do come up, and when they do, sometimes we joke about them, as is our privilege as private citizens with functioning senses of humor.

But Sean Penn wasn't pulling his buddy's leg at an afterparty or backstage. He planted himself front and center on stage and made a groaner of a green card joke at the climax of a long and weird ceremony that capped off a long and often intense Oscar campaign season that left many viewers furious over an #OscarsSoWhite and acting and directing snubs for "Selma." None of that necessarily is Penn's responsibility to ameliorate, but would it have killed the guy to keep the ethnic jokes to himself until he and his friend were safely off-screen?

I'm sure Penn just felt excited to see his good friend's name in the envelope and responded the best way he knew how, with a comment that he perceived as fond. But even if the Oscars are Hollywood's biggest night of the year, once the stars are on stage during the broadcast, the awards cease to belong only to them. Iñárritu might have been the man of the night, but this wasn't a private party, or even a Comedy Central roast where the form explicitly calls for brutal personal jokes that cross the line of good taste. The Academy Awards are really for the viewing audiences at home. Isn't that the contract behind this spectacle? They put on designer finery and learn to pronounce each others' names and walk up on stage without making an ass of themselves, and we watch and clap and tweet and fawn and criticize and generally remind them that they're still relevant in a world where television in all of its mutating glory is fast overtaking their industry in relevance, quality and diversity. And when an A-list star makes a tasteless joke in the middle of all of that, it can't just be a personal gag at a close friend. Penn's immigration joke went out to the whole viewing public — many of whom struggle with immigration status challenges that Iñárritu will not likely face again, if he ever did.

It's not like we haven't been down this road already very recently. The "joke between pals" defense was weak when Daniel Handler tried to play off his racial jokes at Jacqueline Woodson's expense back in November at the National Book Awards, and that was a C-Span event watched by only the nerdiest of the book nerds (my people!). (It must be noted that Woodson did not find Handler's comments "hilarious" and she said so in no uncertain terms in the New York Times.) Private jokes, especially when they toe or cross the line of good taste, have no place on the entertainment industry's public stages. The fans watching at home don't care how "brutal" Iñárritu and Penn are to each other in the privacy of their own parties — they hear those jokes through their own lenses of experience, and for many, Penn's joke was minimizing, humiliating, a way to laughingly put a Mexican-born artist in his place by reminding him he would always be an "other," not one of us. If the Oscars are to inspire fans to continue to go to the movies, Penn's joke reminded them of how out of touch Hollywood is with their concerns. If the ceremony is meant to inspire ambitious young filmmakers, of what are they dreaming now? Of one day being insulted by a colleague as the industry awards him or her its highest honor? So utterly hilarious, on so many counts.