Why do you care whether I'm really gluten intolerant?

Skeptics love to claim the condition is fake. But if simple diet changes help people like me, shouldn't we be glad? 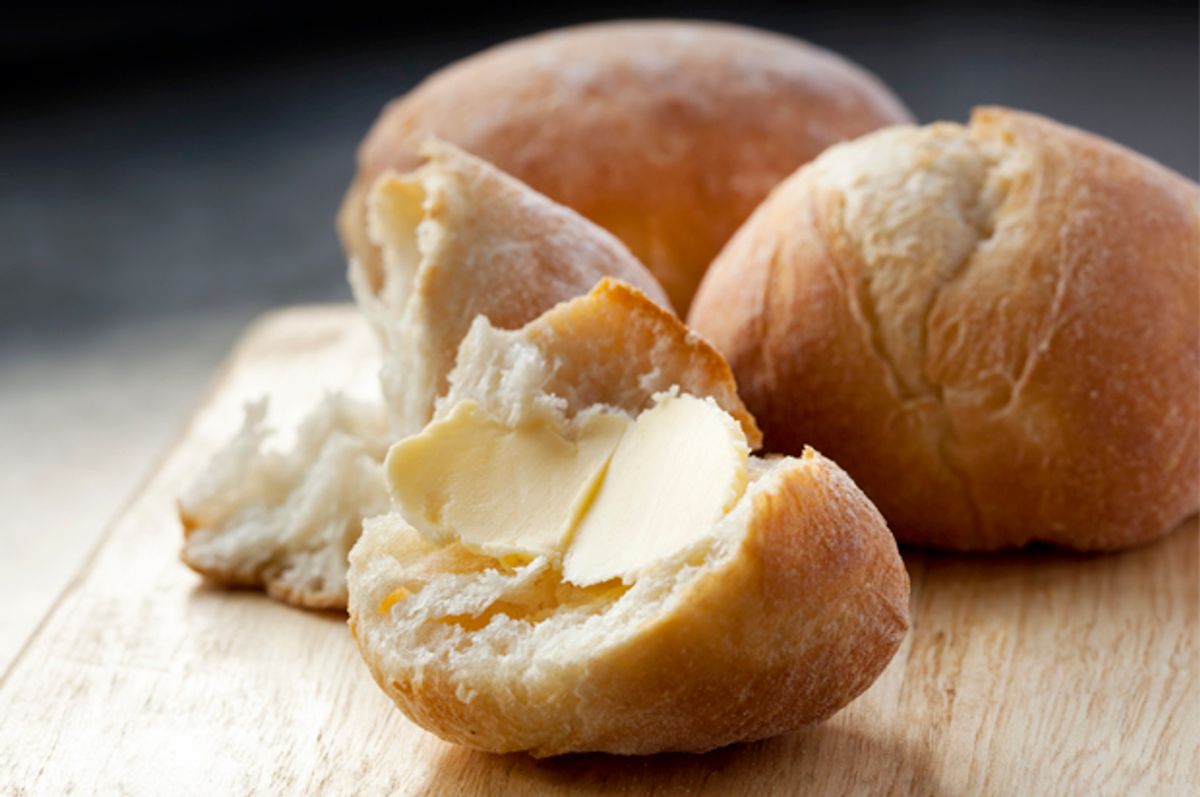 I am one of 18 million Americans who believe that they suffer from a condition that may or may not exist. Like many of them, I am self-diagnosed. I stopped eating gluten about four years ago, when I was 25, but my symptoms began a couple of years before that. Shortly after my father died, I experienced an alarming, precipitous physical decline. My symptoms were manifold. I suffered increased allergies and sinus infections; abdominal pains and digestive problems; bodily aches; asthma; fatigue. Even more disconcertingly, I had trouble thinking clearly, a condition that I was able to overcome only by using an over-the-counter allergy medicine that I later learned contained the same active ingredient as speed.

I had already been diagnosed with lactose intolerance. Now I noticed that wheat seemed to be causing me some of the same problems, too. Not wanting to give up bread as well as cheese, I made an effort to eat healthier, choosing whole grains, fruits and vegetables, minimal meat. The symptoms persisted. I consulted a naturopath, who suggested that I might have celiac disease. I paid more than $200 for a blood test. The results came back negative.

For the next two years I coped using a combination of allergy medicine, caffeine and denial. I finally made the decision to try a gluten-free diet after a long flight during which I consumed several forms of processed wheat—a sandwich at the airport, pretzels on the plane, crackers after I touched down. The next morning I could not breathe. My lungs were tight. My chest hurt. When I pressed my thumb into my stomach, I felt a hard lump of undigested dough.

Was it all in my head? Some would say yes. Despite the ubiquity of gluten-free diets these days, real doubt remains in the minds of many about whether “non-celiac gluten sensitivity” even exists.

Roughly 6 percent of the population (18 million Americans) believe they suffer from gluten intolerance. Another 3 million people (about 1 percent of the population) have celiac disease, a significantly more serious (and less controversial) condition. For the remaining 93 percent of the public, "gluten-free" seems to have become synonymous with upscale foodie fad, a kind of self-diagnosed superiority complex to one of the most staple foodstuffs on earth.

And that was before the news broke that gluten intolerance might not even be real. Back in 2011, Peter Gibson, a professor of gastroenterology at Monash University in Australia, published a study suggesting that gluten, a relatively obscure protein found in wheat, barley and rye, could, in fact, cause gastrointestinal problems in people who did not suffer from celiac disease. (For people with celiac, gluten had been shown to damage the villi in the small intestine, making it difficult for them to absorb the nutrients from food.) Then in 2013, Gibson released the results of a second study that contradicted his first. This new study proposed that “FODMAPs,” a category that included some fruits, vegetables and dairy products along with grains like wheat and rye, could actually be the source of non-celiac sufferers’ pain.

Skeptics of gluten freedom were overjoyed. “You can go ahead and smell your bread and eat it too,” crowed Jennifer Welsh of Business Insider. Michael Specter, writing for the New Yorker, was more circumspect, although his conclusion was much the same. “While there are no scientific data to demonstrate that millions of people have become allergic or intolerant to gluten (or to other wheat proteins),” Specter wrote, “there is convincing and repeated evidence that dietary self-diagnoses are almost always wrong, particularly when the diagnosis extends to most of society.”

On the one hand, Welsh’s assertion was misleading (FODMAPs includes wheat in addition to foods like avocados and asparagus) and Specter’s was a straw man (almost no one argues that most of society should stop eating gluten). On the other, it is true that the number of people who believe they suffer from gluten intolerance has risen inexplicably in recent years.

I was one of them. Was it imagined? Or did I legitimately have an intolerance, an aversion to a protein my Italian and Jewish ancestors had been relying on for generations?

I don’t honestly know. No one does. By the time I decided to try a gluten-free diet, I was almost certainly depressed, not least because of my physical problems. Was it a diet high in FODMAPs that sent me over the edge? Accumulated stress? Inadequately processed grief?

I don’t know. What I do know is that after Googling around the Internet that morning I found several first-person testimonials that described symptoms similar to mine. Bodily aches. Digestive issues. Chronic fatigue. All of the people claimed to suffer from the same condition: gluten intolerance. I decided to give gluten-free a try.

The effects were not immediate. At first I was not even sure what gluten was. Some of the foods I needed to avoid, I learned, were obvious, like bagels and beer, while others, like soy sauce, were not. (Soy, to clear up a common misconception, does not contain gluten, but soy sauce, which is made with wheat, does.) I began reading the labels at grocery stores compulsively. I cooked most meals myself.

As time went on, I did begin to feel better. My stomach didn’t hurt as much. I was able to think more clearly. I felt leaner, less depressed. The gluten-free diet seemed to have worked. And yet even before I learned about Gibson’s second study I felt a certain amount of shame. Some of this was surely self-imposed. As a longtime food service worker, I did not want to burden the people who served me at restaurants; I also did not want to inadvertently pressure my dining companions to conform their culinary decisions to mine.

Some of the embarrassment, however, was a response to the attitudes I encountered. News of my gluten-free diet was met with eye rolls, snickering and blank stares. Gluten intolerance seemed to have the ability to inspire dismissiveness and derision in people who might otherwise have behaved better.

It was with interest then that I came across “Devil’s Bait,” an essay from Leslie Jamison’s recent collection "The Empathy Exams." Jamison’s essay detailed a rare, perhaps fictitious condition called Morgellons disease that was first discovered in 2001. Characterized by “strange fibers emerging from underneath the skin,” Morgellons affects about 12,000 people nationwide. It also may not exist. The most common medical diagnosis for people who believe that they have Morgellons is “delusions of parasitosis.” In other words, doctors believe patients to be hallucinating their symptoms. A study by the Center for Disease Control in 2006 proved inconclusive.

“Morgies,” as they began to call themselves, banded together in response, founding advocacy groups, support networks, and a conference near Austin, Texas, each year for “patients, researchers, and healthcare providers — basically, anyone who gave a damn,” according to Jamison. Intrigued, the author traveled to the annual conference to observe the embattled community. She interviewed attendees, listened to presenters, and examined her own conflicting feelings about the disease. While she was not, in the end, able to suspend her disbelief about the existence of Morgellons itself, she was not willing to discount Morgies’ suffering either. “This is not an essay about whether or not Morgellons disease is real,” she writes. “It’s an essay about what kinds of reality are considered prerequisites for compassion. Is it wrong to call it empathy when you trust the fact of suffering, but not the source?”

Personally, I don't care what Jamison calls it. I am just glad that she is willing to engage with other people’s suffering with so much respect and consideration. I wish that more people would regard those who believe that they have gluten intolerance with the sensitivity with which Jamison approaches Morgellons, whether or not their condition is real. I wish that they would respect the fact of our suffering if not the source.

Some of the skepticism, I suspect, has to do with the suspicion that a group of privileged, self-pampering people has appropriated a legitimate medical condition to require that other people, often in positions of service, provide extra effort and attention. And I am sympathetic to this point-of-view to some extent, particularly its class critique. I have been on the other side of the counter too many times to count. Entitled, oblivious people piss me off, too.

But I suspect that another reason why skeptics have such a hard time empathizing with people who have gluten intolerance is that they, too, are suffering. Jamison writes about how Morgellons disease “offers an explainer, a container, and a community” for people who do not know why they suffer but only that they do. The same is almost certainly true for gluten intolerance. Simply assigning a name to one’s suffering, whether or not it is the correct one, can provide a certain amount of relief.

All of which is to say that I suspect the most strident skeptics of gluten intolerance are suffering and have not yet found a way to talk about their pain. Everyone suffers; it is an inevitable part of our condition. Finding a way to talk about that pain, however, and, crucially, identifying with others whose experiences have been similar, can produce an important ameliorative effect.

My experience with gluten intolerance has led me to believe that doing the hard work of trying to feel better is an ethical imperative almost as great as empathy. In fact, one often leads to the other.

Alex Gallo-Brown is a writer living in Seattle