The endgame to avoid a shutdown is revealing itself. Now Republicans are scrambling to figure out how to spin it 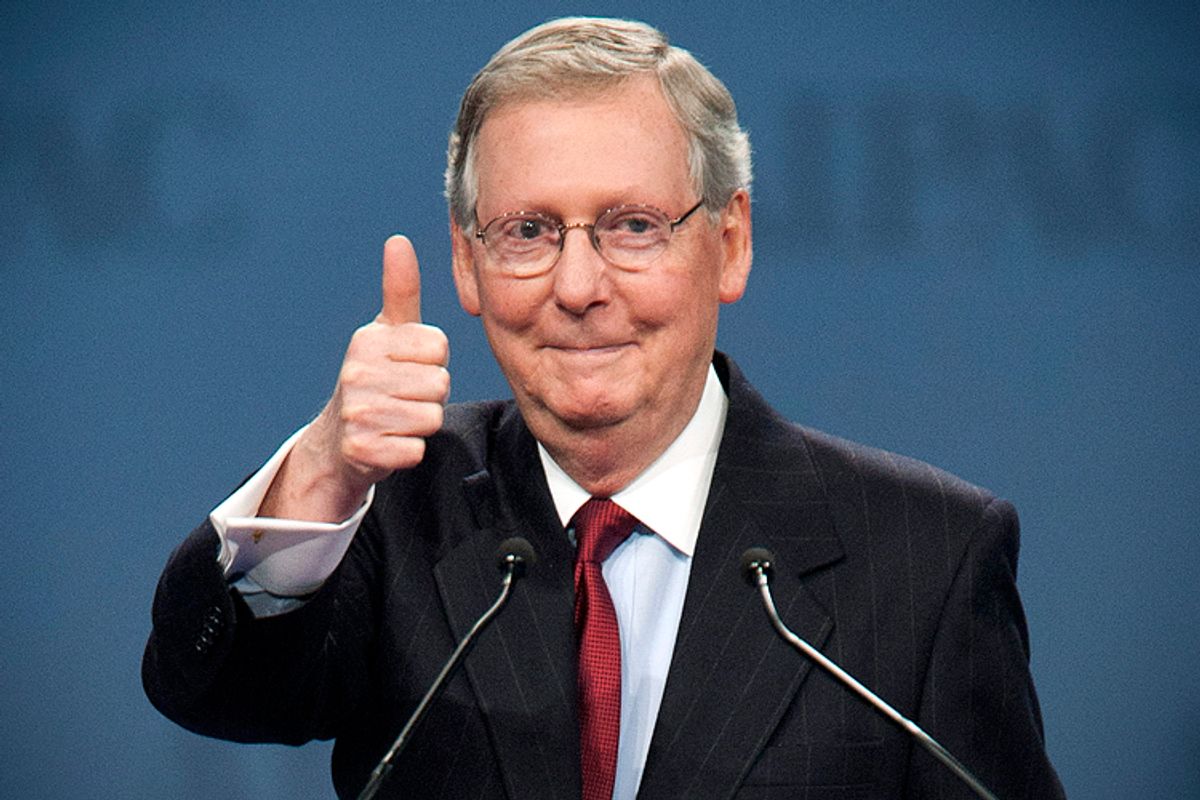 Right on cue, here's Mitch McConnell, prepared to cave on the DHS appropriations fight. Not that he would describe it in quite those terms.

The plan that McConnell announced yesterday evening is more or less the same one that had been floated to The Hill: He will decouple the the riders undoing President Obama's executive actions on deportation from the DHS appropriations bill. There will now, presumably, be two votes: one stand-alone bill eliminating Obama's 2014 executive actions on immigrations -- the provision against the 2012 program, DACA, will be dropped altogether, since they've finally discovered that being mean to children is a bad look -- and then a "clean" bill on DHS funding. The timetable for getting on that "clean" bill is still unclear and may require a brief extension, since there are only four days of funding left and it takes the Senate forever to get a bill to the floor.

We'd keep our mouths shut about how this is a total cave-in from McConnell, but it's obvious enough, and conservatives are already plenty aware. McConnell is ceding the GOP's leverage. It's the only move he's got, since the Democrats' leverage -- that Republicans will be blamed for a shutdown -- is considerably stronger.

How does McConnell intend to wash this down with conservatives? He's settled on a spin. It's not a very good one, but he's not in a very good position, so we'll give him an A for effort. Basically he's going to give Democrats what they want in exchange for the opportunity to call some Democratic senators hypocrites:

"Some Democrats give the impression they want Congress to address the overreach," McConnell said on the Senate floor. "But when they vote, they always seem to have an excuse for supporting actions they once criticized. So I'm going to begin proceedings on targeted legislation that would only address the most recent overreach from November. It isn't tied to DHS funding. It removes their excuse."

In other words: there are about a half-dozen conservative Senate Democrats (and Al Franken?) who've said they didn't approve of Obama addressing deportations through executive action, but they've all voted to filibuster the DHS bill that undid the 2014 actions because they didn't think that it was proper to deal with it through the appropriations process. So McConnell is saying that if they filibuster this stand-alone bill on the 2014 actions, now that it's no longer tied to appropriations, they'll be hypocrites. And we all know that it's impossible for a politician to survive a single accusation of hypocrisy!

The thing is... this doesn't seem like that difficult a "trap" for those Senate Democrats. As we wrote yesterday, they should feel free to vote however they want, because there are no real stakes here. If they want to vote for the stand-alone bill on the executive actions, Obama can just veto it. If they want to vote against it, then fine, Mitch McConnell can run around calling them hypocrites and the world can continue not caring. What's to fear? Joe Manchin, perhaps the most conservative Senate Democrat, is so scared of Mitch McConnell's plan to "trap" him that he's... endorsed Mitch McConnell's plan.

The only real surprise here is that House Speaker John Boehner, for now at least, has thrown his support to McConnell's plan.

A spokesman for House Speaker John Boehner, R-Ohio, welcomed McConnell's move, though without predicting its chances of success in the House.

"This vote will highlight the irresponsible hypocrisy of any Senate Democrat who claims to oppose President Obama's executive overreach on immigration, but refuses to vote to stop it," said Boehner spokesman Michael Steel.

Boehner, like McConnell, isn't acknowledging specifically that the stand-alone vote on the executive actions will be followed by a clean bill on DHS. But unlike McConnell, he presides over the House, where that endgame is going to be much more controversial since House Republicans are insane. It's strange that Boehner would be endorsing a strategy that throws him to the wolves. Does he think that House conservatives will actually buy this spin, that they're getting a victory by caving in and ceding their leverage? A clean bill -- or a clean-ish bill, since they will probably throw a useless protest line in it about how Obama is a jerk -- would pass the House, but perhaps with more Democratic than Republican votes. We'll see how interested John Boehner is in this strategy after right-wing talk-radio has had a day or two to weigh in.