HBO's political call to arms: "Citizenfour" has more in common with "Girls" than you'd think 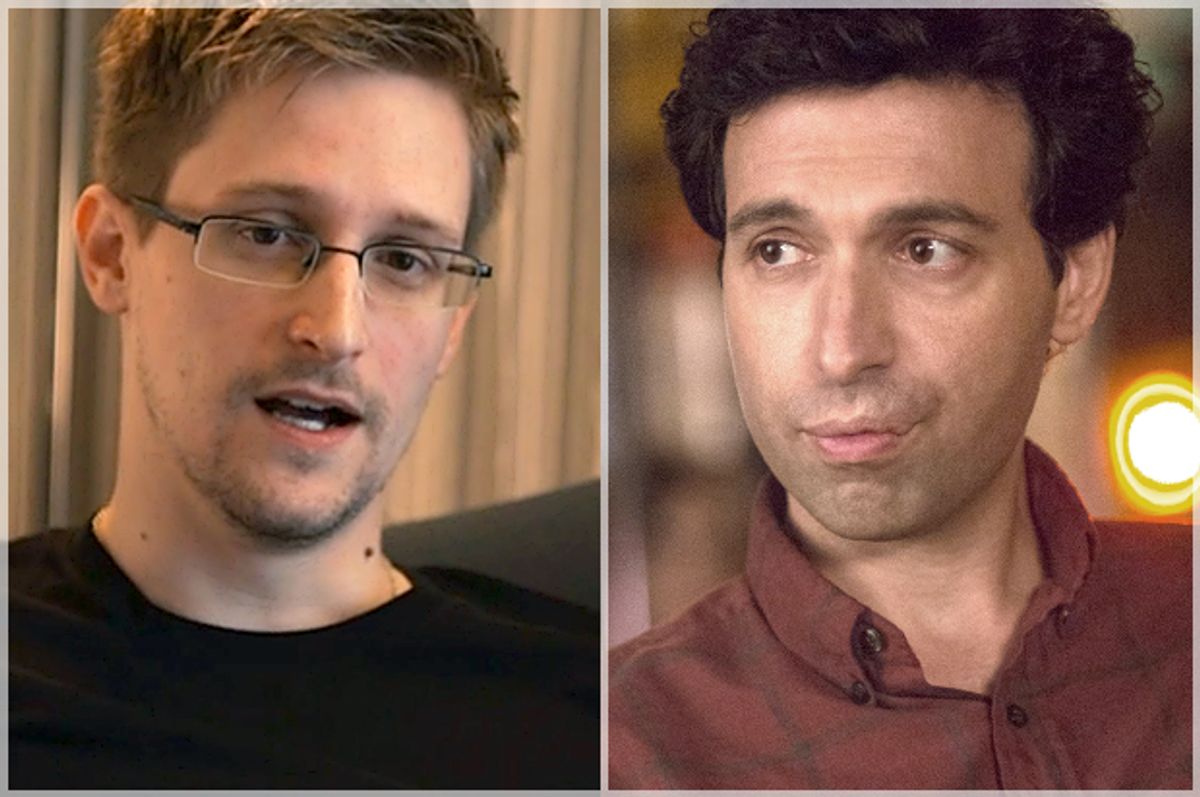 Edward Snowden in "Citizenfour" and Alex Karpovsky in "Girls" (HBO)
--

This has been a big week for the documentary “Citizenfour,” Laura Poitras’ film about how Edward Snowden got in touch with her and blew open a global surveillance conspiracy of staggering proportions, conducted by the U.S. government. On Sunday, the Academy of Motion Picture Arts and Sciences awarded the film an Oscar for best documentary feature; on Monday, the film made its television debut on HBO, its widest release yet.

In some ways, “Citizenfour” is oddly perfunctory. Poitras started filming from the very first time she met Snowden, in a hotel in Hong Kong. The scope of the story is becoming clear to her in real-time; even if you have the foresight to bring a camera to a historical event, it’s hard to know exactly what history is going say about the event. She is largely silent, behind the camera, listening to Greenwald and Snowden hash out a plan for what happens next, watching Snowden do simple things like shave, watch TV and stare out the window, waiting to see if some kind of threat is approaching. She is, sort of, surveilling him—especially in the eight days in June that he is in Hong Kong, publicizing the information that is going to completely change his life and the global news conversation. It is a lot of tense waiting, of not knowing what happens next, of feeling both very plugged into the world and very removed from it, too.

The documentary starts with Poitras’ very first communications with Snowden, who used encryption and digital back channels to contact her. He found her because she was already on a watch list — Poitras had moved to Germany so as to have some more freedom to critique the government’s post-9/11 policies, after, she says, she was being detained at border crossings and even being followed. Snowden used the name “citizenfour,” a choice that is not named in the film, but eventually has fascinating implications for the viewer. If Poitras is one American citizen, Snowden another, and Glenn Greenwald, the other American journalist who met with Snowden, a third, who is the fourth but you, the silent American watching the story unfold?

Poitras, of course, knows exactly what she’s doing. If “Citizenfour” feels limited, it’s because it’s a documentary about the person behind an issue more than the issue itself. Snowden makes for a fascinating portrait—the soft-spoken, handsome systems administrator who is unremarkable except for the information he found and the conscience that drove him to act. Poitras intentionally showcases how much he had to give up and continues to give up in order to have done this thing. He had to cut ties with his entire family, including his partner, Lindsay Mills; his job, his life, his ability to return to the United States, including North Carolina, where he grew up. The documentary ends with a line of white text on a black background, thanking Snowden and everyone else who makes sacrifices in the pursuit of justice. The question hangs in the air, as the credits roll: What have you done lately?

On the night immediately previous, on the same network, HBO showcases three shows about disaffected urbanites who face the same question, and rather than go big—global conspiracy—they are increasingly turning to their own communities to make a difference. I don’t think this is unrelated to the vastness presented in “Citizenfour.” If anything, it seems like this moment’s direct response to the vastness of our problems. I can’t do anything about that, Lena Dunham and Andrew Haigh and the Duplass brothers seem to be saying. But I can do something about this.

The local government story line is most pronounced in “Togetherness,” from Mark and Jay Duplass, where disaffected wife and mother Michelle Pierson (Melanie Lynskey) ends up finding a purpose in an initiative for a new charter school, headed up by a handsome divorced father named David (John Ortiz). The more invested she becomes in this project, the more attracted she becomes to David — a Latino man who might otherwise have never crossed paths with the aggressively yuppie Piersons. As the season continues, the charter school project becomes more and more pronounced, not less; the season finale will take the charter school committee to Sacramento, to make their case to state government.

Once you start noticing the grace notes of civic engagement in “Togetherness,” they become hard to ignore: The fantastic episode from two Sundays ago, “Kick the Can,” is about two different groups of people clashing in a public park; Brett, this past Sunday, had an unexpected encounter in another park; and the catalyst for the Piersons' midlife crisis is a trip to the beach—another locally governed public space. The couple’s isolation is underpinned by how often they show up to communal events but fail to really participate—whether that’s a premiere party, a bar, the beach, or a night out in a restaurant.

Brett’s reaction has been to let the meaninglessness swamp him. Michelle’s has been to try to fight back, and that means making connection happen in an unlikely and maybe even uncomfortable way—Sunday night’s episode has David and Michelle wandering through a nearly abandoned building, scoping it out as a possible site for their school. The treacherous stacks of old school desks and cramped passageways force them closer and closer together. She has to contend with civic engagement and togetherness of a very different kind, and the experience is not totally pleasant.

That’s the thread of “Looking’s" foray into community, too. One of the leads, Agustín (Frankie J. Alvarez), spent the first few episodes in free fall: a post-breakup bender that lands him disoriented on a San Francisco sidewalk. Faced with an existential crisis that has taken his relationship and his career as casualties, he ends up doing admin work for an acquaintance’s organization, a shelter for homeless trans teenagers. Agustín is both repelled by the work and drawn to it, as he is to the acquaintance-turned-friend-turned-maybe-lover, Eddie (Daniel Franzese). Repelled, because it’s complicated, and requires more of him than he’s been willing to give before: The kids need attention constantly, the work is emotionally draining, and Eddie is wary of getting involved with Agustín, as Eddie is HIV-positive.

It’s fraught; here, as in “Togetherness,” the promise of intimacy is laced with danger. And both shows, interestingly, use romance as part of the storytelling of community involvement, whether that’s in the nonprofit world or through local government. Seeking out engagement is a process that functions both communally and personally.

“Girls” didn’t go down that road. Indeed, the process of Ray (Alex Karpovsky) deciding he is going to run for a local political office seems to have been cooked up out of a desire to give Ray something to do. He’s always been the show’s awkwardly older guy; at this point, he is in his early 30s, while the rest of the show’s cast is in their mid-20s. Ray comes to community government after experiencing how ineffective it is for him; and though, yes, his cause is just, it’s also somewhat ridiculously limited—he’s very upset about the loudness of traffic on his street. It is due to a traffic problem that he believes should be easily solvable. In this past Sunday’s episode, “Close Up,” he shows up to the community board hearing in his neighborhood with a 3-D model mapping out the intersection. He is also wearing a suit. And though “Girls” is a comedy—and a deeply amoral comedy, at that—Ray’s adventure to the public meeting telegraphs a certain unfunny faith in the system. It’s kind of touching—he even has a model! He’s really trying!

It’s both difficult to explain the ramifications of Edward Snowden’s whistle-blowing and hard to understate them, too; this is a level of surveillance that deeply infiltrates our increasingly digital lives, but has become a somewhat expected phenomenon, even if its limits are barely known or understood. It’s a story that has the scope that action films aspire to; Snowden is the crypto-spy hero of the modern era. And it feels entirely unreachable. Even to Snowden himself, filmed in his hotel room in “Citizenfour,” the magnitude of what he’s revealed to the public seems beyond his reach.

Pop culture is always eager to make hay out of big global conspiracies; hackers and international airports and press conferences and government corruption. We’ve got everything from James Bond films and “Enemy of the State” to “Allegiance,” “State of Affairs” and “Scandal” on television. But what Poitras does so elegantly is throw out the romanticization and simplification that happens with the splashy, melodramatic action flicks to instead make it a character drama about a real man. And that is, interestingly, what “Girls” is doing too, albeit on a very different scale. The why and what of engaging in politics varies greatly; but the general how is very similar: Someone decides that they are going to show up to the problem.