My week at the "American Sniper" trial: Chris Kyle, two deaths and a Texas town's search for truth

It's a long way from the Oscars, and no sign of Bradley Cooper. But "American Sniper" is the story nevertheless 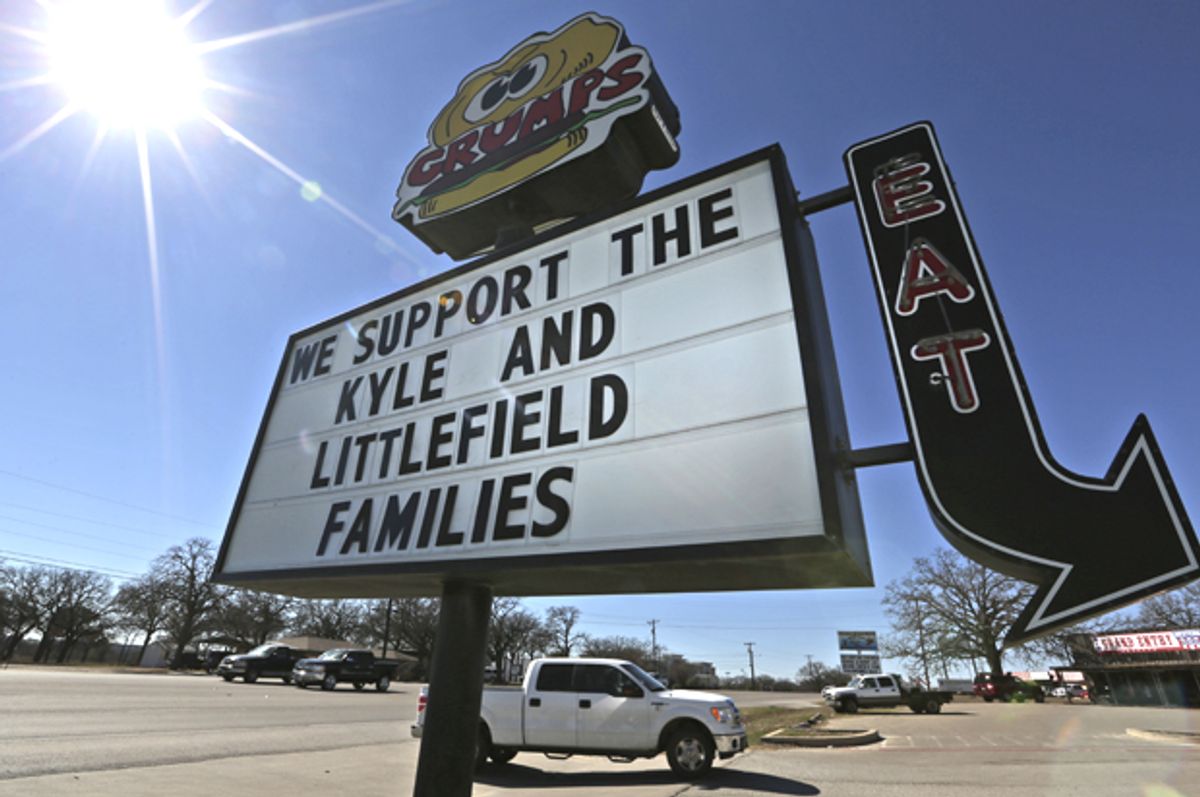 A sign displaying support for the families of Chris Kyle and Chad Littlefield, Feb. 10, 2015, in Stephenville, Texas. (AP/Lm Otero)
--

Kenny Weldon is a rangy man, with limbs in perfect balance as he walks. His close-cropped hair has grayed, but not retreated, and he speaks in full, complete thoughts without breaking eye contact. His favorite movies include "Gettysburg" and "The Cowboys," the 1972 flick where John Wayne trained a bunch of children to become cowboys.

Weldon grew up in Stephenville, Texas, a rural, 19,000-person city that considers itself the “Cowboy Capital of the World.” (Several other communities have also bestowed this crown upon themselves; there seems to be no international governing body that rules on such matters.) He lettered in football, baseball and basketball, and served as the National Honor Society president. In 1981 he left for the Air Force Academy, and a career that would take him to Korea, Hawaii and the Pentagon.

In 2011, he retired, packed up his family, and headed back to Stephenville. Then he was asked to run for mayor.

“When you’re in the military you realize it’s a calling to serve others, especially in our country,” Weldon says from Stephenville City Hall. “So for me, it was a way to come home and continue that service to others, and take a lot of what I had learned in my professional career and apply it to my hometown. You gain all these experiences in different professional settings, and apply it to the betterment of the community.”

The city is home to the Donald R. Jones Justice Center, right off the small, quiet square. And inside the center—across from the public notice for the Texas Boll Weevil Eradication Program, and down the block from the monument to the 1997 National Champion Erath County Dairy Judging Team—sits Eddie Ray Routh, the man accused of murdering U.S. Navy SEAL Chris Kyle and his friend, Chad Littlefield.

On Feb. 2, 2013, Kyle, Littlefield and Routh headed to Rough Creek Lodge, a high-end hunting resort and spa 30 miles east of Stephenville. It’s there that Routh—suffering from PTSD and schizophrenia—shot Kyle and Littlefield dead. Afterward, Routh stole Kyle’s truck, drove to his sister’s house, admitted to the murders, and told his sister "people were sucking his soul," prosecutors say.

The trial began on Feb. 11, turning the town square into a media hub, all satellite trucks and little white tents and cordoned-off streets. Two blocks off the square, though, it’s impossible to tell there’s a capital murder trial in town. Traffic is slow and (as usual) truck-heavy, the sidewalks are empty, and shop owners sit alone at their counters. At Frames Etc—the “etc” stands mostly for a medium-size used bookstore, and some wooden crosses—owners George and Kathy Wooley sat building a set of shelves, while an Ash Wednesday-ashed clerk stocked books.

Customers have slowed to a trickle since the trial started—“folks are avoiding the square,” George says—so much so that one employee asked if the store was going to shut down until the verdict. Before the trial, the shop had a hard time keeping Kyle’s best-selling "American Sniper" on the shelves. A used copy would come in, then be gone before a second could even be stocked.

After Kyle’s murder, a new customer walked into the shop: Deby Lynn, Kyle’s mother. She arrived holding a portrait of her son, painted by local Tarleton State student Blu Dornan. It’s the familiar shot of Kyle—black Craft International hat, taut mouth, beard— with an American flag in the background. And it needed a frame. After she picked up the project—which went on display at the school, which also sits in Stephenville—the entire shop cried.

On the outskirts of town, a sign for Chick Elms Rodeo Shop and Grand Entry Western Store reminds folks to order their Chris Kyle hats. At the front desk, a college-age clerk explains that the shop initially just ordered 12, then had to order another 100, then another 200. Behind the counter, she pulls up the order online, and shows the goods. The HOOey hats come in two designs: light tan camo, and one with alternating black and green camo panels. Each are emblazoned with the skull logo of Kyle’s tactical-training company, Craft International, and the HOOey emblem, an energetic stick figure (and all-around unfortunate juxtaposition on a hat honoring a dead soldier). On the underside of the brim, an American flag and a Kyle quote: “It’s our duty to serve those who serve us.”

In the back of the shop, a cowboy-hatted Chick Elms works on the soles of a pair of black slip-on dress shoes. He’s shaving the sides to even out the right and the left, and Randy Travis’ “Forever and Ever, Amen” drifts over the country radio. He’s surrounded by boots, shoes and saddles, and the workshop smells of leather and cleaning products. A friend sits in the workshop in a Carhartt jacket with a lip full of dip. It’s the textbook ideal of manliness.

Elms explains that the trial’s been somewhat forced onto the town. That’s not a complaint, he says, just reality. People from all over have visited Stephenville since the trial started, including one couple from Tennessee who found their way to Chick’s doorstep.

“They used the excuse that they were in town to see Dwight Yoakam in Fort Worth, but…” Elms cocks his head during the last part of the sentence. His shop is 84 miles from where Yoakam played on Valentine’s Day.

One of his sons just deployed as a helicopter pilot in the Air Force, while another son was injured during battle in Afghanistan. The latter son has kept up with Chris Kyle’s career, read the book, seen the movie. Elms hasn’t read the book, but gets excited when he remembers the grip on his 1911 pistol. He heads to the drawer where he keeps his holstered gun, and unclips it enough to expose the familiar Craft International skull. He has four more sets of them at home.

“[The trial’s] costing a lot of money, money that could’ve gone to schools or roads,” he says. “But I guess it’s a necessity. And of course I’d rather those guys still be here.”

Elsewhere in town, the reminders continue. Outside Grumps Burgers, a sign reads “We Support the Kyle and Littlefield Families.” Near Tarleton State, a billiards hall’s sign flashes “God Bless Chris & Chad...Freedom Is Not Free,” then rotates and reminds students of drink specials and karaoke night. The residents are a typical small-town mix of gregarious but wary. (At City Hall, the front desk clerk happily handed out the mayor’s cellphone number, and the home numbers of each member of the city council are on the city’s website. Near the public restroom, a spreadsheet of city staffers’ favorite cakes is tacked to a cork board. The staffer responsible for baking that cake on the employee’s birthday is the final column.) At the local branch of Disabled American Veterans—a nonprofit that helps veterans receive the medical benefits they deserve—one vet waved off questions, while staffers happily conversed.

“Judge Cashon is a very fair man,” says Veronica Woodward. “When the gavel goes down the last time, justice will be served.” She then doled out restaurant and bar recommendations, unprompted.

Attorneys for Routh tried to have the venue moved, citing all of the usual concerns that come with a jury pool drawn from a small town: Everyone knows everyone, from the victim to the judge. The community was too entangled in the case, the lore (and lure) of Kyle’s life, his death in their county. It’s the kind of community where a slain soldier’s mother takes a portrait of her son to be framed, a three-minute walk away from where his killer would later be tried.

But Judge Jason Cashon disagreed, noting that more than two dozen potential jurors had been dismissed due to their knowledge of the trial.

“A part of the American way of life includes our justice system, which is not perfect, but is the best in the world,” reads a statement from the Kyle family to the Los Angeles Times. “The family has the utmost confidence that a fair and just verdict will result from the upcoming murder trial.”

Back at City Hall, Weldon’s trying to find a room to chat. He doesn’t have his own office in the building; those are reserved for staffers. The conference room is full, and a second option is stacked with boxes. A community services staffer offers to give up his office. After some polite back and forth, the mayor agrees.

Weldon has spent the last months coordinating the Kyle trial: abiding by Cashon’s needs and desires; working with city, county and state departments; ensuring the safety of witnesses, jurors, family members and media. The total bill comes to about $1 million. The efficacy of having bomb-sniffing dogs was proven in late January, when a man contacted the Stephenville Empire-Tribune, telling the newspaper’s managing editor that a bomb would go off during jury selection.

“You always plan for the worst, and hope for the best,” Weldon says, his square-toed cowboy boots hooked together under the table. “It was good to see that play out as well as it did.”

The day before the trial began, Stephenville lost one of its most popular residents, a Japanese-American man by the name of Mike Masuda. During World War II, he and his family were interned along with more than 8,000 others in Jerome, Arkansas, and he later joined the Army, serving as an interpreter for the Military Intelligence Service. The poultry business brought him to Stephenville where, in his retirement, he helped gather and bag old American flags. Every month, at the Turnbow-Higgs American Legion Post 240, he would stand, salute the flag and report on his flag gathering. Upon his death, no less than four remembrances were published in the Empire-Tribune.

Weldon speaks elegiacally about Masuda, a man he’s known since childhood, right here in Stephenville. You could not find a friendlier person, he says, a more loving person. In a city full of cowboys and heroes, in a borrowed office, Weldon sits, thinking about Masuda’s memorial service later that week, preparing for what he’d likely be asked to say.

This is why Kenny Weldon, the keeper of the town’s heroes, was called back home.

Bradford Pearson is a writer living in Dallas. He worked previously for D Magazine, has written for Time and Esquire, and was a 2014 Marshall Memorial fellow. Follow him on Twitter: @bradfordpearson.