"People are really getting angry": How Bernie Sanders just electrified Iowa -- and what it means for '16

At an under-the-radar town hall in Des Moines, Sanders had the crowd begging for more. Here's why it matters 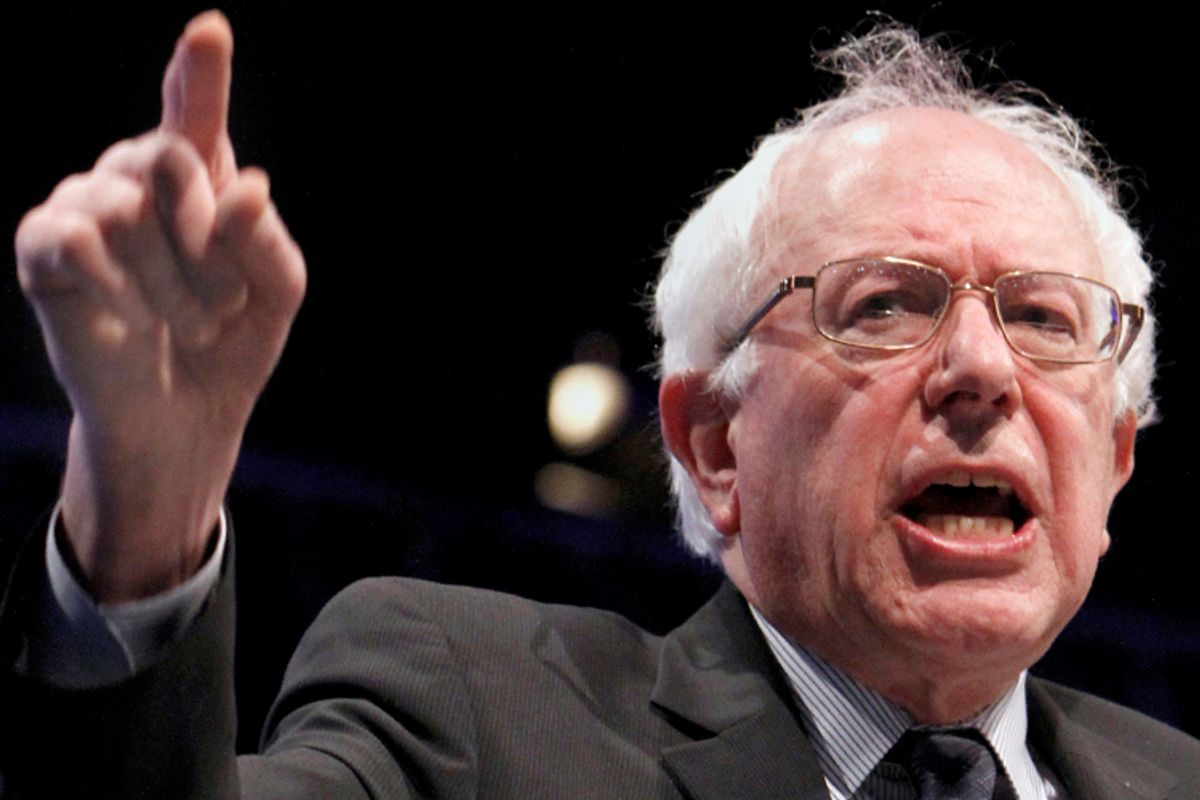 DES MOINES -- Bernie Sanders has neckties older than most of his audience at last Friday's Drake University Town Hall in Des Moines. Yet the age differential didn’t matter. His college-age audience loved him. Organized by Drake progressive students, Sanders and his audience seemed to have a near telepathic connection. His issues are their issues, and if anything, they are more pissed off than he is.

Several Drake students set the stage for Sanders in brief topical introductions, laying waste to money in politics, Citizens United specifically, the reality and dangers of climate change, the importance of pay equity for women, immigration reform, and the crushing burden of the cost of college and debt. Then Bernie nailed it, touching on all of these topics and more.

Unlike the speeches at the recent Republican Iowa Freedom Summit, Sanders was long on ideas, and short on chest-thumping, fiery rhetoric. He also didn’t have an audience mostly old enough to vote when Ronald Reagan was running for president.

At first it was unclear who the bigger enemy of the people were to Sanders -- the Kardashians or the Koch brothers.  The Kardashians, or rather our public fascination with them, represents America’s apathy. Sanders was clear that nothing progressive can happen until people start paying attention.  Sanders told his audience that Americans are getting screwed, and that we had better pay attention and get off our asses.

According to Sanders, our government is bought and paid for by the Koch brothers, and we are living in an oligarchy. He illustrated the point by reminding us of the recent announcement that the Kochs plan to spend $900 million on the next presidential election, when Obama and Romney each spent approximately $1 billion in 2012.  He feels that soon, they will have more power than either the Democratic or Republican parties, just because of their wealth and the leverage the 5-4 Supreme Court Citizens United decision gave them and other billionaires.

The question and answer session took an interesting turn when a stocky young man with the voice of a broadcasting major asked Sanders, “Will you run for president in 2016?”

If he had asked, “Are you going to run…” Sanders might have responded differently. “I don’t know yet,” would have been a good answer. But since he was asked, “Will you run…” Sanders apparently heard it as a request for him to run.

Hands continued to be raised, and Sanders pushed the question with each of them. Is the support out there for a progressive candidate? One man said, “I think people are ready for a champion...if you are a champion for our issues, people will follow you.” One woman had driven four hours to see Sanders, and assured him the support is there. One by one all agreed that they would support a progressive candidate.

My own assessment is a slightly more guarded yes. Currently a purple state, Iowa has deep progressive roots. Not many states match its history on civil rights. Early in our history we granted assistance to those fleeing slavery, enacted some of the nation’s earliest civil rights laws and were one of the first states that allowed unmarried women to own property. In addition, the University of Iowa was the first state university in the nation to open its degree programs to women, and Iowa was the first state in the nation to elect a woman to a public office, and allow women to belong to the bar association. More recently, Iowa was among the first states to allow gay marriage.

And of course, Barack Obama -- seemingly more progressive as a candidate than he turned out to be as president -- won the Iowa caucuses in 2008.

Iowa’s early settlers focused on education, and as a result, we have a higher education system that provides a great starting point for any progressive candidate. Iowa has three state universities, and few, if any, other states have as many private colleges per capita. Drake is one of them, and there are 24 others. Sanders is doing it right. His visits over the past few days have included Iowa City, the home of the University of Iowa, and Story County, the home of Iowa State University, as well as Drake.

Sanders is making the case for change, saying that while most Republicans are working to increase tax breaks for the wealthy and large corporations, they deny the role humans play in climate change, and are working to cut Social Security, medicare, Pell grants and nutrition programs. His audience knows this -- they share his perspective that the Republican Party and billionaires are destroying our country.

There was an energy in the room that constituted a shared vision, and a mission to bring about change. While it was clear that Sanders wants a progressive president, it was equally clear that he is reluctant to seek the nomination. I have no doubt that everyone who spoke at the Republican Iowa Freedom Summit wanted to be president. I think Sanders would be happy if someone else took on the progressive mantle, and led the fight for change.

Sanders spoke of the enormousness of the task to take on big money and bad ideas.

However, Sanders added, there is one place where we have not gained -- but lost -- ground: the economic struggle. He says we need to bridge that income gap, where working families can earn a decent living, where healthcare is a right, where students can afford an education no matter how much money their parents have, and where we don’t have people living on the street.

Bernie Sanders is not only a reluctant candidate, but an unlikely one. The self-described democratic socialist may drive other candidates to the left, and that may be his goal. I suspect that should he choose to run, however, that no matter the inherent value of his ideas, he will be tarred with the “socialist” brush by his opposition somewhere during the campaign. The problem here is that the Tea Party pejorative “socialist” will be used and interpreted by an American public who hates “socialism,” without even knowing what the word means.

The question is whether Iowa, for all its proud progressive tradition, will give a candidate like Sanders a real look in the 2016 caucuses. His town hall on Friday was a positive start.