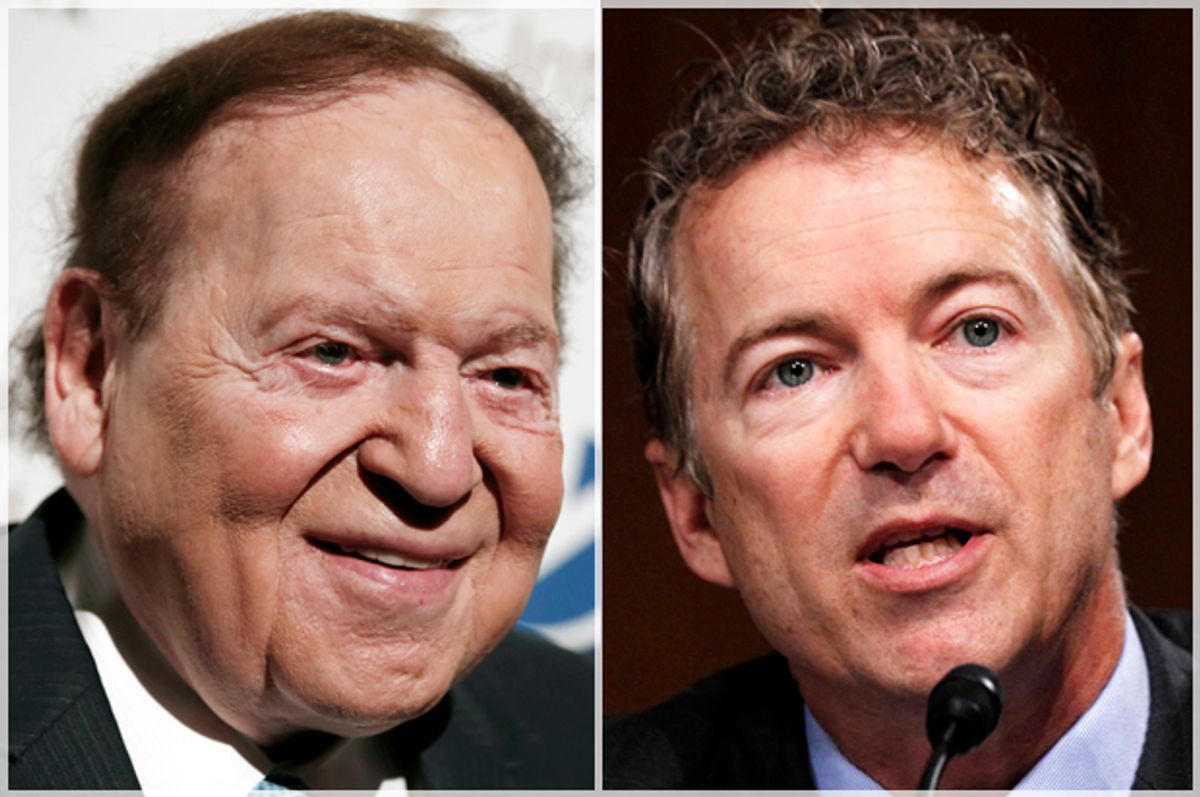 Casino magnate and Republican megadonor Sheldon Adelson, one of the GOP's most forceful advocates for a hawkish foreign policy, is willing to fund an effort to stop Rand Paul from securing the party's presidential nomination, should the libertarian-leaning Kentucky senator's campaign pick up steam.

The revelation comes in a New York Times analysis of the GOP's internal divisions over foreign policy heading into next year's campaign. The rise of the Islamic State militant group has reinvigorated interventionists like Sen. Lindsey Graham (R-SC) and Marco Rubio (R-FL), both of whom would make national security and global affairs central themes of their presidential campaigns, should they run. Meanwhile, Paul is coming under withering intra-party criticism due to his general reluctance to support military force and his backing for the Obama administration's positions on the Iranian nuclear negotiations and the diplomatic rapprochement with Cuba.

“The guy who’s now got the biggest challenge because of this is Rand Paul,” former House Speaker Newt Gingrich, told the Times, speaking of the GOP's increased attention to foreign policy. “The Rand Paul worldview, which I suspect will change, is just incompatible with reality.”

While it remains to be seen how Paul's all-but-certain campaign will perform, Adelson is telling associates that he'll bankroll an effort to thwart the senator should he come within reach of securing the party's nod, the paper reports.

Though Adelson has yet to back a 2016 candidate, GOP hopefuls are vying assiduously to secure his support in next year's contest. Scott Walker, Jeb Bush, Chris Christie, Marco Rubio, Mike Huckabee, and John Kasich have all made sojourns to Las Vegas to curry favor with Adelson, who contributed $150 million to Republican candidates and outside groups during the 2012 campaign. Adelson backed Gingrich in that year's GOP primaries, pouring $15 million into his campaign. While Gingrich lost the nomination to Mitt Romney, Adelson's contributions kept Gingrich's campaign afloat far longer than it would otherwise have remained above water.