Your HR department doesn't give a damn: How corporate overseers exploit American workers

Workers are now managed like any other form of resource, and things have only gotten worse since the recession 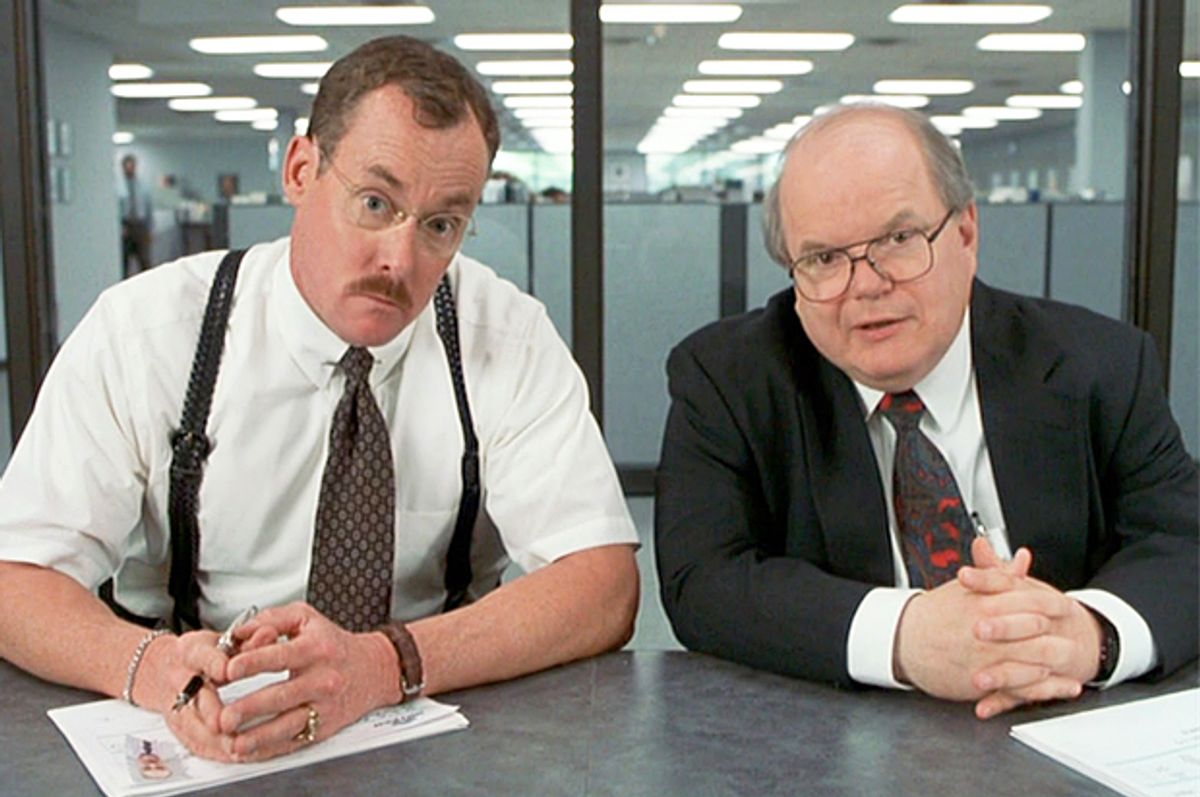 For most of the 20th century, corporations got along just fine without human resources departments. Instead, they had personnel managers who found new employees and handled the welfare of those on payroll. Personnel managers were pretty low on the corporate totem pole, quietly administering a multitude of banal tasks.

But something began to change in the 1980s. With the arrival of globalization and the Information Age, corporate stability gave way to rapid, unpredictable change. Corporations no longer saw workers as loyal partners and creative beings in a productive enterprise. Instead, they became commoditized assets on a balance sheet to be acquired and discarded to suit changing fortunes.

Meanwhile, corporations began to see the term “personnel” as synonymous with the support of employees and new workplace efficiency techniques such as Six Sigma created a need for corporate compliance overseers. So, those who were once responsible for advocating for employees were now embedded with management, becoming cold wardens of the workplace.

The rebranding of "personnel" to “human resources” signaled that employees were now resources to be managed like any other capital, such as finances, office equipment and property. Like a copy machine, it suggested that humans were to be used as much as possible and discarded when they wore out or their usefulness came to an end.

Corporate executives claim these changes were meant to encourage employees to see themselves as free agents, entrepreneurs who are expected to adapt and grow, eventually moving up the ladder or moving on to work elsewhere. Aggressiveness is rewarded, while contentment is frowned upon.

Eventually, the power given to human resources executives proved to be intoxicating, as these bureaucrats started seeing themselves as masters at the top of the corporate food chain.

“As HR leaders we feel ourselves to be near the pinnacle of the organization,” wrote J. Craig Mundy, a HR executive at Ingersoll Rand. “The organization reports to us. It must meet our demands for information, documents, numbers.”

The aftermath of the Great Recession has only amplified the influence of HR departments on corporate culture. As human resources departments produce nothing (besides red tape), they’re not what one would consider a profit center. So, as companies tightened their belts and scaled back, it became HR’s role to find new ways to help squeeze more out of employees while keeping wages low.

One tool used by human resources professionals is the open manipulation of “workplace culture.” Employees are expected to follow cultural cues from HR departments, which model how they want employees to act to create a “positive work environment.” And you better like the culture HR creates for you, or else.

As one seasoned Silicon Valley software engineer told us, “Our HR department doesn’t quite get ‘geek culture,’ but they try to forcefeed us activities, policies and benefits that fit this vision they have. Without asking us, they changed the lighting and workstations because it looked like a set they saw in a movie about hackers or something.”

The software engineer told us his HR department does not engage in two-way communications with employees. Instead, it issues directives on a regular basis, and this has spread a negative feeling throughout the company. He says HR’s interference regarding workplace culture also confuses vendors and consultants, making external work relationships more difficult.

Manipulating a corporation’s culture by human resources is becoming more common in recent years. It’s implicitly done to weed out undesirable employees and attract new employees who are perceived to be a better fit, and could possibly be hired at lower salaries.

Employees viewed as not adapting to changes in the workplace tend to identify as disillusioned to their managers and human resources personnel, which may precipitate their eventual departure. As a company pivots its business strategy, it’s human resources’ job to retain only those employees they believe will help the company reach its goals.

Many of the employees identified as undesirable are often “older” workers. A New York-based media company recently shed itself of many of its long-time employees as it attempted to move away from print and focus on digital products. Most of those laid off, fired or forced to resign were over 50 years of age.

“New management came in and insisted on digitally savvy people,” said a former editor. “People who had been getting good performance reviews for years were suddenly obsolete. They assumed that if you started your career when we used typewriters, you’re probably not a good fit for the digital newsroom.”

Employees at the media organization claim that co-workers were let go for trumped-up reasons. Some believe that human resources workers looked at factors other than performance, including salary, health and activities outside the workplace. Employees claim that their managers excused themselves for giving less satisfactory reviews than in the past, saying they were acting under new performance guidelines set up by HR.

Such stories are not unique. Donna Ballman, a Florida employment lawyer and author of the book, Stand Up For Yourself Without Getting Fired: Resolve Workplace Crises Before You Quit, Get Axed or Sue the Bastards says it's one of the more common strategies used to get rid of older employees.

“If, after years of great performance reviews, you’re getting reprimanded for things everyone does, or being nitpicked for things the company didn’t care about before, it’s possible that the company is gearing up for what I call the ‘suddenly stupid defense.’ They’re building a case to get rid of you for poor performance – trying to show a ‘legitimate reason’ other than age for firing you. If you’re being targeted for write-ups when younger employees do the same things and aren’t written up, you may have an age discrimination claim.”

But if you think unfairly fired employees can easily correct such injustices, think again. Wrongful dismissal lawsuits are difficult to prove and expensive. Moreover, those seven-figure lawsuits you read about are less than a 10th of a percent of the cases that come to court. A typical successful wrongful termination lawsuit in New York, for example, yields only about 18-24 months of pay and benefits.

A common complaint by corporate workers is that documents they’re required to file to monitor productivity interfere with the work day and impede creativity. One popular “workflow” document can take an employee several hours a week to prepare.

This formalizing of mundane tasks is an attempt to ensure compliance by human resources departments that's doomed to backfire.

“There’s no place for a genius whose capabilities will shake things up and reset a company’s course,” says Dave Logan of CBS MoneyWatch. “The mediocrity pandemic starts with an important goal: the desire to formalize things, establish common practices and make sure everything is orderly.”

It can easily get out of hand, says Logan, destroying innovation and “ensuring that the company will be very well managed as it disappears into irrelevancy.”

The unfortunate irony with formalizing the workplace through hyper-documentation is that it demonstrates that human resources, the department that should be advocating for workers, doesn’t really trust them. Additionally, in monitoring workplace efficiency, it creates so much “busy work” it actually impedes productivity.

Human resources departments are also active in redesigning the work environment to improve teamwork and efficiency. The open-office model, where workers do not have the privacy of solid walls and doors, is now used in more than two thirds of U.S. offices. HR departments say it promotes transparency and fairness in the workplace, but workers say that working in open spaces creates too many distractions and makes them less productive. And there’s no evidence that colleague interaction, the biggest excuse used by HR departments for creating open-office floor plans, improves when desks lack walls.

Open offices create stress among workers. Feeling that they can be watched at any time by managers on the floor, workers are forced to constantly to adjust their own behavior. In fact, the open office concept often resembles the prison panopticon design, which allows a single watchman to observe and control many inmates.

It’s not only employees who think HR departments have overstepped their importance; a growing chorus of business executives say it’s time to rethink the monster they unleashed.

Corporate executives complain that human resources personnel have manipulated and interfered in hiring decisions, even going as far as hiding or rejecting desirable candidates. A CEO of a mid-size corporation told MoneyWatch’s Logan that he couldn’t hire a highly recommended candidate because his human resources department wouldn’t go along with his recommendation.

“The candidate is a true genius — with an IQ several deviations above average,” reports Logan. “The CEO liked the person — a lot — and felt he would be uniquely valuable to the company. But the SVP of HR said the hire was risky, that it would send the wrong message to employees, and that the candidate would not make a good fit.”

The CEO admitted to Logan that he didn’t feel it was right to undercut his human resources department by hiring this employee.

The Wall Street Journal reports that some fed-up executives are fighting back, even firing their human resources departments. And they’re using tools such as outsourcing and automation to compensate for eliminating HR positions.

“Executives say that the traditional HR department—which claims dominion over everything from hiring and firing to maintaining workplace diversity—stifles innovation and bogs down businesses with inefficient policies and processes,” says the WSJ report. “At the same time, a booming HR software industry has made it easier than ever to automate or outsource personnel-related functions such as payroll and benefits administration.”

Other companies are downsizing or reducing the influence of human resources on their corporate culture. Many companies are rebranding their HR departments, calling them “talent management” or “talent leadership” departments instead. Better yet, some companies prefer to call the department “Personnel” once again. Opting for less dehumanizing terms is a good start, and hopefully more corporations will find that treating workers as creative, social individuals instead of disposable assets can still be great for their bottom line.