GOP governor has a plan for defeating terrorism -- well, not so much a "plan" as a really manly slogan 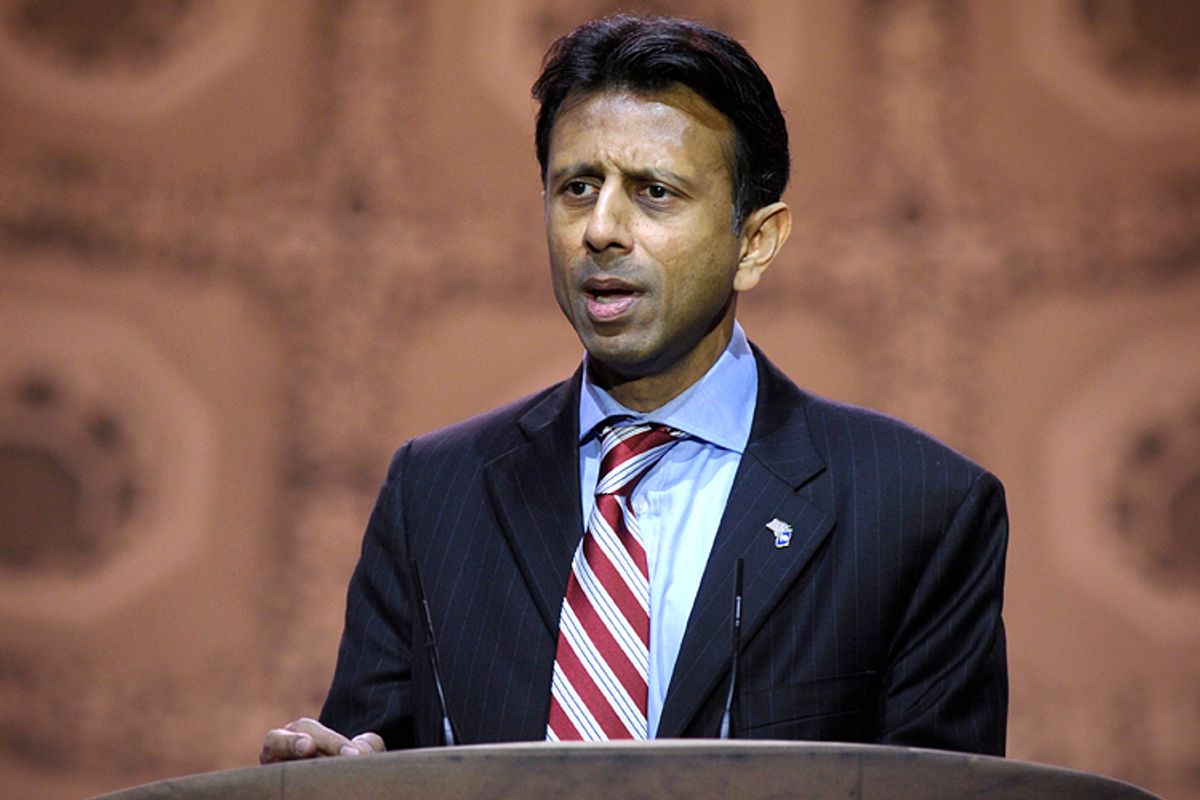 A few months ago, Louisiana governor and beefcake slab of manly power Bobby Jindal did what every wannabe president does – he gave The Big Speech that lays out his foreign policy “vision.” Jindal’s vision for the United States’ role in world (crafted in consultation with neocon human Q-tip John Bolton) was a mish-mash of hawkish slogans that studiously avoided taking a position on anything beyond the need for a vastly larger military budget and the willingness to use troops and/or bombs to resolve conflicts abroad. But he sure was adamant that everything President Obama does is wrong and it can all be fixed with a president who isn’t afraid to LEAD.

But that was back in October – one might think that Jindal has had some time since then to digest the various issues confronting the U.S. abroad and cobble together a semi-reasonable platform that incorporates a well-considered and coherent critique of the president’s foreign policy.

Yesterday, Jindal tweeted out his strategy for taking on terrorism: “Defeat the terrorists.”

It’s devilishly simplistic – the earnest, real-world version of “Someone Should Do Something About All The Problems.” There are terrorists out there? Let’s defeat ‘em! Boom. Done. How has no one thought of that already?

Now, you might object to me mocking this – it is, after all, only a tweet, and Twitter is not the medium for laying out complex strategies for dealing with hostile non-state actors. But, alas, “defeat the terrorists” is Bobby Jindal’s full and complete strategy for combatting terrorism. In a Fox News Op-Ed published on Monday, Jindal objected to the Authorization for Use of Military Force proposed by the White House, arguing that Congress should remove any restrictions on the president’s ability to combat the Islamic State:

The president’s prohibition on ground troops is not a military strategy, it is a political strategy designed to appease the left in this country, which also happens to populate his entire administration.  The prohibition is designed by the left to be a check on the next president.

The mission for our military should be clear – defeat the terrorists. Instead, the president is forecasting our playbook to ISIS.

“Defeat the terrorists” is not an especially clear strategy either. It’s actually deliberately vague, but it also sounds very commander-in-chief-ish, so it accomplishes precisely what Jindal decries about Obama’s strategy: it appeals to his party’s hawkish conservative base. Personally, I’d be very interested to hear a few specifics from Jindal as to what “defeat the terrorists” entails, given that we’ve been pursuing some variant of that strategy for almost 14 years now and at great cost, only to see terrorism stubbornly undefeated. But Jindal doesn’t do specifics. His plan is to just turn things over to the military and let them call the shots: “The military must be given the mission, and they should then propose the specific tactics. If that includes some use of ground troops, then that’s what has to be done.”

The other political aspect to “defeat the terrorists” is its implication that President Obama is not, in fact, enthusiastic about defeating terrorists. And Jindal, like pretty much everyone else in conservative politics, argues that Obama won’t ever be able to truly conquer terrorism because he doesn’t say “radical Islam” enough. In fact, Jindal seems to believe that a hesitancy to sandwich the words “radical” and “Islam” together should preclude Obama from actually being president:

“The president has really disqualified himself to be our commander-in-chief,” Mr. Jindal said, adding that the president had both failed to identify the threat radical Islam poses to the U.S. and failed to take the steps necessary to tackle the threat.

“There are many of us that are very concerned about the president’s unwillingness to call out radical Islamic terrorism and the threat that we face as a country,” he said, speaking after a meeting of the National Governors Association at the White House.

So Jindal is criticizing the president for not taking the steps necessary to fight terrorism, but he won’t actually lay out what the correct steps are. The only specific policy he endorses is that the president say “radical Islam” as many times as is necessary to bring about the conditions for total victory. In one breath he says Obama is “disqualified” to be commander-in-chief, and in the next he demands that Congress authorize Obama to do basically whatever he wants as commander-in-chief. He attacks the president for letting politics infect his foreign policy decision-making, while simultaneously adhering to a foreign policy platform consisting mainly of vacant slogans aimed squarely at the GOP base.

It’s completely incoherent, but it sounds really tough and strong, and that’s all you really need to do to be taken seriously as a Republican presidential candidate.