"Moments that will be awkward": Right-wing lunatics gun for Jeb at nutty confab

Instead of just giving boring speeches, prez hopefuls like Jeb will now have to field crazy questions. Like these! 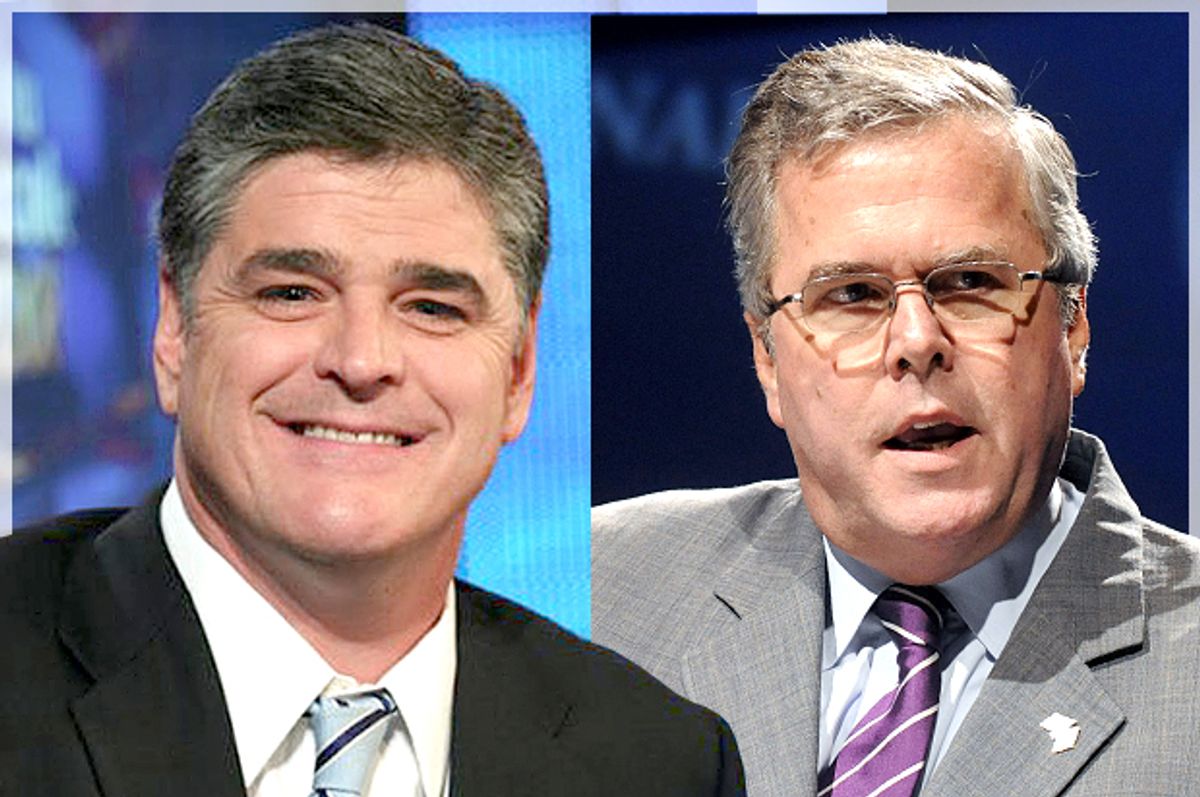 The frigid Washington, D.C., metropolitan area is going to get a blast of hot air this week as the annual Conservative Political Action Conference begins. This is the big one, where every conservative entertainer/politician descends on the fake shopping town of National Harbor, Maryland, to give the same speech about how Barack Obama sucks. Hundreds and hundreds of pathetic political reporters, myself included, inexplicably make the choice to go cover it year after year instead of just watching it on CSPAN, because sometimes there are weird parties afterward. On the last day there is a straw poll that Rand Paul wins.

Over three days, 75 or a million or so jokers all get up and give the exact same speech. They open with the same joke. Some years it's about teleprompters, because Barack Obama frequently uses teleprompters during his speeches. One year it was about how the White House was cutting back on public tours, because that three-day news cycle happened to overlap with the conference; another time it was something about how the IRS was auditing conservatives in attendance. This year I'm guessing The Joke will incorporate as source material Barack Obama's reluctance to use the term "Islamic terrorism." The rest of the speech will also be about Barack Obama's reluctance to use the term "Islamic terrorism." This is the speech that everyone will give.

It gets repetitive. Usually my day at CPAC involves checking in at about 8 a.m. and going straight to the bar. I watch two to three speeches and then exit the conference center and walk into oncoming traffic. The hospitalization gets me out of about four hours of work and then I wheel myself back to the bar and then go home, go to bed, get up and do it all over again.

The American Conservative Union, which puts on the event, may have finally recognized the tedium of an uninterrupted procession of repetitive red-meat speeches. So, bless them, they've added some spice to the mix this year to make things more worthwhile for the paying customers. (It's true: Outside of the media, there are real-life humans who pay actual American dollars to go to this thing. They travel for it. It is their vacation!)

This year, every speaker who's considering a run for president will have to answer questions from the audience. "The horde of likely presidential contenders expected at this year’s Conservative Political Action Conference," Politico reported late last month, "will be asked to deliver speeches about specific policy issues — rather than campaign-style stemwinders — and they’ll also face audience questions."

This is a great change. Cheers! We'll see how difficult the questions become. The ACU says it may pre-screen questions -- basically it wants to prevent each and every Q&A session from being taken over by the college libertarians that Rand Paul groups bus in to ask about chemtrails.

“If you’re running for president and appearing at CPAC, you’ll have to answer some tough questions not given to you ahead of time,” said Matt Schlapp, the chairman of the American Conservative Union, which hosts the event.

He said that at this point he couldn’t answer whether the organization would prescreen the questions posed to speakers but acknowledged that the unscripted moments could lead to some discomfort. On areas such as national security, drug policy, immigration and others, many of the speakers’ views differ significantly, he noted.

“In the course of having that conversation, there are moments that will be awkward,” Schlapp said.

Speakers even have a choice for how awkward they'd like to make it on themselves. If they'd prefer, they can eschew the speech altogether and just do 20 minutes of Q&A. Yikes! One candidate who's surprisingly taken them up on that offer is Jeb Bush, King of the RINO establishment devils. Yup: Jeb Bush spending 20 minutes taking questions from foot soldiers in the conservative movement.

Is Jeb Bush on drugs? Why would he choose this? One suspicion is that the delivery of Bush's set pieces, so far, have been uncomfortable and hurried, whereas he settles down nicely during Q&As. Sure. But this won't be a Q&A at the friendly confines of the "Wall Street Journal CEO Council" or the Plutocrat McSnootybutts' Private Economicks Clubbe. These are not his people. Jeb will want to talk about South Asian trade routes or an interesting new study on kidneys, but the first "question" will be Brent Bozell in his underpants shouting "U DID BENGHAZI!!!!!!!!!!" (Just kidding. For Jeb, at least, it will be Sean Hannity in his underpants shouting "U DID BENGHAZI!!!!!!!")

So give Jeb some credit for making the bold choice to throw himself out there. Let's hope everyone else follows his lead, for comedy.