"Current theory is for a limit to how fast a black hole can grow, but this black hole is too large for that theory" 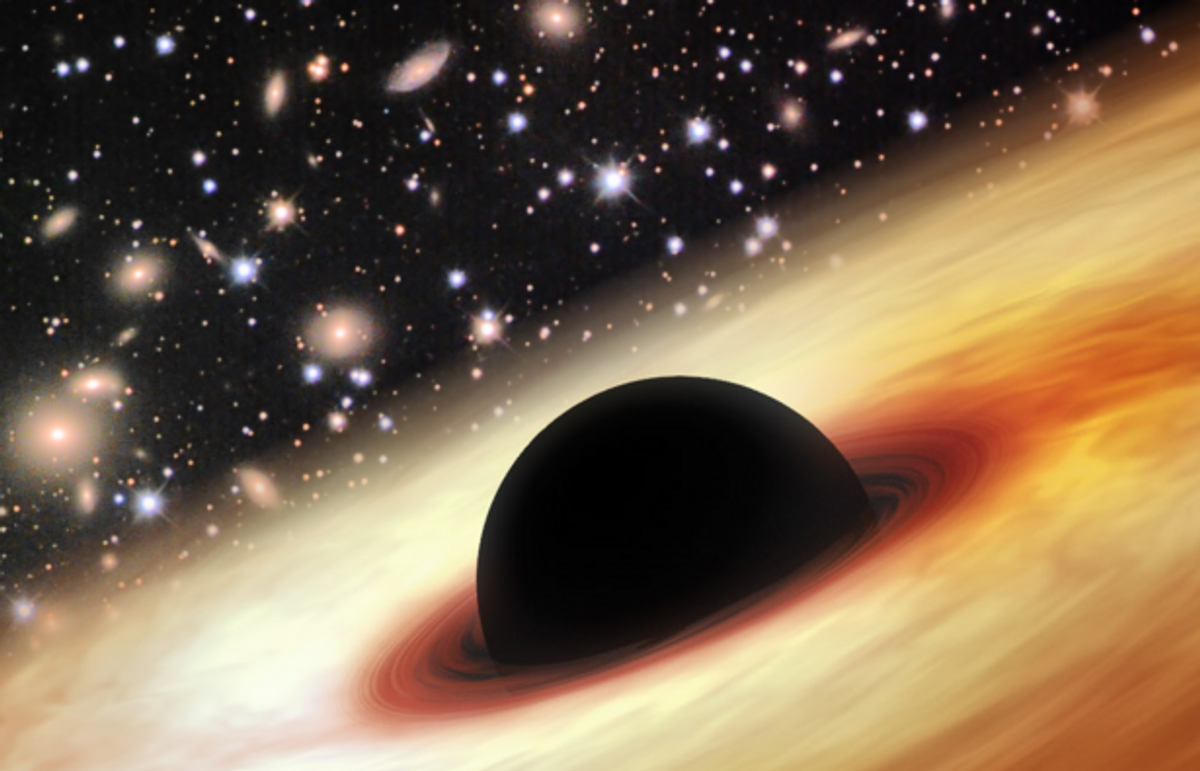 "An artist's impression of a quasar with a supermassive black hole in the distant universe," from the University of Arizona (Zhaoyu Li/NASA/JPL-Caltech/Misti Mountain Observatory)
--

Researchers from Peking University and the University of Arizona discovered what is being called a "monster black hole," which is powering the brightest quasar yet found. Results of the study will be published on February 26 in the journal Nature.

According to NASA quasars are thought to be the furthest celestial objects detectable (thus far) in the universe. "Quasars give off enormous amounts of energy - they can be a trillion times brighter than the Sun!" NASA explains. "Quasars are believed to produce their energy from massive black holes in the center of the galaxies in which the quasars are located. Because quasars are so bright, they drown out the light from all the other stars in the same galaxy."

This recently discovered quasar, which is named SDSS J0100+2802, is believed to have evolved only 900 million years post-Big Bang, and the black hole at its center is thought to be the largest black hole to develop during this early history of our universe.

The quasar and black hole at its center are 12.8 billion light-years from Earth. The mass of the black hole is "12 billion solar masses," and the quasar has the "luminosity of 420 trillion suns," according to the University of Arizona. To put that in perspective, a black hole in our Milky Way galaxy is only 4 million time larger than the sun.

The black hole center of SDSS J0100+2802 is an important find, because its extraordinary size flies in the face of what scientists previously thought about black hole growth during this time period in our universe's history.

Dr. Fuyan Bian from the Research School of Astronomy and Astrophysics at the Australian National University told Reuters: "Based on previous research, this is the largest black hole found for that period of time."

"Current theory is for a limit to how fast a black hole can grow," Bian told Reuters. "But this black hole is too large for that theory."

Scientists believe that the quasar originated near the end of the dawn of the universe or a time known as the "epoch of reionization."

Despite the extreme luminosity of quasars, they're not visible to the naked eye due to how far they are from Earth. SDSS J0100+2802 was discovered by graduate student Feige Wang in Yunnan, China using a 2.4-meter Lijiang Telescope. Following the discovery two Large Binocular Telescopes in southern Arizona determined the mass of the black hole.

Scientists hope that this quasar will help them learn more about supermassive black holes and about the early beginnings of the universe.

"How can a quasar so luminous, and a black hole so massive, form so early in the history of the universe, at an era soon after the earliest stars and galaxies have just emerged?" said Xiaohui Fan, co-author of the study and Regents' Professor of Astronomy at the UA's Steward Observatory. "And what is the relationship between this monster black hole and its surrounding environment, including its host galaxy?"

"This ultraluminous quasar with its supermassive black hole provides a unique laboratory to the study of the mass assembly and galaxy formation around the most massive black holes in the early universe," Fan continued.