"I like skinny white chicks": Kid Rock explains why he doesn't like Beyonce in utterly demented Rolling Stone interview 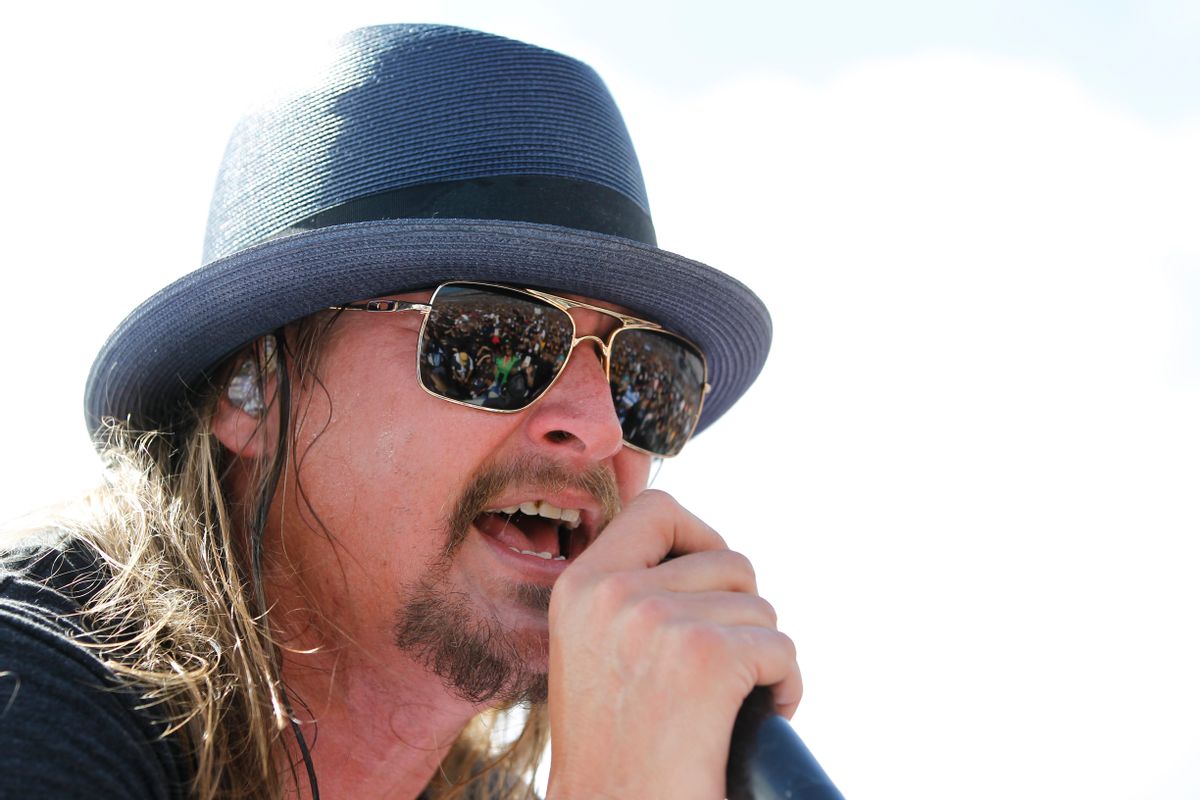 Few things, at this point, could surprise anyone about America's "wildest red-state rocker," Kid Rock. In a Guardian interview released earlier this year, Rock spoke candidly about issues that ranged from gay marriage to women to his son to smoking weed to thinking rap-rock is "pretty gay." He had opinions. He made them known. And it was hard to see at the time how he ever possibly could have topped them.

It turns out, Kid Rock still has many more opinions to dispense. (And some of them actually surprising!) In a piece from the upcoming March issue of Rolling Stone, Patrick Doyle interviews the deeply unapologetic performer; and among the many things we learn are: Rock is "flabbergasted" by Beyonce worship. It's not weird for him to receive text messages from Sarah Palin. And, perhaps strangest of all, he frequently holds dinner parties with Josh Groban, Mike Diamond and Sean frickin' Penn.

Below we've rounded up some of the most truly mind-boggling nuggets of information to come out of the Rolling Stone issue. Enjoy!

On Beyonce's body just not doing much for him:

"Beyoncé, to me, doesn't have a fucking 'Purple Rain,' but she's the biggest thing on Earth. How can you be that big without at least one 'Sweet Home Alabama' or 'Old Time Rock & Roll'? People are like, 'Beyoncé's hot. Got a nice fucking ass.' I'm like, 'Cool, I like skinny white chicks with big tits.' Doesn't really fucking do much for me."

"He's the most decent motherfucker I've ever met in my life."

On his diligent pursuit of MTV camera time:

"We were working for it, just kind of showing up and hanging out," he says. "We were sucking big cocks."

On his promiscuity at the peak of his music career:

"I'd be driving the field trip Monday after I banged, like, four hookers," he says. "Well, not hookers, but, you know, four nice girls on Saturday night in Cincinnati.

On juggling partying and fatherhood:

"He knew I was wild," Rock says of his son. "I didn't hide any of that. But it was kind of our dirty little secret together. He saw girls come in and out, which probably wasn't the healthiest thing. I tried not to do it too much, but fuck, I had a dick and I was famous at that time, you know? I can only talk about this now, since he's 21. I wish I could've talked about it, said, 'Hey, I was wild. But I showed up to work on Monday to be a father.' "

On what he learned from his trip to the Middle East:

"I spent two Christmases there . . . slept in Saddam's bedroom," he says. Those trips affirmed Rock's political beliefs. He's pro-torture in some situations, and he sees gun ownership as a sacred right. "Getting rid of them is not the answer," he says. Adds Greg, "If all the guns were taken from American citizens, the only ones who would have guns would be the damn outlaws."