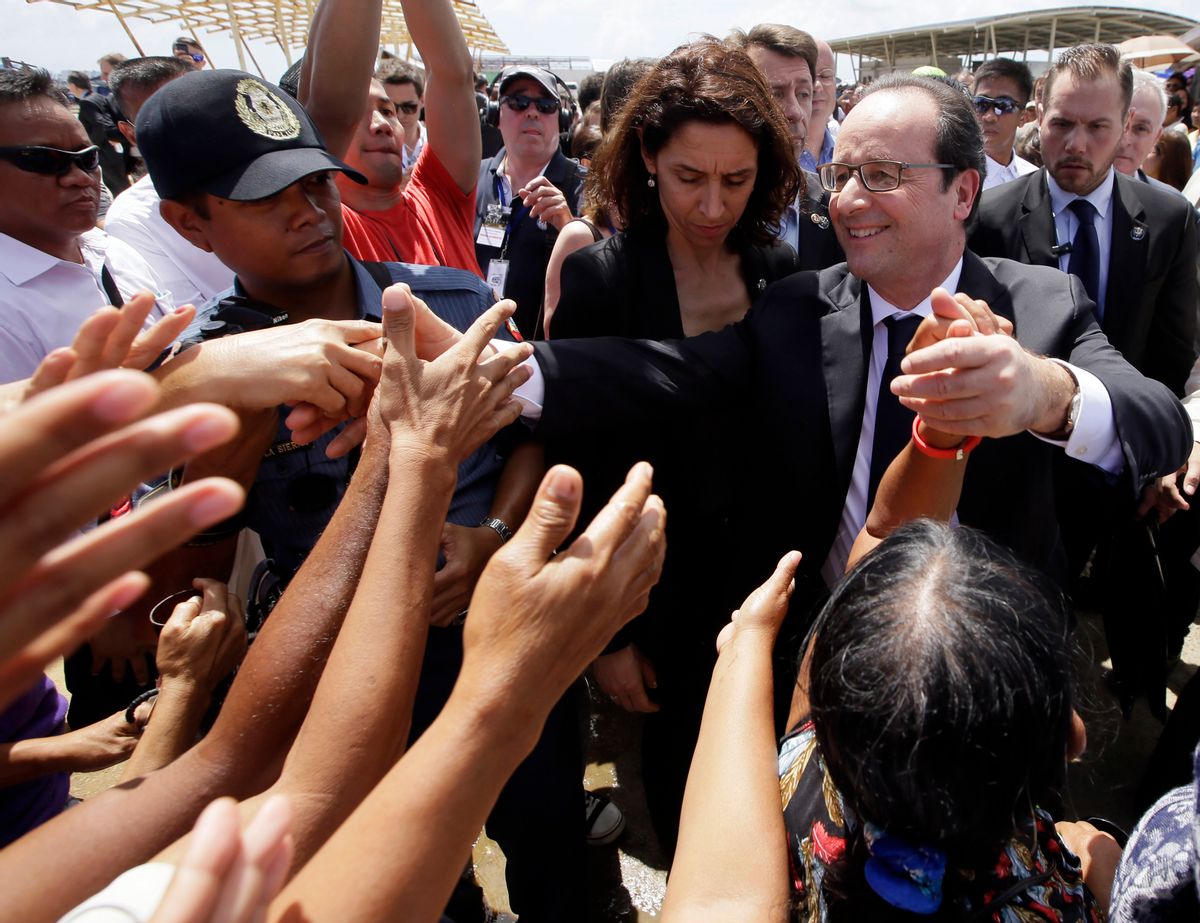 GUIUAN, Philippines (AP) — French President Francois Hollande on Friday took his warning about the need for funds for a landmark climate deal to a central Philippine town that was devastated by a killer typhoon in 2013.

Hollande arrived in Guiuan town, where Typhoon Haiyan made its first landfall before claiming more than 7,300 lives, after he and President Benigno Aquino III launched an international appeal to back efforts to seal the climate change accord in Paris in December.

Hollande warned that there will be no deal if wealthy countries don't commit adequate funds to help poor nations fight global warming.

"There will be no agreement concluded in Paris if the countries, the poorest countries, are not convinced that there will be a fund ... which would be made available to them," Hollande said Thursday.

In Guian, he is expected to meet with fishermen, tour the town and make a statement at a local school on the need to fight climate change. Adding star power to Hollande's party are two French actresses — Oscar winner Marion Cotillard and Melanie Laurent.

The Paris agreement isn't expected to stop climate change, but organizers hope to secure for the first time the commitment of most countries to do something about it. Previously only rich countries have committed to limit their emissions of global warming gases, primarily carbon dioxide, from the burning of coal, oil and gas.

The slow-moving U.N. talks got a boost last year when top climate polluters China and the U.S. jointly announced emissions-limiting pledges for the Paris deal, which would take effect in 2020. The European Union and Norway have also presented climate targets.

The conference faces a major dilemma on how to raise $100 billion in yearly climate aid by 2020 to help poorer economies transition to clean energy.

Hollande chose the Philippines, which was devastated by one of the most powerful typhoons on record to hit land, to warn of the dangers of global warming and call for governments to pledge to reduce greenhouse gas emissions.

Aquino, whose archipelago nation is exposed to typhoons in the Pacific Ocean more than any other, has said previously that effects of climate change were worsening at an alarming pace, with typhoons becoming stronger, more frequent, more devastating and larger in scale.

"In the eyes of the world, Manila is a symbol of suffering and hope," Hollande said.

A climate change accord is a way "to make sure that the world will not face global warming that would lead to even worse disasters than the ones we've been facing," he said.

The international appeal, named "Call of Manila," urges the international community "to conclude a universal, equitable and ambitious climate deal ... to preserve our planet as a livable place for future generations."

It says developing countries like the Philippines have contributed the least to climate change, but are the ones that suffer the most from global warming.