"House of Cards" is back! Here are 5 spoilers to tide you over until your epic binge begins

How is Frank Underwood faring in the Oval Office? What will Claire do as first lady? And what happened to Doug?! 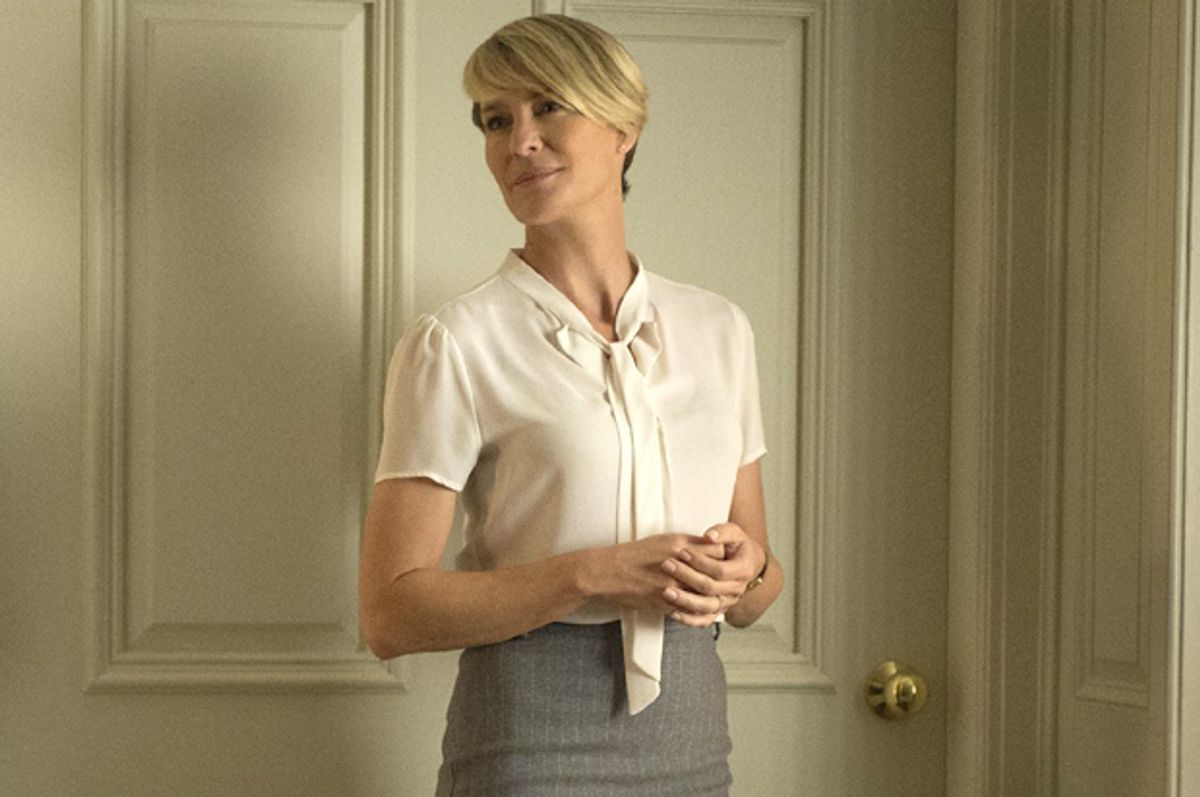 Robin Wright as Claire Underwood in "House of Cards" (Netflix)
--

At the end of Season 2, Frank Underwood had finally seen all of his devious little chickens home to roost: he successfully maneuvered the president out of office in an epic revenge scheme that began when the president reneged on his promise to name Frank secretary of state way back in the beginning of Season 1. The long Chinese counterespionage and campaign finance shenanigans plots of Season 2 — including his promising (but ultimately lackluster) arch-enemy, the evil billionaire-next-door Raymond Tusk — were wrapped up in a bow and deposited under his Oval Office desk.

So what does Frank Underwood do now that he finally has everything that he wants? Governs? That's boring. But the first episode of Season 3 offers plenty of hints that the best plotlines are yet to come. Here are five details that will keep your excitement level up until you can get home, cancel all of your weekend plans, and plow through the entire season in one (disturbed, unwashed) sitting.

Doug is alive — battered and just barely not-comatose after Rachel the secret call girl brained him with a brick and escaped his obsessive clutches, but alive. And he has a brother who seems to be a fairly well-adjusted married father type who might be the only person in the world who genuinely likes Doug, so of course Doug sends him packing as soon as he's able to hobble home from the hospital and get back to work, which, for a guy in his condition, is mostly seething silently at the television and weeping gently into his power tie.

Frank goes on "The Colbert Report" to talk about his America Works program, and fails catastrophically. Remember the last time we saw Frank Underwood on Colbert? Yeah, it's not like that.

3. Claire Underwood is not your mother's FLOTUS

Don't expect her to grin and Mellie Grant her way through the White House. As the season begins, Claire pushes for Frank to nominate her to fill the UN ambassador chair. He's concerned about spending too much political capital forcing through a confirmation when he's facing an election — and so of course their precarious perch in the Oval Office motivates Claire to want to secure her own position sooner rather than later. Claire's refusal to ever completely back-seat her own ambition is one of her character's most redeeming traits. And if you're curious about how style icon Robin Wright's look is evolving with her character's role, Women's Wear Daily spoke with her stylist, Kemal Harris, who suggests we keep an eye on Claire's power pearls: “I strung those myself because the things we called in from Mikimoto and others were too big, and Claire is a jewelry minimalist.”

In an effort to show Claire the realities of working with the U.N. on U.S. military decisions, Frank brings her to the situation room, where a military target — a convoy transporting someone named Abdullah (of course) — is armed and ready. Are there any children on board, Frank wonders aloud, but come on, do you really think it matters what the answer is?

Gavin Orsay, the Anonymous-styled hacktivist-turned-FBI informer could have been an average throwaway character after the Lucas storyline was resolved in season 2, but anything actor Jimmi Simpson touches turns to comic gold — especially a recurring role on "House of Cards" as a hacker with a guinea pig sidekick. He's a McPoyle, remember? And he's the only person Doug can turn to now that Rachel's in the wind. This buddy pairing has promise, but we are going to strongly advise against letting Doug pet-sit Cashew in the shape he's in.