Why the color of a dress made the Internet explode: An exploration

War rages on over the color of a dress. Even the Kardashians are getting involved. Here are the best theories why 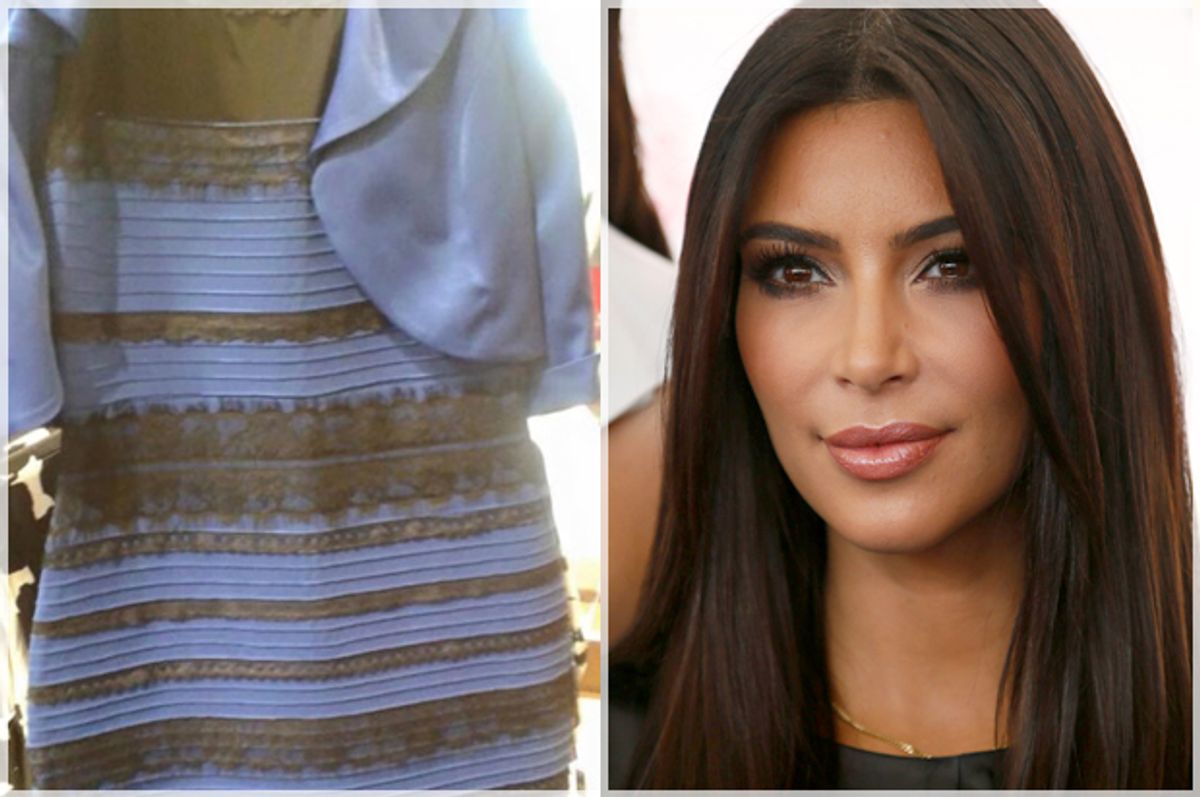 Here is the dress that needs no introduction. If you haven't seen it -- or have aggressively ignored the online conversation -- you've at least been around a friend or loved one yelling/sobbing/negotiating about what color it is. The dress, which first surfaced on Tumblr earlier this week before exploding into mainstream consciousness on Thursday evening, was a BuzzFeed post by 6 p.m., the subject of much contention at the Kimye household by 11 p.m., and a #1 trending topic on Twitter by midnight.

That BuzzFeed post, written by Cate Holderness, received 16 million views by midnight, and now sits north of 25 million visits. As a result, that one single dress brought more simultaneous visitors to the website than at any other point in its history, according to BuzzFeed Editor in Chief Ben Smith. And, while BuzzFeed is the biggest beneficiary, the dress is making waves across the entirety of the Internet:

Science can help to explain why this dress has become such an unprecedented sensation — for example, why people are registering the color of this dress differently.

Wired, for one, tells us this:

"When context varies, so will people’s visual perception. 'Most people will see the blue on the white background as blue,' Conway says. 'But on the black background some might see it as white.' He even speculated, perhaps jokingly, that the white-gold prejudice favors the idea of seeing the dress under strong daylight. 'I bet night owls are more likely to see it as blue-black,' Conway says.

Time tells us that, if you're viewing it on the screen, technically it is both blue/black and white/gold. There is no right/wrong.

“Anyone who has ever worked in color management knows that a digital image is subject to many variables, including screen brightness and contrast, color calibration and ICC profile, the type of screen material and it’s corresponding lighting method, as well as the ambient light present,” says Matthew Sexton, a web designer of nearly 10-years experience, who formerly worked in TIME’s international production department.

A cognitive neuroscientist at Rockefeller University, told BuzzFeed News that our vision is affected in large part by "top-down processing":

"Each person brings a different set of experiences and expectations, as well as attention levels and particular eye movements.

For example, what you looked at just before you looked at the dress could influence the way your brain perceived it, Borghi added. 'It could also be that you’ve seen dresses (or fabric) with the same texture or shape before, which could also affect your perception.' This general phenomenon is called priming."

However, even accounting for all the science, that still doesn't explain why a photo of a stupid dress — cryptic coloration or no — managed to stop the Internet in its tracks. How can you even begin to explain the — literally unprecedented — fever pitch of sudden interest? Looking for answers, Motherboard interviewed former Gawker editor (and viral-content wizard) Neetzan Zimmerman for his take on the matter:

If you were still blogging for Gawker with an eye on discovering the next big hit, would you have guessed this would be so huge?

It definitely has all the qualities of a viral hit: It's dumb, divisive, visual and eminently shareable.

Why does being divisive make us want to share things?

If that's not a satisfying enough answer, Twitter has ushered in a slew of its own theories. And the logic really just checks out on some of these, folks. Here are some important takes for your consideration -- because we really shouldn't be overlooking the fact that this all perfectly coincides with everyone's favorite "Black and Blue" boy band, the Backstreet Boys', comeback tour: