No weekend plans yet? There's a Grindr for “50 Shades” fans now, because of course

The app invites newbies to explore their kinks. Does it have any responsibility to educate them about consent? 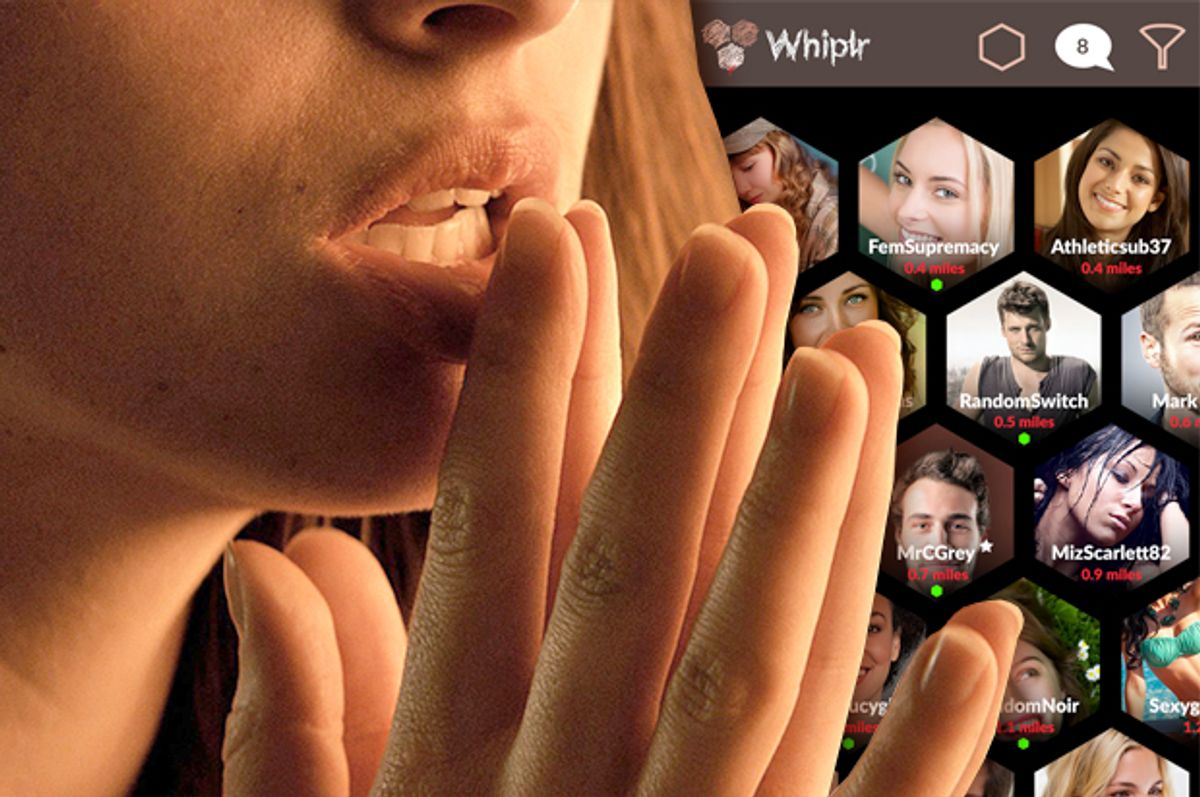 So, like, you watch that unsexiest of sex movies and for some reason do not swear off boning forevermore but instead feel inspired to get your kink on -- let's just pretend. (Still trying to wrap my head around this possibility. Someone please enlighten this hypothetical person to "Secretary.") Well, now THERE'S AN APP FOR THAT. Meet Whiplr, perhaps the most inevitable app of all time: It's Grindr but for kinky stuff.

Indeed, it is just like your average location-based messaging app, only it asks you to select your kink from a list including vague things like, "Just curious," "Behaviors" and "Odors." It also allows you to send other users "Sparks," which the app describes as "kink-related animations ... to get the conversation going."  (I would describe this in greater detail, but I don't yet have access to all of the app's bells and whistles because my profile hasn't been approved -- maybe because I made my profile pic an image of my garden. Hey, I'm onto that next-level freaky shit: succulents. Rawr.) The interface is sleek and straightforward, although the app doesn't yet have the mass of bodies required for success: All but one user was more than 300 miles away from me.

What I found most interesting is that Whiplr is targeting not just seasoned kinksters, but total newbies too. The press release reads, "A new app aims to woo you into the world of kink and help you step out of your comfort zone." It continues, "If you’re just curious and want to discover your kinky side, the app is a friendly environment to do so." In a statement to Salon, Whiplr's chief communications officer Daniel Sevitt said, "Whiplr is a great place for the kink-curious to be welcomed as they start their journey." "It all begins with filling in your profile. Once you do that the community will reach out and help you learn more. Find someone experienced to mentor you or find someone just like you and arrange to meet up at a fetish event."

Given the recent release of the "Fifty Shades of Grey" movie, which Whiplr plays off of in a promotional video (see below), it's clearly a great time for a beginner-friendly app like this to launch.

Well, it is and it isn't. This week, a University of Illinois student was charged with sexual assault after allegedly blindfolding and binding a fellow student, and gagging her with a necktie. He reportedly hit her with a belt several times before the woman told him "no," "stop" and "you're hurting me." Then he started hitting her with his fists and sexually assaulted her as she begged him to stop, according to the police report. He told police that he was trying to re-create a scene from "Fifty Shades of Grey."

Did this young man genuinely think this was how kink goes? I suppose it's impossible to know for sure, but based on sexual assault research, it is unlikely. As Tara Culp-Ressler wrote at Think Progress, "Most sexual assaults aren’t a case of miscommunication about where the line of consent is; instead, according to research conducted into rapists’ behavior, the people who perpetrate sexual assaults typically make calculated moves in an attempt to control their victims’ behavior." I have to lament here that such a defense would be even less believable if the mainstreaming of kink, via "Fifty Shades" and services like Whiplr, were accompanied by good information about the importance of consent and boundaries in BDSM.

And there are legitimate risks to the casual, unguided introduction of total newbies to kink. (It must be said: There are risks too to the casual, unguided introduction of total newbies to sex, period.) As sex therapist Esther Perel brilliantly said in a recent interview with the Atlantic, "I find it amazing that this country at this point is going to spill quantities of ink talking about Fifty Shades, when it doesn’t even have a basic education on sex. It’s like you’re introducing alcohol to people who haven’t had any water in years." As a country, we're horribly dumb about consent, even when it comes to vanilla sex, and BDSM requires even greater sophistication about boundaries and communication.

Of course, the question is whether anyone will flock to Whiplr -- and if they do, whether they will stay. "There was a similar website, collarme.com, that burst onto the scene many years ago and ultimately lost popularity and disbanded in 2014, largely collapsing under the weight of fake profiles, predators and user neglect," says Dan. "The same fate befell alt.com." Whiplr's fate remains to be seen.