Why on earth is Jon Stewart "feuding" with a professional wrestler?

Today in weird partnerships: The "Daily Show" host is slated for an appearance with the struggling WWE. Here's why 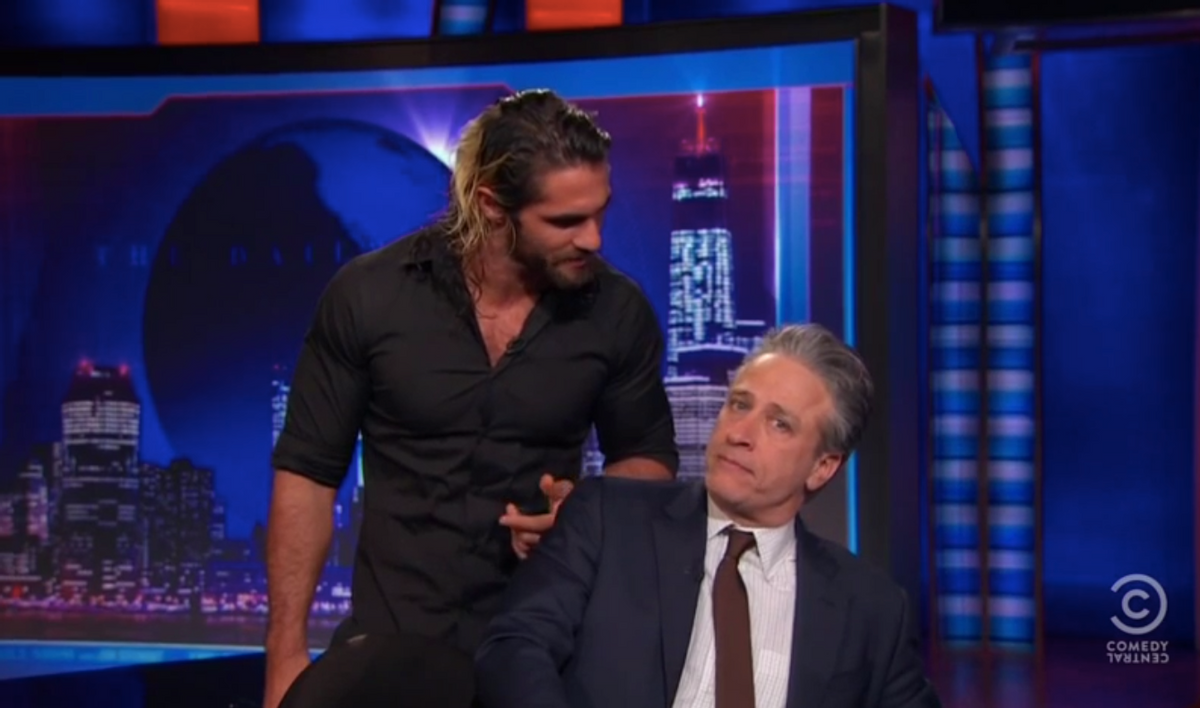 Jon Stewart's "Moment of Zen" was a rather hostile one Thursday night as the swaggering villain of the WWE, professional wrestler Seth Rollins, crashed the segment to invite him to "Monday Night Raw," the wrestling promotion's flagship weekly TV show. The pragmatic Stewart seemed to acquiesce, but not before jumping on the 6-foot-1 wrestler's back and putting him into a headlock.

WWE has confirmed to The Washington Post that Stewart did, indeed, accept the invitation. That means that, in no time at all, the world will get a look at Stewart (and his "160 pounds of dynamite") standing across the ring from the off against Rollins — although we don't know exactly when that will be. Plans for the next installment of the show, which will be filmed in Newark, N.J., remain unknown, but a Stewart appearance near his home base of New York City seems logical.

"Okay," you might find yourself saying. "But why?" While we're used to seeing Stewart picking verbal matches with conservatives, how, exactly, did he wind up neck-deep in a feud with a professional wrestler?

It all started with a blustery (but totally in-character) rant from Rollins -- a top bad guy, or "heel," in the WWE, currently embroiled in several top storylines -- who proclaimed to the world on a Feb. 16 episode of "Raw":

Hell, if I wanted, I could become president... Or, you know, I could take over as host of "The Daily Show" for Jon Stewart and make that thing actually watchable.

To which, Stewart released his own response: "You just stepped into a world of hurt, my friend."

That video posted through "Raw's" YouTube account has since reached well over 1 million views. We can't help but suspect that this stunt is doing wonders for "WWE" -- which, at one point in 2013 was capable of raking in 20 million viewers in a single week. The network has steadily trended downwards since.

All of which is to say that this Stewart co-promotion is probably arriving not a moment too soon for the WWE. The publicly traded wrestling company has seen the value of its stock cut in half over the past year, after the WWE Network — a video-streaming service that now serves as its primary vehicle for monthly pay-per-view events — failed to meet subscriber benchmarks, spooking investors. With the company's biggest event of the year, "WrestleMania," only a few weeks away, the best opportunity to hook new subscribers is fast approaching. And so Stewart, a longtime wrestling fan himself, perhaps decided it was worth lending a hand — even if the partnership seems super weird at first blush.

Rollins, for his part, is hardly having trouble getting the attention of the Internet: Earlier this month, controversy erupted after a nude selfie of Zahra Schreiber, one of WWE's female wrestlers, was broadcast over Rollins' social media accounts. Following that incident, Rollins' fiancee tweeted two naked photos of Rollins from her since-deleted personal account. There is still speculation underway on whether Schultz's account was hacked. Most signs point to "no." Rollins apologized to WWE fans.