"House of Cards" returns: Let the war between Frank and Claire Underwood begin

Having dispatched all of their mutual enemies, Frank and Claire's biggest problem is now each other 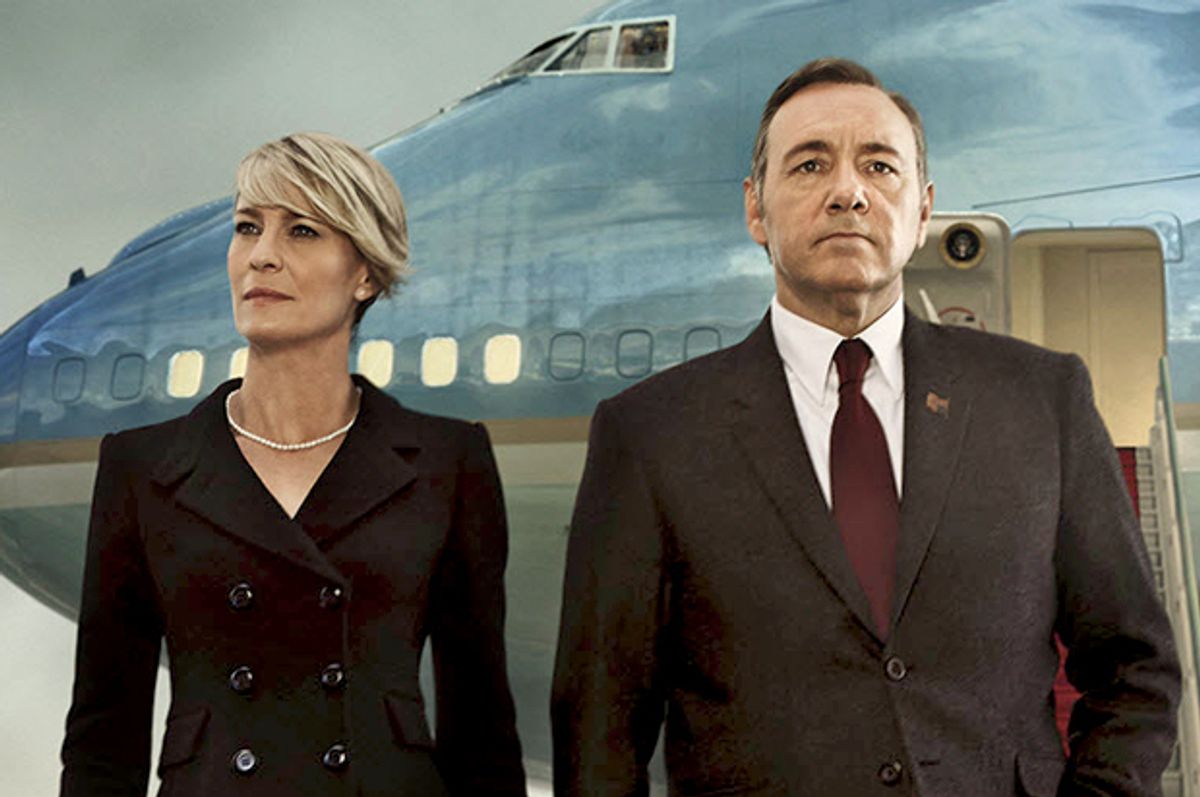 Frank Underwood is getting older. As season 3 of “House of Cards” progresses, one carefully framed and neutrally toned shot after another, it becomes more and more obvious: his dark hair is graying, his erect stature is beginning to sag and stoop. It’s the show’s canny nod to the visual palette of Washington, D.C., a landscape it is in love with and in the business of reproducing. Politicians wear black, gray, blue and occasionally red; offices are painted and outfitted in tastefully muted furnishings. And a commander in chief’s hair goes gray.

Next to him, in stark contrast, blooms Claire Underwood — somehow increasingly beautiful with age, every blonde hair perfectly in place. She has, from the pilot of “House of Cards,” been Frank’s enigmatic arm candy; he shares his strategies and observations with us, the audience, but she keeps her own inscrutable counsel. She’s flirted with the ruthlessness that Frank employs regularly; she’s also evidenced, now and again, a conscience less hardened than his. Claire is just as bad as Frank, nine days out of 10; on the 10th, she feels a slight fluttering of conscience. (Those last-minute reminders from her moral compass are usually dropped into the storytelling of “House of Cards” to propel the story forward.)

Up until now, “House of Cards” has used the considerable talents of its leads Kevin Spacey and Robin Wright to shape the Underwoods as an asymmetrically appealing force to be reckoned with. Frank, the lifelong politician, played a game to be reckoned with; Claire, a lifelong aristocrat, was sent along afterwards to soften the blow. They were both seduced by the siren call of power, and found it was most effective working in tandem, two halves of a war machine.

In season 3 of “House of Cards,” the show turns away from their effectiveness together — and their sociopathic inability to feel compassion for anyone around them — to focus instead on the mechanics of the marriage of these two people, especially now that Frank Underwood has ascended to the highest office in the land. The problem with spending your whole life working toward just one thing is that once you get it, it’s hard to know exactly what to do with yourself; season 3 is about Frank and Claire finally being at the top of the mountain and coping with the fact that there aren’t too many more mountains to climb. I encourage you to stop reading here if you don’t want to know any more plot details about the third season, which went live at midnight this morning.

The biggest problem with last season of “House of Cards” was that it created a compelling, nearly amoral cast of characters that seemingly couldn’t lose; in the first season, it seemed dicey for a bit there, but by the denouement of the second season, Frank and Claire had the entirety of Washington eating out of their hands. It made the story predictable. It wasn’t entirely obvious why or how Frank and Claire were going to get ahead, but they were going to win. “House of Cards” took the opportunity of the very successful first season for the show to make its characters just as successful, elevating them to first the vice-presidential mansion and then to the White House itself. Along the way — maybe just because the show wanted us to know it could — “House of Cards” offered up an extended Civil War analogy, a convenient but meaningless threesome, a few quick and dirty murders, an abortion/rape/adultery scandal that hit every ripped-from-the-headlines beat on the way down, and, oh yeah, random Christian lesbians. The driving ruthlessness of the show remained the same — “House of Cards” is defined by a fundamental cynicism of human nature — but there were a lot of digressions on the way to the finale.

Season 3 is not necessarily an improvement on the first or second. The show has made the rounds at this point, and some of the most tiresome subplots, like the cyberterrorism storyline, have stuck around for no clear reason. Doug Stamper (Michael Kelly) is alive, and his arc this season is about finding his way back to Frank’s good graces. The result is one of the most awful journeys with an increasingly deranged man and the fled-but-not-forgotten object of his obsessions, Rachel Posner (Rachel Brosahan). The viewer is forced to grapple with sympathy for Stamper — a recovering addict who is now also recovering from a lot of physical trauma — and pure disgust for him, as he plans and executes scheme after reprehensible scheme.

Numerous other characters are in holding patterns — Jackie Sharp (Molly Parker) has a minimally featured relationship storyline with her paramour from last season, Remy Danton (Mahershala Ali), who now works at the White House. Linda, Christina, Lucas, and Tom Hammerschmidt are all out of the picture; the Walkers make no from-the-grave appearances; Freddy does not roll back into town with his famous barbecue sauce. The show has dispensed with a lot of the real-world elements that made it so coldly compelling. And it’s specifically dispensed with a lot of the show’s villains; those poor suckers who briefly thought they could stand up to Frank Underwood.

On the other hand, though, that purging of minor characters is setting the stage for a bigger drama entirely: the showdown between Claire and Frank. Throughout the season, Frank’s presidency tests their well-oiled marital machine; as the first season did, this season examines and analyzes their meshed identities. And as Claire tries to make a political identity for herself separate from her husband, she begins to realize just how much their marriage has been about his advancement, not hers. There’s a lot that goes into this realization — a full-season of buildup that takes Frank and Claire from angry/sobbing sex on the floor of the East Wing and a prison cell in Moscow to renewing their vows in a little church down South and a physical altercation in the Oval Office. It is a satisfying, slow build, and one that feels not just 13 episodes in the making but three seasons — not just three seasons but 30 years -- for the inscrutable Claire Underwood.

As far as story goes, it is the best thing that could happen to the show — even if the third season ends before their conflict can really get started. The most thrilling moments of season 1 were in that episode where Claire sold out her husband as quickly and easily as throwing away a used paper towel. Now “House of Cards” is setting the stage for a fourth season where mommy and daddy are fighting, and the whole country stands in for their children. It injects some life into a show that has killed off or otherwise eliminated anyone else who could be in Frank’s way. And it showcases what has always been one of the best elements of the show: the silent, unknown reckoning happening behind Claire’s eyes, even as Frank barks out orders to everyone around him.

“House of Cards”’ political drama has a strong flavor of Shakespeare to it, and much of that is due to Frank and Claire playing Lord and Lady Macbeth for the denizens of Washington, D.C. But instead of both dying, they’ve instead both won; now it’s time to see how Lord and Lady Underwood resolve their marital strife, the strife of a marriage built on lies for the benefit of a political system where only one person — one man, usually — can be head of state. In a sublime moment halfway through the series, Claire turns to Frank on Air Force One and says, “We’re murderers, Francis.” He retorts: “No we’re not. We’re survivors.” And after blustering for a minute, he continues: “I should have never made you ambassador.” She looks at him -- hurt, but still cold. “I should never have made you president,” she intones, her voice smooth like glass. Frank’s caught out, and before the scene cuts to black, he turns to the audience and looks back at us. “What are you looking at?