In the bleak White House of Frank and Claire Underwood, only Doug Stamper's pure love can save us 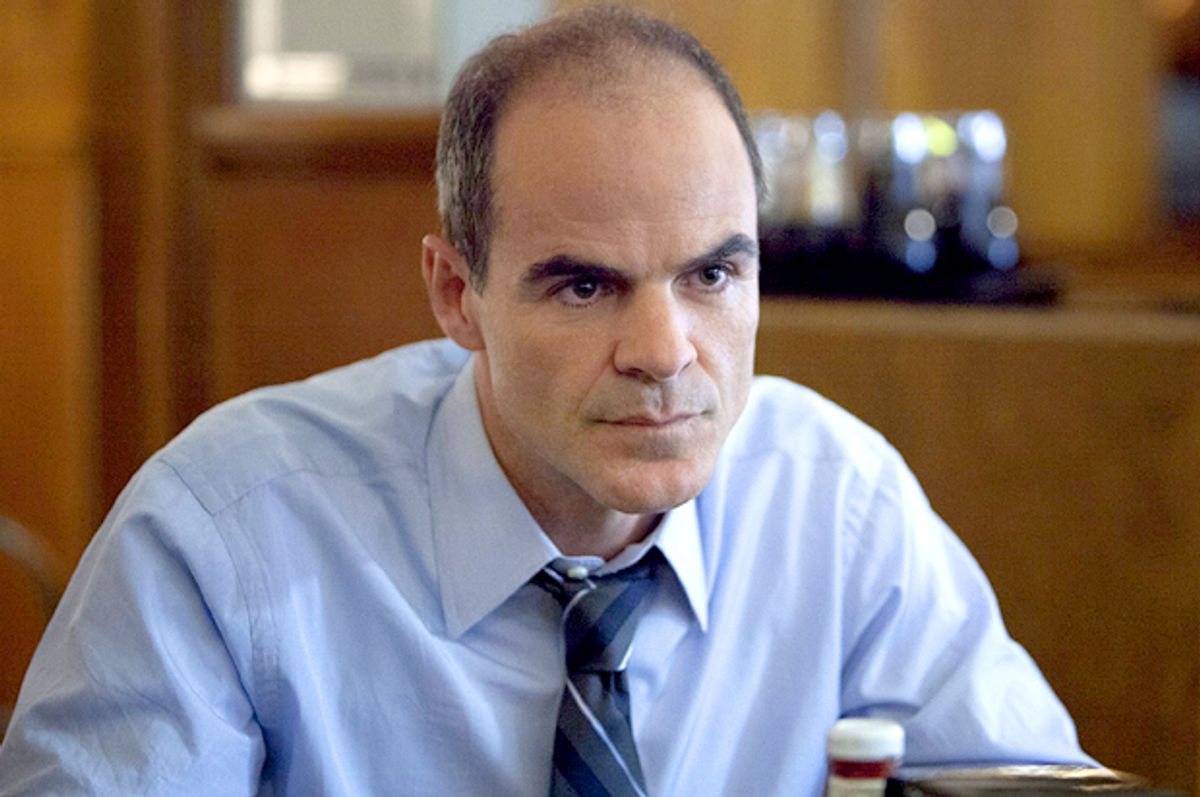 Michael Kelly as Doug Stamper in "House of Cards" (Netflix)
--

We left the last season of “House of Cards” with Doug (played with understated grace by Michael Kelly) prone on the ground, a crime scene waiting to be discovered, one single eye-twitch away from death on the dark woods floor. He was dispatched with a brick by Rachel, the call girl he hired to coax congressman Peter Russo out of sobriety and into a flaming relapse binge that eventually allowed Doug’s boss Frank Underwood to add him to his thriving body count (faked suicide by carbon monoxide poisoning, running car inside a closed garage, staged while Russo was passed-out wasted, a classic). That chain of events led Doug to hide Rachel in his perverted WITSEC-for-one where he stoked his obsession with her in a generic rented apartment — including his particularly disturbing version of a book club for two — until Rachel wriggled loose, brained him with a brick and left him for dead, much to my deep and immediate despair.

Let me be clear: Doug Stamper is not a good man. I did not mourn the almost-certain loss of even a dubious hero. Doug Stamper deserved to be outwitted and perhaps even to be killed by Rachel, who only wanted to move on with her life and work a boring job, attend a hipster millennial church and have a nice girlfriend like a normal person already. And his meticulous orchestration of Peter Russo’s downfall in Season 1 that set this chain of events in motion was particularly evil because Doug Stamper had his own struggles with sobriety and exploited his intimate knowledge of Russo’s weaknesses for his boss’ political gain.

But let’s also be fair — Doug Stamper didn’t push Rachel in front of a train for knowing what she knew, unlike some people we could mention who are now leading the free world. But make no mistake — his decision to keep Rachel alive speaks to his loneliness and poverty of soul, his need for a lone extracurricular in his workaholic life, not to a sense of kindness or mercy. And now that he is in physical and emotional shambles after her escape, he understands how he will pay for that moment of personal indulgence, that decision to privilege his own emotional needs over the demands of the job. Rachel is a long lunch with disastrous consequences.

Despite all of that, Doug Stamper is the undisputed, unsung hero of “House of Cards.” The thought of continuing into a third season without him was too grim even for a fan of this show to bear. Seeing him wake up in the hospital bed in the first episode of the new season and white-knuckle his way through recovery erased even the tedium of the mid-Season 2 doldrums. In the cesspit of non-redemption that is the Underwood cabal, Doug Stamper does not even rate as a rather lesser angel. (See: likable lobbyist Remy Danton, whose complicated feelings toward the Underwoods sometimes echo our own.) But neither is he a Seth Grayson, the reptilian director of communications who clawed his way into the Underwood administration through bribery, deceit and blackmail to serve his own ultimate power agenda.

Doug Stamper does not have his own agenda. Despite the terrible things he has done in the name of his job, Doug Stamper is pure. When we watch Doug, we are watching the dogged pursuit of excellence for its own sake, not for individual gain. His delivery system is not exactly Olympian, true, but his enterprise remains (on a purely metaphorical level) downright admirable. In a workplace environment that rests uneasily between Machiavelli’s backroom and Macbeth’s castle, Stamper’s dedication to his job is the evil opposite of quixotic — he is a stalwart knight of the dark king, clinging to an idiosyncratic chivalric code that demands unwavering loyalty to his depraved boss. It’s sad and demented, but you have to admit the guy is really good at his job.

And it is a thankless job. Season 3 begins and Frank Underwood — dog-strangler, casual murderer, BBQ restaurant dream-squasher — is president of the United States. There is no justice, no redemption, no compelling case for empathy, none of the higher virtues humans seek in art to be found in Underwood’s story. Frank Underwood is not a likeable guy when you get up close. He does not inspire loyalty, nor does he really offer it, even to his own wife, whose career he willingly boosts only when it benefits his own. And Claire, for her part, returns the favor. To what can we, the viewers, cling in the Fincher-lit dungeon of power chardonnay and furtive cigarettes the Underwoods call a home? All of their challengers end up dead or in prison or disgraced, so much dust for Doug Stamper to brush off his boss’s shoes.

Even Doug Stamper, loyal to a fault, finds himself on the outs after he wakes up from his coma and heals from his injuries. And for good reason: he has a loose end out there in Rachel. He can’t find her and she knows enough to take them all down. The Underwoods are kind to Doug in his convalescence — they send flowers, Claire even visits, and they have his apartment cleaned and fridge stocked upon his return home — and that’s how he knows that they are done with him, because the Underwoods are only kind to those of no consequence. It is enough to move Doug Stamper to tears in the most emotionally resonant scene on “House of Cards” since the FBI agent threatened Gavin Orsay’s guinea pig, the only true innocent on this show.

Doug, gutted over disastrous reactions to Underwood’s “America Works” program,  knows that only he can help fix Frank’s sinking political ship. He is so determined to get to a meeting with Frank as soon as possible that he ignores his body’s signals, attempts to shower without assistance and falls, breaking his arm. That would be enough to make a lesser character say fuck it, let’s go work for a law firm. But when Doug Stamper splinted his broken arm on the kitchen counter with duct tape and a wooden spoon and hobbled, shattered in body and heart, to that meeting and reported for duty, I thought finally, this show understands love.

Of course, brutality is also what makes “House of Cards” so much fun to watch. Ruthless behavior without insurmountable consequence is delightfully cathartic when experienced at a remove. “House of Cards” is like “Game of Thrones” in suits, but the beheadings are held in secret caucus side-meetings and Joffrey is somehow the smartest person in the room. And now we know Doug not as a White House cyborg of efficiency but as a human with weaknesses he’s immersing himself in at the end of Episode 1, sabotaging his sobriety by taking the prescribed pills to dull the pain in his body, hiring a Rachel-surrogate to shoot bourbon into his mouth with a syringe before they have sex to dull the other, much worse pains. Because the stakes for Doug’s fall from grace are now so evident, “House of Cards” has rewarded its loyal viewers with an unlikely gift: the hope, slim as it may be, for a redemption story.

I learned my lesson on binge-watching “House of Cards” last year, when I found my mood darkening with every “play next” click of the remote. Two weeks ago, when Netflix accidentally (?) leaked Season 3, I made it all the way through the first episode before the stream disappeared, and to be honest, I felt relieved when my access stopped. I know I need to pace myself with these people and this story if I’m to be sufficiently fit to look other human beings in the eye, and so I will follow Doug’s journey one hour at a time, perhaps bookended by more uplifting programming, like “Law and Order: SVU” or reruns of “Celebrity Rehab.”

“House of Cards” is not a likeable show. It does not, on cursory inspection, inspire loyalty. Doug Stamper is as capable as any of Olivia Pope’s “Scandal” gladiators, but on “House of Cards” there is no Olivia Pope to ride in with the white hat to press his skills into service to justice, or the Republic, or the sheer sensory pleasures of mixing off-white cashmere with torture. And yet it is infinitely watchable, even demonically funny at times (any time Kevin Spacey breaks a fourth wall, the laughs, deliberate or not, will follow) and so I can almost forgive the show's main dramatic failure: the lack of a suitable nemesis for Frank Underwood. We know he'll always win in the end — the only question is how deeply he will humiliate his opponent when he comes out on top.

Still, there is something incredibly compelling about being that close to unchecked ambition and the hunger that propels it, not to mention the thrill of gaining and wielding power with immunity from any human emotional complications. It inspires an uneasy attachment mixed from admiration and fear. Doug Stamper knows this on a very intimate level. Doug Stamper, then, understands us. And so in this show full of terrible characters doing terrible things, I cling to him -- to his pursuit of pure excellence, to the virtue of a job well done, to the base thrill of feeling untouchable by association, desperate illusion though it may be.