It's worse than Scott Walker and Ted Cruz: Secrets of conservatives' decades-long war on truth

The right knows that facts and reason have a liberal bent. That's why their decades-long strategy is to lie 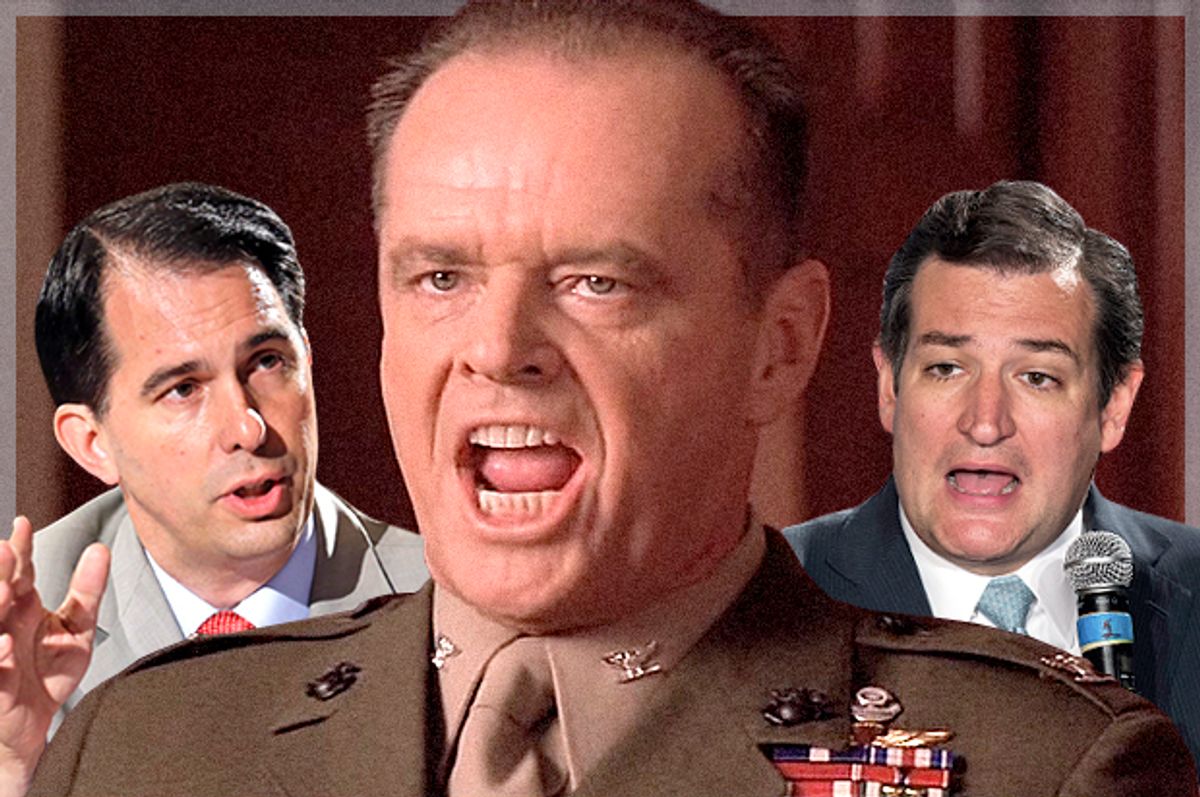 Deep on page 546 of his 1,839-page budget, Wisconsin’s Governor Scott Walker tucked in a crucial idea. He proposed to strip a principle from the mission statement of the University of Wisconsin, a school that attracts students from all over the nation and from 131 foreign countries. From the core philosophy that has driven the university since the turn of the last century Walker wanted to hack out the words: “Basic to every purpose of the system is the search for truth.” Rather than serving the people of the state by developing intellectual, cultural and humane sensitivities, expertise, and “a sense of purpose,” Walker prefers that the state university simply “meet the state’s workforce needs.” In the face of scathing criticism, the governor backtracked and, despite a trail of emails that led to his office, tried to claim the new language was a “drafting error.”

But Walker’s attempt to replace the search for truth with workforce training was no error. Since the earliest days of Movement Conservatism in the 1950s, its leaders have understood that the movement’s success depends on destroying Americans’ faith in the academic search for truth. For two generations, Movement Conservatives have subverted American politics, with increasing success, by explicitly rejecting the principle of open debate based in reasoned argument. They have refused to engage with facts and instead simply demonized anyone who disagrees with their ideology. This is an astonishing position. It is an attack on the Enlightenment principles that gave rise to Western civilization.

Make no mistake: the attack is deliberate.

The Enlightenment blossomed in the wake of the religiously-inspired Thirty Years War of the seventeenth century, when thinkers horrified by the war’s carnage set out to break the fetters of superstition and tradition that had prompted the strife. Descartes, Hobbes, Hume, Jefferson and other thinkers advanced the idea that if people could listen to reasoned arguments, weigh them against evidence and choose the soundest ones, progress would follow. The Enlightenment revolutionized science, culture and politics, and gave rise to the modern world.

Enlightenment ideals prompted America’s founding and reigned for generations as Americans searched for the best ways to manage the economy, changing demographics and international conflict. But in the 1950s, the idea of progress through reason presented a problem for wealthy businessmen. They hated New Deal legislation because it regulated business and protected workers. The boom years of the 1920s had been good ones for them, and they believed that the continued success of their enterprises depended on their complete control over their businesses and the workers they employed. They believed that government meddling in their affairs would disrupt natural economic laws. And with their downfall would come the downfall of the entire American economy, and with it, the nation.

But the problem was that the New Deal was extraordinarily popular. After an economic free-for-all of the 1920s that had pitched the nation into the Great Depression, Americans embraced the government regulation that reined in shady business dealings and protected workers. How could businessmen make inroads against such a popular program?

In 1951, a young William F. Buckley, Jr. articulated a strategy for opposing the consensus that supported New Deal policies. Buckley’s "God and Man at Yale: The Superstitions of 'Academic Freedom'” was a sophomoric diatribe by the Catholic son of a wealthy oil magnate, published by the small right-wing Henry Regnery Press. In it, Buckley rejected the principles that had enabled social progress for centuries and laid out a mind-boggling premise: The Enlightenment, the intellectual basis of Western Civilization, was wrong.

Rational argument supported by facts did not lead to sound societal decisions, Buckley claimed; it led people astray. Christianity and an economy based on untrammeled individualism were truths that should not be questioned. Impartial debate based in empirical facts was dangerous because it led people toward secularism and collectivism—both bad by definition, according to Buckley. Instead of engaging in rational argument, Buckley insisted, thinkers must stand firm on what he called a new “value orthodoxy” that indoctrinated people to understand that Christianity and economic individualism were absolute truths. Maintaining that faith in reasoned debate was a worse “superstition” than the Enlightenment had set out to replace, Buckley launched an intellectual war to replace the principle of academic inquiry with a Christian and individualist ideology.

Buckley’s radical idea didn’t go far at first, but Wisconsin Senator Joseph McCarthy provided a new rhetorical tool to advance the Yalie’s intellectual premise. In the early 1950s, McCarthy revealed the power of the outrageous lie. He sought to gain power by claiming to defend Christianity and individualism from the secret plots of the godless Communists in the American government. Since he had no evidence to support his crusade, he replaced substantiated arguments with outrageous accusations designed to grab headlines and rile voters. There were 205 Communists in the State Department, he trumpeted, or maybe there were 57 “card carrying Communists” there: after newspapers reported his attacks, McCarthy quickly moved on to new accusations. By the time fact-checkers condemned his statements, new headlines made the corrections old news. McCarthy’s hit-and-run smears suggested that a compelling lie could convince voters so long as it fit a larger narrative of good and evil.

In the same year that McCarthy self-destructed in front of a national TV audience during the Army-McCarthy hearings, Buckley and his brother-in-law L. Brent Bozell turned Buckley’s ideological stand against academic inquiry into just such a narrative. In their telling, a few brave men were standing against an evil majority trying to destroy America. Their "McCarthy and His Enemies" (1954) conflated Soviet-style communism with the popular New Deal consensus. They claimed that Liberals—a name they capitalized to suggest an organized political group—were forcing communism on America. Opposing this cabal were “Conservatives,” who stood for God and individualism. Until they converted it into a capitalized label, conservatism was understood to be a political philosophy that embraced popular programs that had been proven to work--like the New Deal— and rejected radical political experiments based on ideology. Movement Conservatives coopted the word "conservative" to do exactly what traditional conservatives opposed: advance a radical program. “Movement” Conservatives rejected the American consensus. They wanted to purge the country of the Liberals who made up the majority and create a new “orthodoxy” based on the ideology of strict Christianity and individualism.

To press this radical political program, Buckley launched the National Review in 1955, announcing that government activism “must be fought relentlessly.” He railed against President Dwight Eisenhower, who had modified the New Deal consensus into his own “Middle Way.” Eisenhower’s policies just proved that a dangerous cabal controlled both parties under “such fatuous slogans as ‘national unity,’ ‘middle-of-the-road,’ ‘progressivism,’ and ‘bipartisanship.’” Such moderation was socialism, he insisted, and, although the American economy was booming, he insisted that the American consensus was destroying both economic growth and liberty. With the election of JFK, the National Review harped so furiously on the communism snaking into American society at his direction that, after Kennedy’s assassination, even the Republican Supreme Court Chief Justice Earl Warren begged Movement Conservatives to stop their hateful rhetoric. Once again, Buckley spun language around, insisting that the troublemakers were the Liberals who were engaged in an “orgy of lynch excitement against the American Right.”

In 1960, a new voice added anti-intellectual populism to Buckley’s rhetoric. Political operative Phyllis Schlafly wrote "A Choice Not an Echo" to support Barry Goldwater’s quest for the presidential nomination. In her world, correct political decisions were simple: The nation was engaged in a great struggle between good and evil, and educated Eastern Elites who insisted on weighing the realities of a complicated world had enlisted on the wrong side. Elites complained that Goldwater “had one-sentence solutions” for complicated problems, she wrote, but simple solutions were the answer. Communism was bad, so anyone advocating government activism was evil. Elites arguing for government action were parasites. All they really wanted was money from government contracts, paid for by hardworking regular Americans.

This Manichean worldview led Barry Goldwater’s candidacy to grief in 1964 as voters recoiled from its aggressive irresponsibility, but with Ronald Reagan the Movement Conservative program gained the one new piece it needed to sell its ideology: a warm narrative. Reagan pushed Christianity and individualism with both lies and anti-intellectualism, but he did so with folksy stories and charm. He described a world of hardworking individuals threatened by “a little intellectual elite in a far-distant capitol,” and pushed policies that dramatically rolled back New Deal reforms. When opponents noted that his stories had little basis in fact and that his policies didn’t work as he claimed, he accused them of being haters and rallied supporters against the “Liberal media.” Journalists and opposing politicians first laughed but then looked on aghast as voters backed his warm fantasies over fact-based policy.

By the time of the George W. Bush administration, Movement Conservatives had constructed a post-modern political world where reality mattered far less than the popular story of Conservatives standing firm against the “Liberal agenda” of godlessness and communism. As a member of the Bush administration famously noted to journalist Ron Suskind, “the reality-based” view of the world was obsolete. It was no longer viable to believe that people could find solutions to societal problems by studying reality. “That’s not the way the world really works anymore,” this senior advisor to the president told Suskind. “We are an empire now, and when we act, we create our own reality. And while you’re studying that reality—judiciously, as you will—we’ll act again, creating other new realities, which you can study too, and that’s how things will sort out. We’re history’s actors… and you, all of you, will be left to just study what we do.”

Buckley’s intellectual stand had won. Facts and argument had given way to an ideology premised on Christianity and the idea of economic individualism. As Movement Conservatives took over the Republican Party, that ideology worked its way deep into our political system. It has given us, for example, a senator claiming words he spoke on the Senate floor were “not intended to be a factual statement.” It has given us “dynamic scoring,” a rule changing the way the nonpartisan Congressional Budget Office estimates the economic impact of tax cuts, to reinforce the idea that cuts fuel economic growth despite the visibly disastrous effects of recent tax cuts on states such as Kansas. And it has given us attempts in Oklahoma, Texas, North Carolina and Colorado to discard the A.P. U.S. History framework and dictate that students learn instead the Movement Conservatives’ skewed version of the nation’s history. Politicians have always spun information to advance their own policies. The practice infuriates partisans but it reflects the Enlightenment idea of progress through reasoned argument. Movement Conservatives’ insistence on their own version of reality, in defiance of facts, is something different altogether.

When Governor Walker replaced “the search for truth” with “meet the state’s workforce needs” in the charge to the University of Wisconsin, he did not make an error. He was articulating the principle that has driven Movement Conservatives since their earliest days: Facts and arguments can only lead Americans toward a government that regulates business and supports working Americans, and they must be squelched. The search for truth must be replaced by an ideology that preserves Christianity and big-business individualism. Religion and freedom for mega-business, Movement Conservatives insist, is what America is all about.