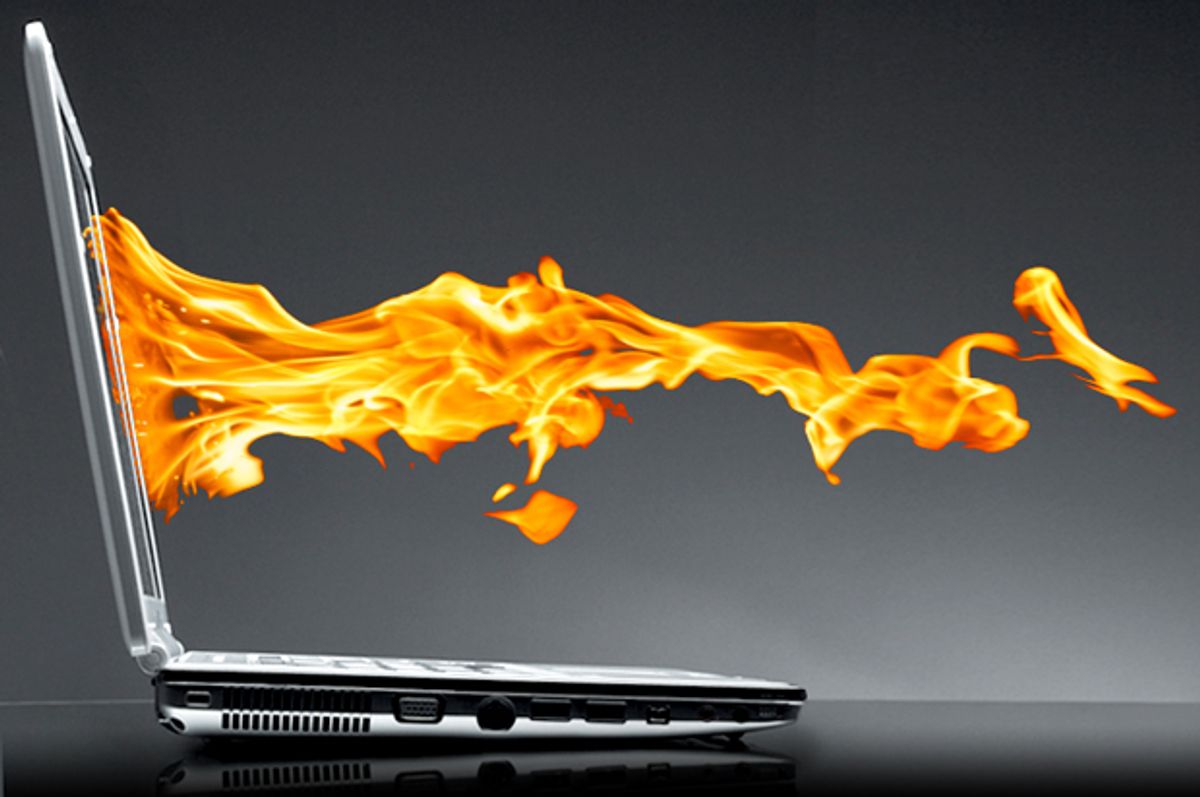 Last Tuesday, Reddit announced updates to its privacy policy that are intended to reduce the prevalence of "involuntary pornography" on the site. The updated guidelines, which stipulate that subjects of nude or sexual images posted to Reddit without consent may request the photos be removed, are a positive step to try and prevent "revenge porn" (or hacked, stolen photos) from appearing on the platform. But the change is not actually a preventative measure. Reddit has merely offered new recourse for people whose sensitive images appear online at someone else's will -- and yet, you'd never know that from the way some users are responding.

At Gawker, Sam Biddle has a round up of outraged responses to the policy, which range from unmitigated fury to conspiracy theories about Jennifer Lawrence. Here's a sampling from Biddle's digging through Redditors' comments:

InfinitelyThirting: "It's not a fallacious argument. Nudity is at least pretty clear-cut, but just 'sexily dressed' isn't, and the intent for posting it cannot be proven. Yes, it's obvious that /r/candidfashionpolice is just a new facade for creepshots, but they have deniability. Who are you going to appoint to decide what is "too sexy" to be posted? What about foot fetishists, for example, would they be able to get by because they're looked at feet and not traditionally sexualized body parts? And even if it is with the person's consent, how do you prove that? ... Reddit would have to ban all pictures of people, period. Anything an everything can be sexualized. You can't ban bad taste, not effectively. It's like in real life -- you can ban sexual harassment, but you can't ban leering, because it's just so hard to define."

8557: "Its a poorly worded policy as 'consent' is running counter to the rights of photographers and is not something that is captureable [sic] in EXIF information and 'nude' will be replaced by even more vague wording (how nude is nude, are breasts back to being 'sinful,' are we following Saudi definitions of 'nude,' what about newsworthy nude such as we see in fleeing refugees?) once Reddit gets again shamed in the mainstream media for the next overblown outrage. Its basically a bespoke rule for Jennifer Lawrence's PR people."

As much as it (really, really, really) pains me to type these words, I'll concede that there are some points worth discussing raised by the "songbirds all trapped in one big technolibertarian, hypocritical cage," as Biddle calls them. As I wrote in a critique of the policy last week, Reddit's definition of "consent" is wanting, to say the least. So too are its constraints for what constitutes a sexual image, though there's an argument to be made that the site hasn't gone far enough to prevent creepshots from appearing in places such as the aforementioned /r/candidfashionpolice subreddit.

But let's put the holes in Reddit's involuntary pornography policy aside for a second and circle back to what this is really about: involuntary pornography. Reactions against Reddit's efforts to remove such content from the platform seem to overlook, or to gravely misunderstand, that massive photo leak that happened just a few months ago, when hundreds of celebrities' stolen images were posted online without consent.

Whether or not Reddit is responding to the Fappening directly is irrelevant (though, it would seem, they are). What matters is that these sorts of (pornographic) privacy violations have happened and do happen, and there are very basic things that Reddit and other platforms can do either to try and prevent them from happening or from fixing them when they do.

That seems to be what Reddit is doing, and in a fairly unobtrusive way. So what the outrage really highlights is something we already knew to exist on the Internet: deeply ingrained, entitled misogyny that values only certain people's privacy, rights and freedom. And those people usually aren't women who decide to take photos of themselves naked, send them in confidence to others or keep them to themselves, and expect that those images won't end up on the Internet. What a totally violating move, to ask to have a violating image taken down!