My libertarian vacation nightmare: How Ayn Rand, Ron Paul & their groupies were all debunked

My family and I traveled last month to a Honduras city known for its libertarian ideals. Here's what happened next 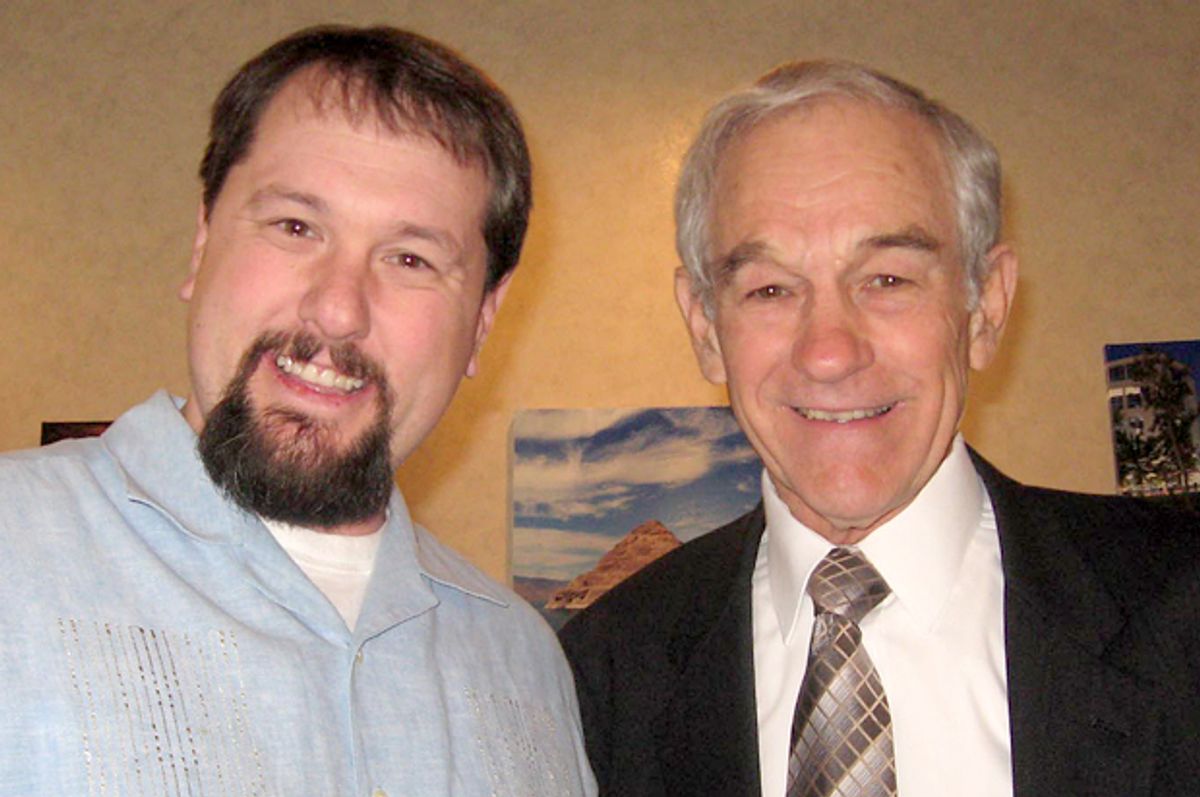 A photo of the author with Ron Paul
--

Last month, I spent my final vacation night in Honduras in San Pedro Sula, considered the most dangerous city outside of the war-torn Middle East. I would not have been scared, except that I traveled with my wife and our four children, aged 5, 7, 14 and 18.   On our last taxi ride, we could not find a van to fit us all, so we rode in two taxis. Mine carried me and my two daughters, aged 5 and 14, while the driver blasted Willie Nelson singing "City of New Orleans" (a city that is also considered very dangerous).

It was a surreal moment, traveling in one of the most dangerous cities in the world with my babies in tow.  I gave a nod to the radio. “Willie,” I said, and he gave me a grin and vigorous “sí.” There’s a lot of American cowboy culture in Honduras, but along with silly hats, Honduras has also taken one of our other worst ideas—libertarian politics. By the time I’d made it to San Pedro Sula, I’d seen much of the countryside and culture.  It’s a wonderful place, filled with music, great coffee, fabulous cigars and generous people, but it’s also a libertarian experiment coming apart.

People better than I have analyzed the specific political moves that have created this modern day libertarian dystopia.  Mike LaSusa recently wrote a detailed analysis of such, laying out how the bad ideas of libertarian politics have been pursued as government policy.

In America, libertarian ideas are attractive to mostly young, white men with high ideals and no life experience that live off of the previous generation’s investments and sacrifice.  I know this because as a young, white idiot, I subscribed to this system of discredited ideas:  Selfishness is good, government is bad. Take what you want, when you want and however you can.  Poor people deserve what they get, and the smartest, hardworking people always win.  So get yours before someone else does.  I read the books by Charles Murray and have an autographed copy of Ron Paul’s "The Revolution." The thread that links all the disparate books and ideas is that they fail in practice.  Eliminate all taxes, privatize everything, load a country up with guns and oppose all public expenditures, you end up with Honduras.

In Honduras, the police ride around in pickup trucks with machine guns, but they aren’t there to protect most people.  They are scary to locals and travelers alike.  For individual protection there’s an army of private, armed security guards who are found in front of not only banks, but also restaurants, ATM machines, grocery stores and at any building that holds anything of value whatsoever.  Some guards have uniforms and long guns but just as many are dressed in street clothes with cheap pistols thrust into waistbands.  The country has a handful of really rich people, a small group of middle-class, some security guards who seem to be getting by and a massive group of people who are starving to death and living in slums.  You can see the evidence of previous decades of infrastructure investment in roads and bridges, but it’s all in slow-motion decay.

I took a van trip across the country, starting in Copan (where there are must-see Mayan ruins), across to the Caribbean Sea to a ferry that took my family to Roatan Island.  The trip from Copan to the coast took a full six hours, and we had two flat tires.  The word "treacherous" is inadequate—a better description is "post-apocalyptic."  We did not see one speed limit sign in hundreds of kilometers.  Not one.  People drive around each other on the right and left and in every manner possible.  The road was clogged with horses, scooters and bicycles.  People traveled in every conceivable manner along the crumbling arterial.  Few cars have license plates, and one taxi driver told me that the private company responsible for making them went bankrupt.  Instead of traffic stops, there are military check points every so often.  The roads seemed more dangerous to me than the gang violence.

The greatest examples of libertarianism in action are the hundreds of men, women and children standing alongside the roads all over Honduras.  The government won’t fix the roads, so these desperate entrepreneurs fill in potholes with shovels of dirt or debris.  They then stand next to the filled-in pothole soliciting tips from grateful motorists.  That is the wet dream of libertarian private sector innovation.

On the mainland there are two kinds of neighborhoods, slums that seem to go on forever and middle-class neighborhoods where every house is its own citadel.  In San Pedro Sula, most houses are surrounded by high stone walls topped with either concertina wire or electric fence at the top.  As I strolled past these castle-like fortifications, all I could think about was how great this city would be during a zombie apocalypse.

On a previous vacation abroad, I’d met a resident of San Pedro Sula by the name of Alberto.  Through Facebook, we connected up to have drinks and share a short tour of his home city.  A member of the small, dwindling middle class, Alberto objects to his city being labeled the most dangerous in the Western Hemisphere.  He showed me a few places in the city that could have been almost anywhere, a hipster bar, a great seafood place (all guarded by armed men, of course).  Alberto took me on a small hike to a spot overlooking the city and pointed out new construction and nice buildings.  There are new buildings and construction but it is funded exclusively by private industry.  He pointed out a place for a new airport that could be the biggest in Central America, he said, if only it could get built, but there is no private sector upside.  Alberto made me see the potential, the hope and even the hidden beauty of the place.

For our last meal in San Pedro Sula, my family walked a couple blocks from our fortress-like bed and breakfast to a pizza restaurant.  It was the middle of the day and we were the only customers.  We walked through the gated walls and past a man in casual slacks with a pistol belt slung haphazardly around his waist.  Welcome to an Ayn Rand’s libertarian paradise, where your extra-large pepperoni pizza must also have an armed guard.

Part of the reason this discredited, libertarian bullshit still carries any weight for Americans is because so few of us travel.  Only 30 percent of Americans have passports, and if Americans do go places, it’s not often to Honduras.  On the mainland of Honduras, we saw no more than a handful of Americans.  I did see many more on the tourist-centric island of Roatan, but of course this slice of beach paradise is not at all representative of the larger country or its problems.  It has nonstop flights from the U.S. directly to the island so you can skip all the needless reality.

One can dismiss the core of near-sociopathic libertarian ideas with one simple question: What kind of society maximizes freedom while providing the best outcomes for the greatest number of human beings?  You cannot start with the assumption that a Russian novel writer from the '50s is a genius, so therefore all ideas about government and society must fit between the pages of "Atlas Shrugged."  That concept is stupid, and sends you on the opposite course of “good outcomes for human beings.”  The closer you get to totally untamed, uncontrolled privatization, the nearer you approach "Lord of the Flies."

These questions about how best to provide a good society are not being asked in Honduras, but they are also ignored in the United States as a matter of routine.  We have growing income inequality and government is being ever more controlled by a few extremely wealthy political donors.  Our own infrastructure is far from admired worldwide, and the trend doesn’t look good from where I’m sitting. We have yet to stop our own political rhetoric to address the basic question about what kind of place and in what type of society we want to live.

Society should not exist to make a few people fabulously wealthy while others starve.  Almost all humanity used to live this way, and we called it feudalism.  Many people want to go back to that sort of system, this time under the label of libertarian or “the untrammeled free market.”  The name is irrelevant because the results are the same.  In Honduras, I did not meet one person who had nice things to say about the government or how the country is run.  My takeaway from the trip is that living in a libertarian paradise satisfies only a few of the wealthiest citizens, while everyone else thinks it sucks.

Honduras has problems but people should go visit anyway and soon.  The dangers are fleeting, and there are coffee plantations to tour, ruins to see, cigars to smoke and fish to catch.  The people need your tourism dollars.  As a bonus, it’s important for Americans to see the outcome when the bad ideas of teenage boys and a bad Russian writer are put into practice.  Everyone believes in freedom, but it’s an idea both fetishized and unrecognizable when spouted by libertarians.  There can be no such thing as freedom, safety or progress of any kind, when an entire society is run for the benefit of a handful of rich assholes and global conglomerates.  If you think I’m overstating it, just go to Honduras and see it for yourself.