His Kennedy assassination lie is proven by a recording of O'Reilly himself. Why Fox's strategy may suddenly change 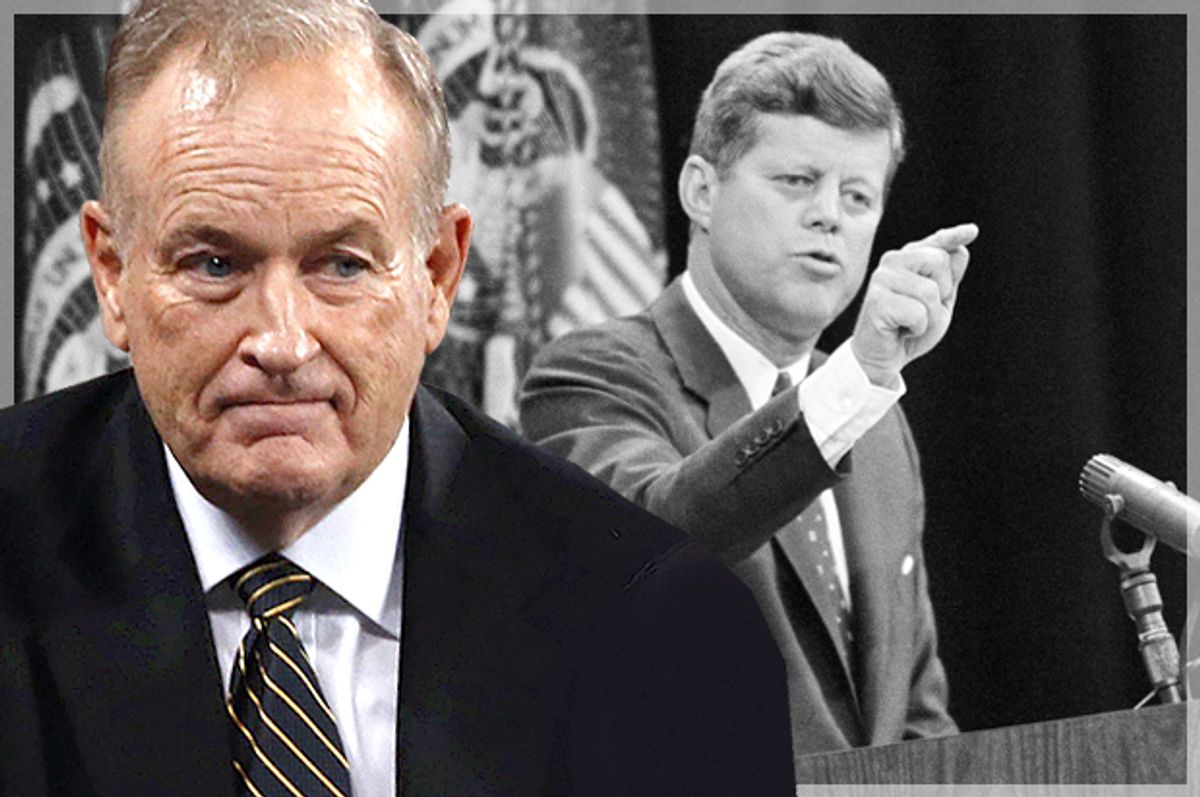 Writers and advocates on the left have long catalogued the exaggerations, meltdowns and many stumbles of Fox’s Bill O’Reilly, to show that the guy who runs the No-Spin Zone is frequently unfair and relentlessly unbalanced. But now O’Reilly has a different sort of watchdog in CNN media reporter Brian Stelter, host of “Reliable Sources” – and Stelter is attracting more company.

Oh sure, the Fox bully dismisses Stelter -- along with his critics at Mother Jones, Media Matters and, for that matter, Salon -- as just another left-winger out to get him. But that charge won’t stick. The bright, earnest, hardworking former New York Times reporter isn’t known for his ideological crusading; he goes after MSNBC, not just Fox. But when Stelter finds an important story, he digs in.

The CNN host just spent his second straight Sunday on the O’Reilly mess, this time advancing the story about what has become the most damning and incontestable charge against the Fox host: that he lied about personally hearing the suicide of a mysterious friend of Kennedy assassin Lee Harvey Oswald, in Palm Beach, Florida, back in 1977, just as congressional investigators were closing in on the source. O’Reilly told the lie in his book “Killing Kennedy” as well as on the air at Fox.

In his book, O’Reilly wrote of tracking George de Mohrenschildt, who’d lived in Minsk and became friends with Oswald and his wife, Marina, in Dallas, after they returned from a stay in the Russian city. Kennedy assassination researchers believe de Mohrenschildt was a CIA asset, and he’s implicated in a lot of theories about the real motive for Kennedy’s murder. O’Reilly doesn’t dig into that story, but he tells a dramatic tale of his search for the Oswald associate:

As the reporter knocked on the door of de Mohrenschildt’s daughter’s home, he heard the shotgun blast that marked the suicide of the Russian, assuring that his relationship with Lee Harvey Oswald would never be fully understood.

By the way, that reporter’s name is Bill O’Reilly.

There’s no evidence O’Reilly was anywhere near the shooting. In fact, two years ago Jefferson Morley obtained a tape of a conversation between O’Reilly and congressional investigator Gaetan Fonzi, which proves he wasn’t there. Morley, a former Washington Post and Salon editor, posted the tape on his site JFKFacts.org, a clearinghouse for assassination news.

But it wasn’t easy to hear. After Media Matters surfaced Morley’s reporting, CNN obtained a much more audible version of the taped conversation from Fonzi’s widow. It proves O’Reilly wasn’t on the scene when de Mohrenschildt died. You can hear Fonzi tell O’Reilly “he committed suicide,” as O’Reilly asks when and how (“they say he shot himself). The Dallas-based reporter wraps the conversation by saying, “I’m comin’ down there tomorrow, I’m comin’ down to Florida,” and as he discusses grabbing a flight, it’s clear he wasn’t anywhere close. “Bill O’Reilly did not hear a gunshot from 1,200 miles away,” Morley told Stelter Sunday morning.

The journalist and JFK assassination investigator took his findings to Fox News two years ago, he said, but got no reply. Since Media Matters revived the Morley story, Fox has referred all questions to O’Reilly’s publisher, which is mildly interesting, since on the other charges Roger Ailes has staunchly stood behind his anchor.

The Kennedy lie is different from the other charges against O’Reilly – although as the number of challenged O’Reilly claims mount, it’s possible to wonder how much more reporters have yet to uncover. Let’s take them in order.

When it comes to reporting on his exaggerations and falsehoods about his time covering the Falklands War and guerrilla uprisings in El Salvador, there is at least some confusion over the real story. Although it’s clear O’Reilly didn’t come close to combat in the Falklands as he claimed, he’s been able to produce enough conflicting accounts about the Buenos Aires riot that he did cover to at least cloud the charges against him. Likewise, he obviously, even ludicrously exaggerated the danger he saw reporting in El Salvador, but you have to sort through different versions of different war scenes to get the truth.

O’Reilly’s claims that he witnessed the murder of nuns in El Salvador – “I saw nuns get shot in the back of the head,” he said more than once – were debunked by Media Matters too. But the Fox host told Mediaite, one of his go-to defenders, that he was referring to seeing photos of the murdered nuns, not the actual murders. “No one could possibly take that segment as reporting on El Salvador,” O’Reilly sputtered. Critics widely mocked him, but he seems to be getting away with that one too.

Then former colleagues came forward in the Guardian to refute O’Reilly’s heroic accounts of his reporting on the 1992 Los Angeles riots. O’Reilly claimed “concrete was raining down on us” and “we were attacked by protesters,” but journalists on the scene with him say they faced no such violence, though a camera was smashed by an angry resident. Jon Swaine reported:

Two of the team said the man was angered specifically by O’Reilly behaving disrespectfully after arriving at the smoking remains of his neighbourhood in a limousine, whose driver at one point began polishing the vehicle. O’Reilly is said to have shouted at the man and asked him: “Don’t you know who I am?”

A Fox spokeswoman told Swaine the Los Angeles stories were “nothing more than an orchestrated campaign by far left advocates.”

That’s a lot of smoke, and O’Reilly critics clearly believe there’s fire. But Fox is able to use the “he said, she said” nature of some of the charges to polish its brand and trash its perfidious left-wing enemies in the media. The Kennedy story isn’t crumbling under that treatment, because we have a tape of Bill O’Reilly contradicting Bill O’Reilly. It’s a “he said, he said” conflict -- but the guy on tape is more believable than the guy writing the book.

I’m not going so far as to predict the Kennedy story will endanger O’Reilly’s perch at Fox. But this one might get other editors and reporters to take the story more seriously. It could encourage other former colleagues to bring more evidence about his serial exaggerating, even lies. O’Reilly may well survive this round of challenges to his credibility, but the stories aren’t going away any time soon.