The abortion I didn’t want

Afterward, I felt grief, emptiness -- and relief. Why don't we tell stories that are emotionally complicated, too? 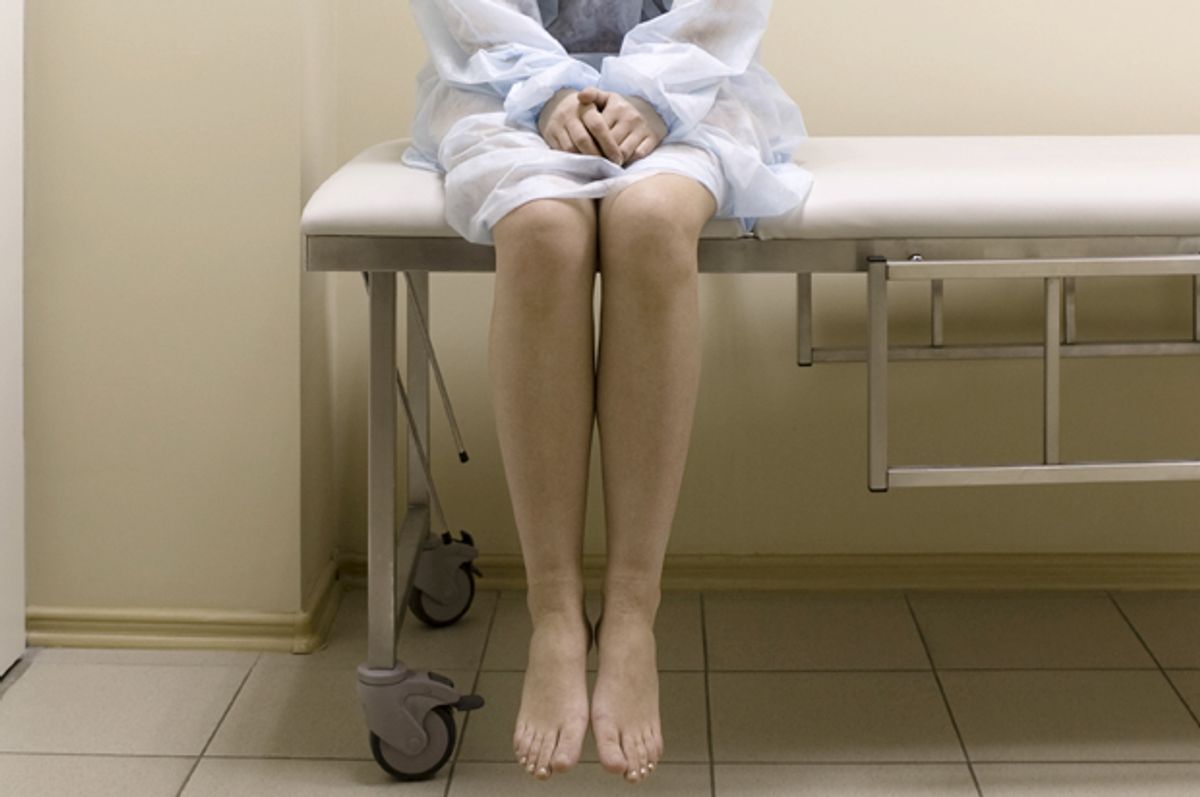 I’m lying on a table at a women’s health clinic being held down by three young clinicians while a doctor performs the procedure. There are tapestries and Georgia O’Keeffe prints on the walls. I can’t move or see what’s beneath my knees. My body resists; I do not want this. The hands restrain me until it’s done.

“You’re not pregnant anymore,” the doctor says, and then leaves the room.

A cold wind of grief blows through me.  My body feels empty, like a dried rind. X drives me home in silence. I lie on the bed and pull thick blankets over me, trying to turn off the resounding emotional pain. He leaves the house and goes on a walk. I take a pill to help me numb. It will be years before I begin to process this day.

Every abortion is a story. It might be mundane or dramatic, involve great sacrifice or great relief. Too often these stories live only in whispers between trusted comrades or tucked away in journals. Abortion is just one example of how women have grown accustomed to living with stories that never get told publicly. Mine is a story of an abortion I didn’t want but chose to go through with anyway. It’s a grief I live with. It’s my grief. I wouldn’t have it any other way.

I’d sung along with Fiona Apple the whole way on my drive across country to move in with X. “I’m going to make a mistake  / I’m going to do it on purpose.”

We barely knew one another. He was a rising literary star. I was a poetry fellow at an art colony where he did a reading and we struck up an intense long-distance connection. He was starting a new teaching job in a new city and proposed I come with him when my fellowship ended.

But I soon felt trapped at the walled-in college campus and struggled to find work. We argued about how to clean, whether to have a faux bearskin rug, how to play Scrabble, what to eat, whether marriage mattered, and how we might raise a child. When I told him my news, he said he needed to take a walk. When he returned, he looked at me with a defiant distance in his eyes.

“This is the worst thing I’m going to do in my whole life, but no part of me wants to take this journey with you.” It felt like someone was reading a horrible line from a play. I wanted to hand him a different line, and tried to, for weeks, months. I was in the kind of love with him that shocks the system with its compelling wrongness. We were in a standoff.

In the midst of it all, we named the fetus Malachai. I pictured a boy who was a combination of us both. X looked at me sideways and said we weren’t going to have a baby just because it would be “a cool color.” I was paralyzed by indecision, sleepy with denial and hormones. I made termination appointments and canceled them for one reason after another. I had the flu. I had the wrong insurance.

How do you think you’re going to do it, he kept asking, how?

I kept finding ways to defer my decision. A Kaiser clinic didn’t understand what “strabismus” was in my medical history. It wasn’t until being told I’d passed the date when a chemical abortion could be induced that I felt real fear. It is the kind of choice nature makes for you if you don’t make it yourself.

During my intake at the women’s clinic, I told them that I didn’t think I could say I wanted an abortion but that I thought they should do it anyway. Understandably, they didn’t know what to do with me. They took me into a room and counseled. “Are you sure? Have you explored all your options?” I told them I had.

They left me alone and argued among themselves. I just kept repeating my outrageous statement. At one point they tried to send me home.

“We think you should think more about it,” a clinician said. I was firm. I wasn’t leaving. But I couldn’t say I wanted it. Every alternative they offered made me shake my head no; I couldn’t say anything more affirmative than “you should do it.”

I needed to end my pregnancy — and not think about being an arbiter of life and death, at least not that day. I asked them to hold me down because I was afraid my body might resist. What they did for me that day was heroic and kind.

I think I’m not alone in feeling that to truly wrap my head around the enormousness of the choice that day was too much. The inevitability of this abortion felt bigger than me, and I needed to experience it as a great wave coming over me rather than as something I was doing.

The wave was a slow one: When will I feel better, I asked my friend from my bed cocoon after the procedure.

“Not until you have a baby,” she answered, from her own experience.

I believe life begins at conception but that doesn’t change the fact that women have dominion over the life inside their own. I grieved because I wanted a child. Maybe if I’d been less in love with X, or had a better job, or had more money saved, then I would have done something different. I had more resources than some, less than others.

The woman who had been my therapist through my adolescence and my parents’ troubled divorce said, “Sometimes it’s the ultimate act of generosity.”

If I had remained pregnant, I’d have been bringing into the world a child with a dearth of stability and a father who’d stated clearly he didn’t want him. I think I probably would have made it work somehow, but my wanting a child at that point was not compatible with the reality of my circumstances and it would have tied me irrevocably to a man I didn’t trust.

The distinction between grief and regret is an important one. I wanted to be a mother and knew I was terminating a potential life. When I did get pregnant again, years later, grief gave the experience an added gravity. Each ultrasound reminded me of Malachai. Each concern sent me down a spiral of thinking that I might somehow be punished, or that I had lost my one chance.

Did I make a choice? I now see that I did, despite my efforts to shroud it. Do I regret my actions? That’s a trickier question.

I had beers with my friend Gabe in San Francisco a couple of months after the abortion, and he counseled me not to be afraid of the word "regret." We all live with regrets, as death lives alongside life. Every meaningful relationship has regret in its DNA.  It doesn’t mean we’re doing the wrong things.

Merritt Tierce wrote last year in her incisive New York Times opinion piece, “This Is What an Abortion Looks Like,” that we need to stop categorizing abortions as justified or unjustified according to the amount of suffering a woman contends with. She argued that the personal contexts, the stories surrounding the abortion, are not relevant until we grant “each woman the right to make and do with her body what she will.”

Tierce is right in cautioning us against using the stories to justify the choice, but what if we all start telling them anyway, in all their great variance of comedy and pain until they are a normalized part of the human experience?

In 1984, my aunt, Kathleen McDonnell, a feminist who lives and writes in Canada, wrote a book called “Not an Easy Choice” in which she explores the silence women have to live with after an abortion if they feel grief. Any expression of sadness is pounced on as regret by abortion opponents. Women deserve both the complexity of the decisions that affect their bodies and the fundamental right to make them.

I didn’t want my abortion, but If I could close my eyes and return to that table, I would do the same thing. However painful the decision-making process, however fraught it is with ambivalence and paradox, it is ours. We aren’t simple. Some choices take years to understand. My abortion opened up the scope of my life in a way I couldn’t see clearly that day, and for that I am grateful.

Caitlin McDonnell is a poet/writer/teacher/mother who lives in Brooklyn.