"I think that she would do better if she was less angry and demonized less,” Buffett said about Warren's tone 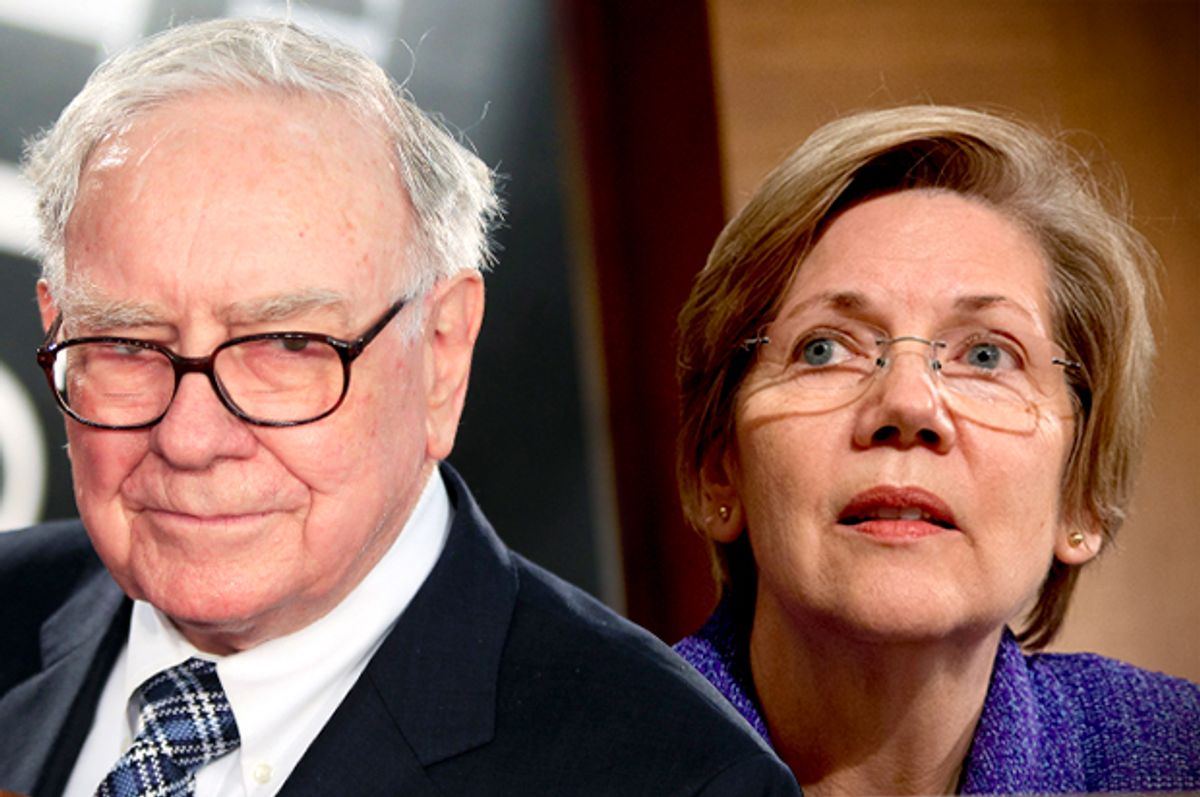 Warren Buffett thinks Elizabeth Warren should be “less angry” in her approach to politics. "I think that she would do better if she was less angry and demonized less,” the Berkshire Hathaway CEO said Monday, according to a report from Business Insider. “I believe in 'hate the sin but love the sinner.’ And I'm not sure that I've fully convinced Elizabeth Warren that that's the way to go.

"I think the whole nature of governing -- particularly when you've got a divided government like we have now -- is that you end up with bills that each side doesn't like but they like it better than doing nothing," he continued. "I mean, that's the way that government has to function. And it does not help when you demonize … the people you're talking to."

Buffett has written extensively about how the Wild West-nature of our financial system and our tax code has produced unprecedented economic inequality while lining the pockets of rich men like himself. This is why he's the left's very favorite billionaire. His beef isn’t with the substance of Warren’s politics, it’s with her tone.

The problem for Buffett is that Warren sometimes gets mad when she talks about a system that manufactures poverty. She is also quite direct when holding regulators and her fellow lawmakers to account for propping up that system.

Now I don’t think it’s controversial to point out that Buffett’s comment -- effectively telling Warren to smile more when critiquing a violently inequitable system -- is sexist. And it’s not going to blow anyone’s mind to point out that his comment can be sexist even if he didn’t mean it that way. That’s how unconscious bias works. We think we're speaking neutrally, but we're actually enforcing incredibly narrow and punitive norms.

This isn’t unique to billionaires on morning news shows, obviously. A recent report on performance reviews for nearly 250 tech company employees found that women are much more likely to receive critical feedback than men -- even in positive reviews.

Here’s how Kieran Snyder described what she found in her research:

Words like bossy, abrasive, strident, and aggressive are used to describe women’s behaviors when they lead; words like emotional and irrational describe their behaviors when they object. All of these words show up at least twice in the women’s review text I reviewed, some much more often. Abrasive alone is used 17 times to describe 13 different women. Among these words, only aggressive shows up in men’s reviews at all. It shows up three times, twice with an exhortation to be more of it.

Other studies have found pretty much the same thing. Women are punished when they seem angry. (Women are also told they are angry when they are not angry. So there’s that, too.) Men generally don't receive the same treatment. Think about other politicians out there right now. Try to remember the last time someone told Ted Cruz or Scott Walker to cheer up.

That is, in a word, bullshit.

Lawmakers advance policies and those policies have real, lived consequences for millions of people. The systematic dismantling of the modest reforms made after Wall Street nearly destroyed the country six years ago is not a naturally occurring phenomenon, it’s a process being driven by people with entrenched interests. Warren has been explicit about that, and has held individuals accountable to varying degrees of success.

Calling out lawmakers who advance policies that prop up corrupt institutions at the expense of millions of workers or deprive low-income parents of the ability to feed their kids or restrict access to abortion for women who can't pay for the procedure out of pocket is not being partisan, divisive or launching an ad hominem attack. It's connecting outcomes back to policy and saying, These are the policies that have gotten us into this mess, and these are the people pushing to make that mess worse.

The kind of compromise Buffett is asking for in his comment about Warren is the kind of compromise that results in Democrats and Republicans coming together to cut billions from federal food assistance programs. But there is, of course, room for compromise and common ground in politics. (I think that universal preschool and healthcare is pretty consistent with a pro-life position, for example.) But pretending that congressional dysfunction is a matter of tone and discourse instead of entrenched monied interests derailing policy after policy that would rein in Wall Street or meaningfully address rampant poverty is naive to the point of being absurd.

Elizabeth Warren could be making people tea and handing out back massages while trying to reform our financial system and she'd still be facing the same level of opposition. And that opposition, by the way, is also coming from inside her own party. When you're taking on a system that causes mass misery and poverty, it's not demonizing someone to point to their policies and say they have blood on their hands.