Why Hillary Clinton is moving up her 2016 start date

The plan was to launch in July. Now the former secretary of state may announce next month 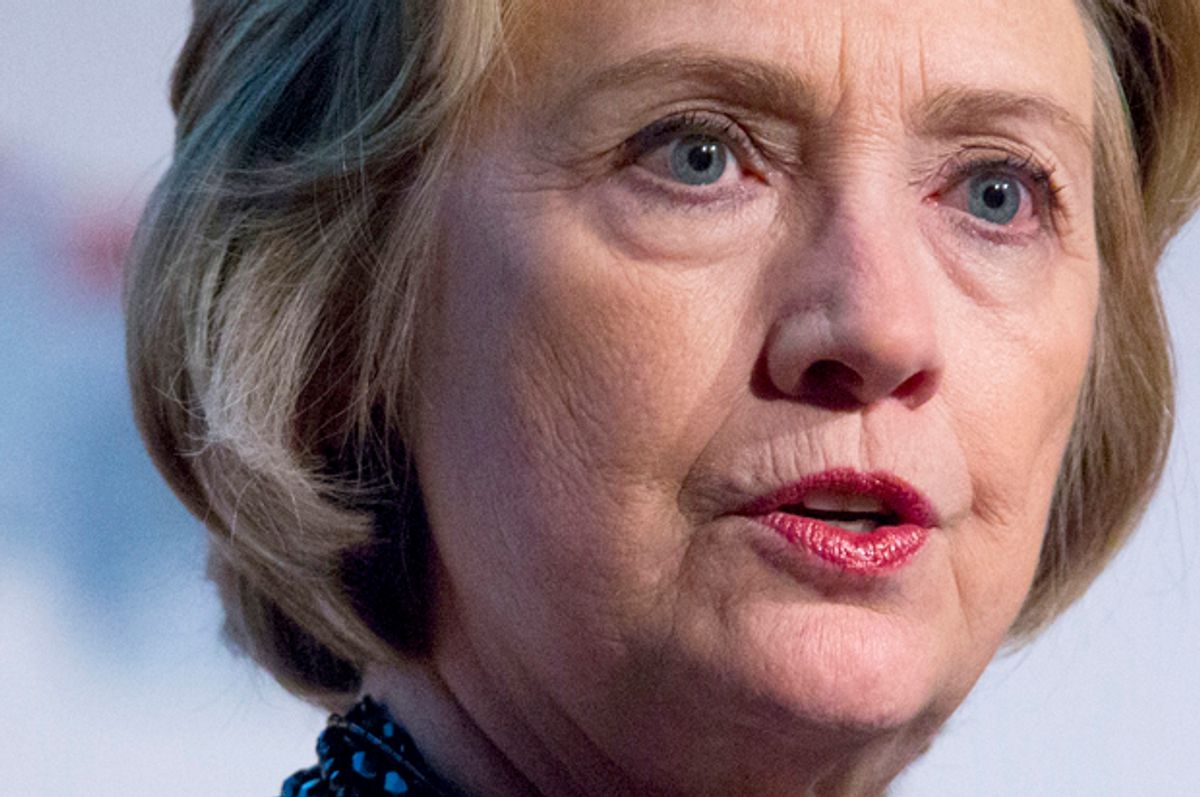 Just over a month ago, Politico's Mike Allen revealed that Hillary Clinton, once likely to launch her 2016 presidential campaign in April, was instead leaning toward a July kickoff. Those inside the Clinton orbit argued that delaying her announcement would afford the former secretary of state crucial time to hone her message, formulate policy proposals, build a cohesive campaign team, and avoid the heightened media scrutiny that comes with an official campaign. Hillaryland's thinking, however, has shifted once again. The Wall Street Journal reports that Clinton's camp has returned to their original April target, the better for Clinton to allay Democratic anxieties and begin collecting the hordes of cash required to conduct a modern national campaign.

An April declaration is no done deal. The Journal reports that some within Clinton's circle believe that waiting until summer will keep her "out of the fray." (As Republicans' withering attacks on Clinton at last week's Conservative Political Action Conference attest, though, she's already very much a part of the fray.) But other Clintonites -- including John Podesta, slated to become campaign chairman -- argue that she should start sooner than later, and Clinton is reportedly signaling that she agrees.

Though there's no doubt at this point that Clinton will proceed with a second White House bid, a number of donors "don't want to make big pledges until she is a candidate," the Journal relates, and with Clinton hoping to raise no less than $1 billion for the campaign, those reservations seem to be moving her. Should Clinton announce her campaign next month, however, that move would be borne of more than financial concerns. With Republicans castigating Clinton for her State Department record, hefty speaking fees, and even her recent absence from the political limelight, it increasingly appears that the risks of going all in early -- not least of which is that Clinton's popularity ratings decline as soon as she reenters the arena -- may be no greater than the risks of biding her time. If Clinton allows months of Republican attacks to go unanswered -- at least by an official campaign apparatus -- she may take even more of a beating in the media and the polls than she would simply by becoming a public candidate.

I use the phrase "public candidate" deliberately. For a good long while, Clinton has been a private one -- commiserating with upwards of 200 policy experts, poaching people like Podesta and communications director Jennifer Palmieri from the Obama administration, and settling on a campaign manager and pollster. Publicly, Clinton insists that she's still weighing her options. "I am obviously talking to a lot of people, thinking [it] through," as she told a Silicon Valley conference last week.

Nobody believes that Clinton is genuinely undecided -- not the political press corps, not the Democratic establishment, not the Republicans, and certainly not the people leaving plum posts to work for her. But if she continues for months more as a private candidate, all the while maintaining a public front of indecision, Clinton risks exacerbating the perception that she feels entitled to the presidency -- a perception that turned many voters and party bigwigs off to her 2008 bid. Seven years later, Clinton is in a much stronger position to capture the Democratic nod, but the longer she freezes the field in place and avoids making her case before real-life voters, the more she conveys that she believes the nomination is hers. People on the ground in Iowa, where Barack Obama dealt her a devastating blow in 2008, are saying as much.

I readily concede that I initially thought it made strategic sense for Clinton to hold off on announcing her campaign, citing many of the same factors that people within Clinton's camp raise to argue for a later launch. I no longer feel so certain. Since then, the same kind of internecine conflict that crippled her 2008 campaign has spilled into public view, and the Clintons been confronted with media reports on the family foundation's solicitation of funds from foreign governments -- including one donation, from Algeria, that violated then-Secretary Clinton's ethics agreement with the Obama administration. Announcing a campaign won't magically resolve internal disputes or put legitimate questions about influence peddling to rest, of course. But Clinton could at least stanch the bleeding by moving to assert control over her multi-factional operation, and ending the foundation's practice of raking in foreign funds, as the launch of a campaign would likely entail.

Also a matter of concern: While Clinton's intra-party rivals have hitherto been reluctant to criticize her, they're gradually shedding that reluctance, and the recent spate of negative headlines is unlikely to reverse this trend. Vermont Sen. Bernie Sanders, an independent weighing a run for the Democratic nomination, gently chided Clinton in late January: "Based on her history, do I think she is going to be as bold as she needs to be in addressing the major crises that we face? Probably not. I may be surprised."

Former Maryland Gov. Martin O'Malley, who supported Clinton in 2008 but now has his eye on the Oval Office, was a little more forthright during an address in South Carolina this weekend. Though he didn't name names, he delivered an unmistakable jab at Clintonian centrism, telling Democratic voters, “The most fundamental power of our party and our country is the power of our moral principles." Sharpening his progressive pitch, he then went for the jugular: “Triangulation is not a strategy that will move America forward. History celebrates profiles in courage, not profiles in convenience.”

While neither Sanders nor O'Malley currently poses a serious threat, they're reminding Democrats why they jettisoned Clinton in 2008. She, undoubtedly, has taken note.